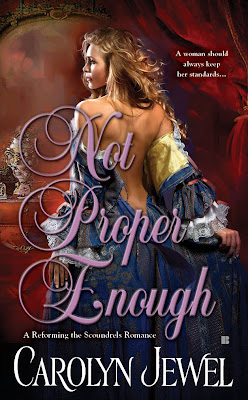 It’s release day for me. This time, book two of my Reforming the Scoundrels series. I hope you’ll join me in the fun and perhaps rush out to get your hands on the book!

Because of the way I write, I never know what’s going to happen for sure until I have the words on the page. I was nervous knowing, while I was writing the first book (Not Wicked Enough), that I was going to have to write this second one with some facts already established. Ack!! Things I can’t change when it’s their turn?

In Not Wicked Enough I wanted to keep some things vague as to Eugenia and Fenris so as not to write myself into trouble with them. But I couldn’t be so generic that they weren’t interesting. They also needed to serve the needs of Not Wicked Enough. That had to come first.

As I was writing Not Wicked Enough, I had (for me) a fairly definite idea of who Eugenia was, not a huge surprised since she’s my heroine’s best friend. She had a good amount of page time. But Fenris? In Not Wicked Enough, he wasn’t anyone’s friend. Nobody liked him. I knew he’d done something unforgivable. I just didn’t know what.

That’s right. I started writing Not Proper Enough under a wicked tight deadline and without knowing what my hero had done that was so awful. I knew it would work itself out, because, after 16 assorted books, stories and novellas, it just does. My writer’s brain is always hard at work for me. I just have to give it room and not panic for long.

About Not Proper Enough

The Marquess of Fenris has loved Lady Eugenia from the day he first set eyes on her. Five years ago, pride caused him to earn her enmity. Now she’s widowed, and he’s determined to make amends and win her heart. But with their near explosive attraction, can he resist his desire long enough to court her properly?

After the death of her beloved husband, Lady Eugenia Bryant has come to London to build a new life. Despite the gift of a medallion said to have the power to unite the wearer with her perfect match, Eugenia believes she won’t love again. And yet, amid the social whirl of chaperoning a young friend through her first Season, she finds a second chance at happiness.

Unfortunately, the Marquess of Fenris threatens her newfound peace. Eugenia dislikes the man, but the handsome and wealthy heir to a dukedom is more charming than he has a right to be. Constantly underfoot, the rogue disturbs her heart, alternately delighting and scandalizing her. And when their relationship takes a highly improper turn, Eugenia must decide if the wrong man isn’t the right one after all.

Read Chapter 1 of Not Proper Enough

I love how blunt this romance is too. It’s dirty and fierce. Eugenia almost revels in the fact that she hates him, yet can’t seem to shake him off. They take pleasure from each other, sometimes rough, sometimes drawing it out as long as they can. The romance in this book is so intense that you can’t help but feel the chemistry between these two. I feel like this is where Carolyn Jewel shines. Not just her amazing sexual relationship she builds for her characters, but their overall interactions. Their banter is so smart and fast. Humor, put downs, sarcasm, it all comes through so well. These are two mature people who have been through a lot in their life and watching them come to terms with each other is really a treat.

With her engaging, complex characters, knowledge of the era and a sharp ear for dialogue, Jewel creates a nicely written, highly sensual and emotional love story.
RT Magazine

As always, Carolyn Jewel’s writing is polished and her characterizations delightful. With a story that is by turns very hot and very emotional, I found myself relishing the experience of reading this book.
Lynne Spencer, All About Romance

This was another delicious, detailed, smoldering romance from Carolyn Jewel.
Rogues Under the Covers

I highly recommend all historical romance lovers go out and pick up this book. You will not be disappointed.
Fiction Vixen

OH MY GOODNESS! What an awesome book! I loved every minute of it. Talk about a page turner that I couldn’t put down. First off, the story line was moving and shocking at the same time. Not Proper Enough kept me wanting more. To be honest it would be one of those books to re-read again. That right there says a lot. So, I hope that you all get a chance to check this book out when it comes out. Plus, you all want to know if Fenris is able to change Eugenia’s opinion of him.
The Cutest Blog on the Block

Find a store through BookSense

I hope to have the file ready to go fairly soon!

Congratulations, Carolyn! I have been looking forward to reading your book, and am so glad it is out now.

Bought my copy today! Can’t wait to read it!

Great reviews, Carolyn!
Way to go.
I love romances where the hero and heroine hate each other but still have that attraction.

Sounds intense. I like characters who can take it and give it right back. It makes the sparks fly and the action interesting.
Love the colors of the cover.

That is such a stunning cover…

Even though I think heroines ought to wear undies, I think that cover is luscious. Congrats on all the amazing reviews!