If you follow my Diane Gaston Blog, you will know that my father-in-law was hospitalized last week necessitating my quick trip to Williamsburg where the dh’s parents live. It turned out he had pneumonia and a flu virus, but they had feared he had one of those antibiotic resistent “superbugs.” Not the case, thank goodness.

After two days of hospital treatment, my father-in-law came home on antibiotics and was really in pretty good shape, up and around, alert, only a little slowed down physically. His illness made me wonder, though, what it might have been like if he’d lived in Regency times. 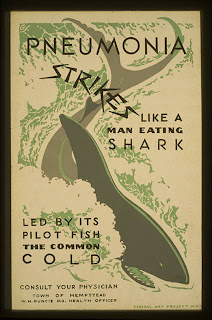 In 1918, Dr. William Osler, the father of modern medicine, called pneumonia the “captain of the men of death.” Indeed, it is now thought that a great portion of the 600,000 deaths in influenza pandemic of 1918 were due to bacterial pneumonia which took over after the flu virus compromised the immune system.

In Regency times, pneumonia was called “peripneumony”or inflammation of the lungs. It was treated with bleeding, at least until the patient was able to expectorate. After bleeding blisters were applied. Blistering was the practice of applying plasters to the skin with caustic substances that caused blisters. The blisters would pull the diseased humors from the body and then would be drained. Other treatments included enemas, sweating, and, probably most effective, concoctions that would promote coughing or “expectoration.”

I’m always appalled at how the treatments of illness in these early times seemed to put more strain on the body than would provide relief. (Although we now know bloodletting is an effective treatment for a few very specific conditions) Luckily today we have antibiotics and immunization to combat pneumonia so that it is no longer the “captain of the men of death.”

Have you come across any alarming treatments used during Regency times?

Stop by my website and see my newest bookcover – for Born to Scandal coming out December, 2012. Read a sneak peek.

And glad I don’t live back then. Though I think we do have many of the same unwise impulses, but we’re protected from making truly unwise decisions. That is, we, too, want to “do something” when someone is sick — often enough leading to us doing unnecessary and sometimes costly things which will have no effect. (Thankfully, though, most of ours have no evil side effects.)

I recall reading once that if one looks at 19th century medical texts about syphilis, one can see that at least half of the symptoms they described were actually symptoms of mercury poisoning….

So glad to hear your father-in-law is on the mend. Pneumonia is scary and definitely must be taken seriously.

I had a bout of it winter before last and it was tough to shake. I ended up on bed rest for a week.

Those treatments are horrifying. And some of the quack remedies for venereal diseases were equally as foolish and sometimes deadly. Sleeping with a virgin to cure VD? Really?

I’m so glad your FIL is doing better!!

I’ve been doing lots of research lately on Tudor England, and any time I read about the last days of Edward VI I feel very squeamish. The treatments only made a terrible death far, far worse, but one book I read said they were “tenderly inflicted”…

Interesting point about mercury poisoning, Cara! I think you are right about feeling the need to do something

Louisa, yes, pneumonia is very dangerous. It must have been scary to have it.

Lots of the treatments during the Regency sound dreadful!!!

Amanda, I had to read about Edward VI and how he died. Pneumonia, typhoid, or….poison???

My mother-in-law is recovering from pneumonia too–unfortunately she has a number of complicating conditions. In short, my daughters will never ever smoke.

I did a lot of reading on the history of pregnancy and childbirth. Some very scary stuff when forceps births first became the rage… Not good.

The biggest problem with forceps was that many jumped on the bandwagon and could use them without training, proper sanitary procedures, etc… They were touted as the quicker and safer way to give birth. By the Regency there had been so many problems that the medical profession backed off and forceps were supposed to be used as a last resort. Croft, who attended Princess Charlotte’s tragic labor, was severely criticized for not having tried forceps. No one can say for sure if it would have helped, though.