Today, of course, is September11.  It seems impossible that 11 years have gone by since that day, which no one here will ever forget.  As the building goes on for monuments in NYC and elsewhere, I thought I would take a quick look at another memorial built to commemorate a terrible event–the Great Fire monument in London. 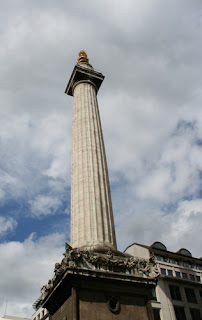 The Great Fire started in a Pudding Lane bakeshop on September 2, 1666, and nearly wiped out the entire city (old, brittle, and built mostly of wood) before it was contained several days later.  The Rebuilding Act of 1669 specified that some sort of memorial be built “the better to preserve the memory of this dreadful visitation.”  It wasn’t until 1671 that the City Council approved a design, and 6 years before it was complete (plus another 2 before the inscription was finished!).  The final cost was 13,450 pounds. 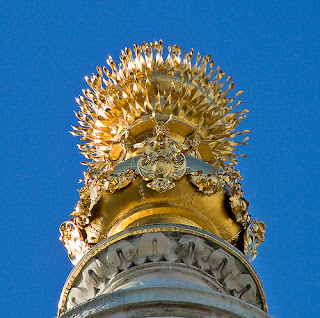 It’s a fluted Doric column of Portland stone topped with a crown of gilded flames at Monument Street and Fish Street Hill, 200 feet tall and 202 feet from the spot where the fire started (it’s said if the column topples that way it would land on the exact spot).  It’s on the site of St. Margaret’s, Fish Street, the first church destroyed in the fire.  The top is reached by a narrow winding staircase of 311 steps (a cage was added in the 1840s to prevent suicides).  I am very claustrophobic, and have never tried this myself, but I hear the view is amazing! 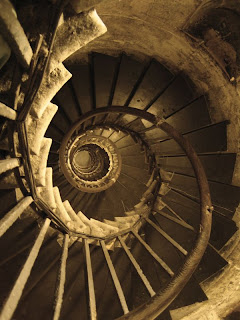 The base is inscribed on 3 sides–the south describes the actions King Charles II took following the fire, the east how the monument was built and the mayors who oversaw it, the north how the fire started and was finally contained (a line about “Popish frenzy” was erased in 1830), and the west is a bas relief sculpture of Charles II and his brother the Duke of York, surrounded by Liberty, Architecture, and Science, directing the restoration of the city. 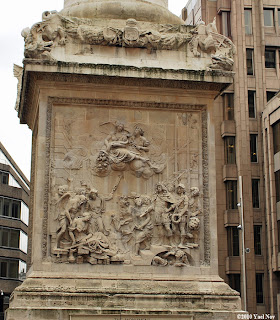 (For more info on the fire itself, look here…)

Have you ever seen this monument?  What is the most moving/interesting/beautiful memorial you’ve seen??

It’s quite a climb, but the views are amazing. It doesn’t feel claustrophobic, either on the stairs or at the top. The “cage” is just metal railings which from memory are positioned quite high and don’t feel enclosing.

It’s wonderful to think that the Monument has been there so long and that the Fire is still remembered. One fascinating aspect is that the old street plan which had grown haphazardly by osmosis over centuries remained almost unchanged when re-building took place – Londoners resisted attempts to take the opportunity for a modern grid with wide streets, wanting instead to rebuild exactly where they had lived before.

We must not have seen it on our London trip, Amanda. It is too beautiful to forget.

May we all remember 9/11. How sad that we were more together as one nation than we are now.

I’ve been to London a few times but can’t remember having seen this monument.

There was a temporary coming-together after 9/11 but I am saddened at so much of the splintering afterwards, especially for Muslims I know who’ve been demonized for an act they deplore as much as anyone.

I have visited London a few times and I’ve never seen this monument. I will definitely seek it out the next time I visit London. One of the most moving monuments I have seen is the weeping angel over the mass grave which probably holds Mozart’s body. Such a singular monument to a man gone before his time.

And like many of you I truly wish our nation could come together without a tragedy like 9/11. It shouldn’t take something so awful to remind us we are all Americans, we are family and we need to help each other whenever and wherever we can.

And it is a terrible tragedy that we now seem to live in a world becoming ever more divisive.

Oops, hit send too fast!! I meant to add that after the Fire, the “papists” and foreigners were blamed for something that obviously they had nothing to do with (they were an easy target for so many things then). Some things sadly do not change

I climbed the Monument the first time that I ever went to London when I was sixteen. I vividly remember counting exactly how many steps it was until we got to the top. And I agree with Helena that it is not claustrophobic and the view is magnificent.

I’ve got a certificate proving I climbed all the way to the top of The Monument! My favorite part is that it’s so easy to find: just get off the tube at Monument, then look around for something monumental. (BTW, I think the Great Fire of London was caused by Mrs O’Leary’s cow. I mean, wasn’t everything?)