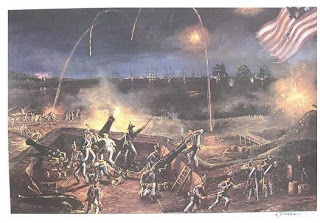 Today’s the day in 1814 upon which poet Francis Scott Keyes composed The Star Spangled Banner which was adopted as our national anthem in 1931. He was inspired by witnessing the end of the bombardment of Fort McHenry during the War of 1812, where the British retreated after shelling the fort for over 24 hours, and, so the legend goes, as the smoke cleared, Keyes viewed the flag still in place.

Keyes was visiting the British flagship the Tonnant, to negotiate for the release of one Dr. William Beanes who had been captured when the British invaded Washington. Letters from wounded British officers praising Beanes persuaded the British to release him, but they kept Keyes and his companions aboard ship, fearing they knew too much about the proposed invasion of Baltimore. Keyes, inspired, scribbled his poem on a scrap of paper and thus a legend was born.

Except … you must have noticed the words don’t quite fit. It’s difficult to sing, requiring you to squeak up tosome fairly high notes (most people have a range of about an octave and this requires a range of about an octave and a half). Keyes didn’t write the tune; instead he suggested that it should be sung to the tune of a 1776 drinking song called To Anacreon in Heaven, the theme song of the Anacreontic Society, a London drinking club. Anacreon, a 6th century BC poet, wrote extensively about women and wine. You can see more about the club and the text of the song at ColonialMusic.

I looked around for a version of the original on youtube and came up with this, which sounds historically correct tho there is no picture, the subtitles are odd and it sounds as though someone is splintering small pieces of wood during the recording (but don’t let that put you off). The song had a history of being recycled on this side of the Atlantic, with two earlier versions, Adams and Liberty–the Boston Patriotic Song and Jefferson and Liberty. It was a favorite of Keyes himself, who’d written another version in 1805, When the Warrior Returns, a tribute to Stephen Decatur.

If you’re in Baltimore or plan to visit, check out the Flag House (where the original star spangled banner that survived the battle was made) and Fort McHenry.

Also in a couple of weeks there’s a bombardment of books and authors at the Baltimore Book Festival takes place and I’m on various panels and reading on Friday afternoon/evening. More about that later.

What’s your favorite legend or reality of American history?

There really a lot to see and do in Baltimore. I will go with Paul Revers ride as my favorite legend/American historical event. A side note… I know the anthem is hard to sing but it still amazes me how many people forget the words.

Me too! There’s always lot of mouthing and mumbling in the middle. I think it’s interesting that the tradition of the a capella solo has developed, because the original Anacreon song would have been a part song–presumably improvised since the music shows only a solo line. I used to own a recording of this and other drinking songs sung by a quartet and it was quite wonderful.

I sometimes wish we could switch to something like “America the Beautiful”–easier to sing and lyrics that focus more on the country. But tradition is tradition, I guess.

The book festival sounds like a wonderful event. There are many all over the country, but none close enough for us to conveniently attend.

My favorite reality/legend is Sacagawea. She kept up with the “guys” and did it while pregnant, then with an infant she was nursing in tow. I would like to have seen the men manage as much.