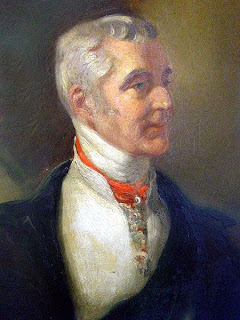 September 14 was the 160th anniversary of the death of the Duke of Wellington, who died of a stroke that date in 1852. Naturally at such a time I’ve been thinking of “Dear Artie,” as Kristine Hughes (my rival) and I fondly call him.

Not long ago I came across a book in the public domain called The Letters Of The Duke Of Wellington To Miss J. Remarkably, for 17 years the duke engaged in a correspondence with a young woman who was bent upon saving his soul.

Miss J was the daughter of member of the gentry who was left in fairly comfortable means after the early deaths of her parents. She received the finest schooling along with other young ladies of the aristocracy and lived with an elderly companion afterward.

At an early age she became a religious zealot, devoting her life to God and turning away from worldly matters. She rejected a suitor because he did not meet her exacting spiritual standards. Shortly after she and a friend managed to convert a condemned criminal, Miss J felt embolden to take on a new charge. She took the bold step to write to the Duke of Wellington, presumably to offer her services to convert him to a life of righteousness. At that time the duke, after having been Prime Minister, was Peel’s Foreign Secretary and was to continue to be very active in political life for several more years. Nevertheless, he answered this young woman’s letter. After she delivered the gift of a bible to him, he called upon her.

It is hard to imagine why this busy, important man might trouble himself with any involvement with a much younger woman bent on saving his soul. He was three years a widower and 64 years of age at that time and perhaps was looking back on parts of his life with some contrition. Or perhaps he was flattered that a young, beautiful woman was enamored of him.

He did appear to become infatuated with Miss J for a time, professing loving her, which seemed to have scared her enough to forbid him any more in-person visits. Her diary, though, seemed to convey her belief that God was calling her to eventually marry the Duke of Wellington. The duke, however, remained worldly enough that he would not risk being held up to ridicule for marrying a woman young enough “to be his granddaughter,” as he put it to her.

Their correspondence continued, but not without trouble. A year later, Miss J becomes affronted because a letter from the duke arrived with a plain seal, which she took as a deliberate slight to her consequence. She threatens never to write him again. When he doesn’t write her back fast enough, she fires off another letter.

Here is the duke’s reply

“My dear Miss J., — I always understood that the important parts of a Letter were its Contents. I never much considered the Signature; provided I knew the handwriting; or the Seal provided it effectually closed the letter…”

He goes on to explain that he often doesn’t personally seal his letters, that the task is often performed by s secretary, and because he writes many letters the seal becomes too hot to use and another seal is employed. He does promise not to repeat the slight should she wish him to continue writing her.

Shortly after, Miss J perceives herself called by God to continue writing to the duke and he accepts her letters and writes in return. The letters persist for years, weathering other times when Miss J again feels slighted.

In 1850, Miss J suffers from poor health and financial reverses. At the urging of her sister who had come from America to tend to her, she asks the duke for financial assistance. He immediately writes back that she is but to tell him the amount she needs and the bank to which it should be sent and he will happily assist her.

But Miss J does not deal in such worldly matters. She leaves it to the duke to figure out how much to send and how to get it to her. There are letters back and forth regarding this matter, until he finally devises a plan to send her the money. All she has to do is sign for the receipt of the package.

Miss J finds this too worldly for her and refuses to sign anything. At this point it appears the duke has had it with her. He writes several formal, terse letters to that effect and states that she should not trouble herself to write him again.

She persists in writing him, letters he only answers from time to time to send a terse message that she should not write him again.

She had a letter ready to post to him when her physician visited and told her of the Duke’s death. She feared he did not make it into the Kingdom of God.

Miss J’s finances forced to go to America to live with her sister, but her sister apparently could not abide what then had become Miss J’s even more religious extremes. Miss J lived alone in New York until her death in 1862.

I found this a fascinating part of “Dear Artie’s” life and I loved reading his letters when he employed a sarcastic tone. Poor Miss J! Her religious feelings seem to have begun in a great desire to live a good life, but ended in her being estranged from two people who were prepared to love her–her sister and The Duke of Wellington.

Come to my Diane Gaston Blog this Thursday Sept 20 when my guest will be my friend, Darlene Gardner, talking about her latest Superromance, The Truth About Tara. Darlene will be giving away a free copy of Twice the Chance, her Holt Medallion award of merit winner.

It sounds like she never quite grew up. Sad.

I think she had a genuine vocation at first, but mistakenly thought that her needs were more important than her charity towards others. It is amazing that the duke put up with her as long as he did.