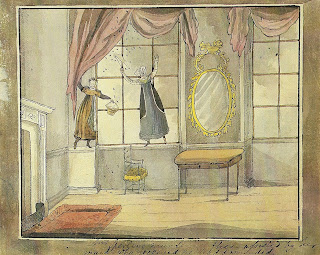 This weekend we had an ant infestation in our kitchen. Naturally, this would happen when the exterminator wasn’t available. We had to battle the army of ants all by ourselves. I went to the internet to see what weapons we might use against this assault.

I now know more than I ever wanted to know about ant control. Turns out you not only have to remove the temptation (In this case, sugar. Apparently some ants have a sweet tooth; other ants crave other things), you have to interrupt their scent trails. I wiped everything down in vinegar, but that didn’t seem like enough. One of the suggestions was to spray a mixture of essential peppermint oil and water in the areas where it was suspected the ants entered. Well, I had essential peppermint oil, but I didn’t have a spray bottle. Besides, I thought, if a dilution of essential oil would work, how much better could it be if I didn’t dilute it?

I sprinkled full-strength peppermint essential oil all around the window and the sink.

Five hours later, the scent of peppermint was still so strong it made us all feel sick. It made even pizza taste funny.

Today we’ve seen some strays, but I’m still hopeful we’ve solved the problem. I got to thinking. What would a housekeeper have done about an ant infestation in Regency times?

I could not find out what they would have done about ants in Regency times, but I did learn a little about “bug control.”

This is from The Art of Cookery Made Plain And Easy; which Far exceeds any Thing of the Kind yet published by Mrs Glasse (1784) The Toilet and Cosmetic Arts in Ancient and Modern Times by Arnold J. Cooley (1866) tells about how to get rid of parasites, like the head louse (stiff brush, “occasional” soap and water, and pomade), the body louse (regular bathing), and the crab louse (a solution of corrosive sublimate and sal-ammoniac in soft-water), but I can hardly bear thinking about having to battle such bugs. Cooley also recommends tobacco smoke to drive away insects, such as mosquitos, gnats, and bed bugs. That just goes to show that insects aren’t dumb enough to want to breathe in tobacco smoke.

Have you come across any other Regency era insect exterminating practices?
Or, how do you get rid of ants?

Look for a new contest at my website today!

*The picture is “Mrs Sperling Murdering Flies” from Mrs. Hurst Dancing by Diana Sperling, charming watercolors created during the Regency.

Haven’t looked for bug control methods. I know that picture of the girls swatting flies and assumed they did the same for all insects and bugs seen.
Somewhere I read that cinnamon or anything that interferes with the ants sense of smell is good.
Coincidentally, a young man at work has been keeping us informed all week about his battle with ants at his house– his parents being away.
He wiped away and sprayed as many ants as he could find . Having the advantage of the Internet, he researched the matter and came up with a source that recommended baby or body powder and spread that all over outside of windows and doors.
Your mistake was spreading peppermint inside instead of outside.
Thanks for the bit on extermination.
This account at least mentions the danger to humans . One source suggested using brimstone to clean white stockings. The stockings were on chair legs , (chairs turned upside down) the brimstone was set in the middle of the chairs and the whole covered with a blanket.
I can’t remember exactly what burning brimstone produces but do know that it is considered a hazardous substance today.

Fascinating. They made their own bug bombs. I’ve tried cayenne pepper. We always come back to diatomaceous earth, which doesn’t hurt people or pets.

And the exterminator is scheduled to come on Thursday.

I should have mentioned that all of these Regency era methods were poisonous to humans as well. Another reason why I’d rather live in the fantasy Regency than the real one.

I’ve heard about borac acid, but I can’t remember if it was around during the Regency. Lavender will keep scorpians and other spiders away.

Great post, Diane! I have no wisdom about fighting ants in the house. However, I used to have terrible trouble keeping ants out of the dog food in the dog dishes in my dog runs. It isn’t an issue now because I fond some dishes with a water reservoir around them. Apparently ants can’t swim!

Lavender! I’m sure that it was used in the Regency for repelling bugs. I remember reading that the scent of lavender would repel mosquitos, so this makes sense, Ella. As does the boric acid. That was one of the remedies I read about on the internet, but I didn’t have any on hand.

Louisa, I read about that water remedy, too. Apparently some ants have a sweet tooth and some love dog food. But none will cross water.

You could try Four Thieves vinegar, which was said to keep them from catching the plague while they robbed the houses of the dead and dying: