The Look Of Love – Redux 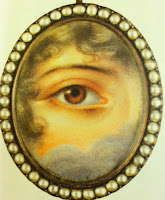 Last March I blogged about The Look of Love: Eye Miniatures from the Skier collection exhibit at the Birmingham Museum of Art. I had heard of the exhibition and its catalogue book from Jo Manning, author of My Lady Scandalous and several wonderful Regencies and frequent guest blogger at Number One London. I considered myself lucky to purchase the catalogue, because I didn’t have a prayer at getting to Birmingham to see the exhibit.

Then a couple of days ago I saw this at Number One London. The Look of Love exhibit was at the Georgia Museum of Art in Athens, GA. And guess what?? I was IN Georgia! The dh and I took a detour during our Georgia visit so I could see the exhibition.

Eye miniatures were a brief phenomenon during the late 1700s to early 1800s, started when the Prince Regent, then the Prince of Wales, commissioned eye portraits for him and Mrs. Fitzherbert, his secret, but not legal wife. It became the fashion for lovers to exchange portraits of only the eyes, so that they had a remembrance that no one else could identify. Because of this secrecy, whose eye is depicted on most of the pieces in the exhibit is unknown. In the exhibit catalogue, Jo Manning wrote brief vignettes of how certain eye portraits might have come to be. 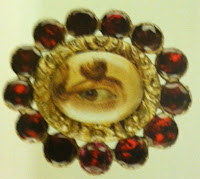 I’ve known about eye portraits for some time, but have only seen photos, never the real thing. The first thing that struck me was how tiny most of them were. The smallest ones were set in rings which were worn with the eye-side in, so the lover could gaze upon the image without anyone else seeing it. It is amazing that so many rings survived, because the miniatures were painted by watercolor on ivory and could be very easily damaged. The images were so tiny that the artist must have used brushes with only one hair. And yet the images are amazingly detailed and distinctive.

In addition to rings the miniatures were made into brooches, often encircled with tiny pearls or gems. One was a tiny gold heart pendant. There was also a bracelet, stick pins, and even toothpick boxes. Some of the later items were meant to be mourning jewelry and some also contained locks of hair.

We could not take photos, so the images here are taken from the exhibit’s brochure.

The gift shop sold these button souvenirs of the exhibit. Comment on this blog today for a chance to win one of these little buttons!

A big thanks to Number One London for blogging about the exhibition and making it possible for me to see these wonderful treasures!

What a fun bit of serendipity! So glad it worked out for you!

Lordy, those are both creepy and fascinating! Perfect for Halloween.

I’ve been lucky enough to see a few of Candice Hern’s lover’s eyes in person. Her collection inspired me to start buying period lace pins, which can sometimes be found for less than $100 on ebay.

Oh, Isobel. Don’t get me started on collecting something other than books (and prints)!!!!

Susan, these were rather eerie, but beautiful. The eyes were so skillfully painted and were just lovely.

Judy, it just seemed meant-to-be! And I felt it was a once in a lifetime chance to see these!

What fascinating, beautiful pieces. The artists managed to get so much character into so little–a miniature of part of a face!

I do have the catalog and it is a lovely, lovely book. Fascinating subject and just a bit surreal. I am so glad you got to see the exhibit, Diane!

The eye portraits are really pretty, I’d never heard of them before. But how fun they look.

I love these eye portraits–mysterious and revealing at the same time. Thanks for sharing!