Happy Tuesday, everyone!  I am deep in finishing up a book due Oct. 31 (the first in my Elizabethan mystery series!  I’m soooo excited about it), but first a little Tuesday business.  The winner of Love and Louis XIV is…Elizabeth Mahon!  Check your email inbox for more info… 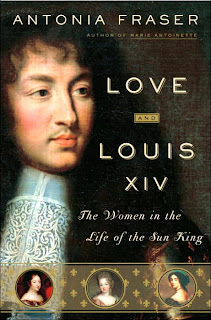 And in looking around for a blog topic today, I found out that Georgian actress Anne Oldfield died on this day in 1730.  I’m a huge theater buff, and love to collect books about the history of the theater/opera/ballet, so I sorted through my shelves until I found Joanne Lafler’s The Celebrated Mrs. Oldfield: The Life and Art of an Augustan Actress. 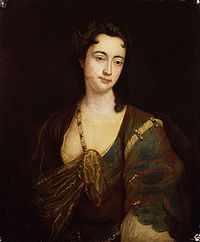 Anne Oldfield was born in London in 1683, the daughter of a poor soldier.  She was apprenticed to a seamstress, but she loved reciting poetry and plays, and one day was overheard (it was said in a tavern!) by theater impresario George Farquhar, who was impressed with her beauty and her speaking voice.  She then found herself engaged at Drury Theater and was an instant hit, at first for her looks more than any acting ability, but as the years passed she honed her craft and became renowned as a great comic actress.

Some of her most famous roles were in plays by Ben Jonson (Volpone and Epicoene) and Colley Cibber (The Careless Husband, The Provok’d Husband), who declared she “here she outdid her usual Outdoing.”

She was one of the great theatrical idols of her day, renowned for her talent and her ladylike behavior, her clothes and hats copied, her plays sold-out.  Alexander Pope, in Sober Advice from Horace, said,  “Engaging Oldfield, who, with grace and ease, Could join the arts to ruin and to please.”

She died at 47 at her fine house at 60 Grosvenor Street in London, leaving her rather large fortune to her two sons.  She was buried at Westminster Abbey.

Who would you love to go back in time and see onstage???

I would love to see some of those performances. What fun that would be!

I can’t believe I won! Thanks again Amanda.

I’d love to go back in time and be onstage! I’ve done a few Restoration and Georgian plays and they are fun. Although back then, actresses had to pay for everything, their costumes, and you depended on your benefit to make some real cash. You also had to tour a great deal and if you got pregnant! I’m pretty sure most actresses were onstage until they gave birth. Having said that, I would love to have seen Nell Gwynn on stage.

I want to see Shakespeare! Also Kemble, Kean, and Sarah Siddons. But if I had to choose one, it would be Shakespeare.

That’s a tough one, but I think I would like to see Kean as Hamlet. Although all of Cara’s and Elizabeth’s selections would be on my list as well!

What about Dora Jordan, the Duke of Clarnce’s mistress? (Claire Tomalin wrote a brilliant biography of her.) Though I wonder if we’d find it all a bit strange, since we’re so used to ‘naturalistic’ acting these days, don’t you think we’d find even the greats like Siddons and Kean very stilted? It would be fascinating to find out, mind you.