Tomorrow is Election Day here in the USA and when you live in a swing state (Virginia) in the suburbs of the nation’s capital (Washington, D.C.), You. Cannot. Escape. This. Fact. Ever.

If I lived in Regency England, though, things would be a lot different. An election would only be for members of the House of Commons. In the early 1800s, the House of Lords consisted of hereditary peers and, of course, the king was not elected. Members of Parliament served until Parliament was dissolved, every five years unless emergency extensions were necessary.

Fairness was a rare commodity in election to the House of Commons. Some “pocket boroughs” were in the pocket of the local magnate or his designee and, therefore, had no real opposition. Other “rotten boroughs” might have small enough numbers of voters that all could be successfully bribed, while areas as densely populated as Manchester had no representative. For example, Old Sarum in Wiltshire had three houses and seven voters. The Reform Act of 1832 dissolved the rotten boroughs and more evenly distributed representation. 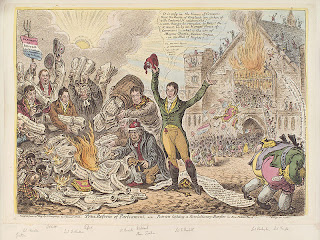 Like in the US, there were two main political parties. Generally speaking, the Tories were conservative, wanting to maintain the status quo, while the Whigs advocated electoral, parliamentary, and social reform. After the French Revolution, the Tory party experienced years of largely uncontested power. Before he became Prince Regent, George IV supported Whig sentiments, but when in power, he turned Tory.

The only people who could vote in Regency England were male landowners. Only one man in seven could vote in England; one in 44 in Scotland. Women did not earn full voting rights in the UK until 1928.

So when I cast my vote tomorrow, I’ll be grateful that I have a voice in my government and I’ll appreciate how different it would have been if I had lived in my beloved Regency England.

(P.S. I’ll be picking the winner of one download of Susanna’s An Infamous Marriage tonight, so you can still comment today. Susanna will be adding to her contest all Risky commenters who gave her an email address)

I’ve always bragged about being part of the ruling class because I vote. 🙂

People who don’t vote should not complain about the government for the next four years.

Having said that, I think the U.S. should adopt the British system of electioneering: three weeks of campaigning, then vote.