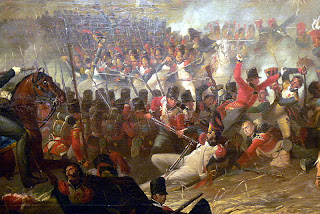 Yesterday was Veteran’s Day in the USA, a day we remember and honor the service of our military veterans. Both our Veteran’s Day and the UK’s Remembrance Day had their origins in Armistice Day, commemorating the armistice between the Allies of World War I and Germany for the cessation of hostilities to take at “the eleventh hour of the eleventh day of the eleventh month” of 1918.

After the Napoleonic Wars, though, a war that cost the lives of over five million people overall, no such honors were forthcoming. In fact, most officers and regular army returned to more struggles.

Officers who no longer had a regiment were placed on half-pay, which for some meant debt, eventual poverty, and the workhouse. Some tried to keep up the trappings of their rank only to fall deeper and deeper into debt. The Gentleman’s Magazine in November 1819 reported the death of one such officer. Lieutenant Henry Bowerman, late of the 56th Regiment of Foot, and his 11 and 12 year old sons, died in the Norwood workhouse.

Regular soldiers received no such half-pay, but some were eligible to be in-pensioners at the Royal Hospitals. The hospitals’ commissioners decided if a man was able to earn some sort of living and be sent as an out-pensioner. Sergeant Thomas Jackson, who lost a leg in the war, was deemed young and fit enough to work. His pension was one shilling a day.  He’d spent 12 years in the army.

Thousands of soldiers lined the streets with no occupation but drink. Few turned to begging, though, but professional beggars took their place by pretending to starving soldiers. Some fared adequately, marrying well or finding work. Benjamin Harris, whose memoirs about being in the Rifles certainly must have informed Bernard Cornwell’s Sharpe series, returned to being a shoemaker, but always considered his service in the war the only part of his life “worthy of remembrance.”

War memorials of the Napoleonic War soldier are nearly non-existent, existing mostly on graves or memorials to individual soldiers. A marble slab at one end of the nave in a parish church in Buckinghamshire, reads:

SACRED TO THE MEMORY OF
CHARLES EELES ESQ
Late Captain in his Majesty’s 95th Rifle Regiment,
who after serving with the British Army Thro’
the various campaigns in the Spanish Peninsula,
Terminated his Glorious Career
on the 18th of June 1815, in the 30th year of his age.
He fell nobly in his country’s cause on the ever
memorial field of Waterloo.
Esteemed,  Lamented, and Beloved.

Most Napoleonic soldiers WERE buried in fields near the battles in which they fought and died, their bodies plundered and left half-naked.

Perhaps we remember them, though, in our imaginations and our fascination with the Napoleonic War. We keep them alive in our books. Some we even reward with a happily ever after.

The information in this blog came from one of my favorite research books, Redcoat: The British Soldier in the Age of Horse and Musket by Richard Holmes. Holmes explains everything about what it was like to be a soldier in the “Age of Brown Bess.”

Do you have a favorite book or movie involving a soldier? For me it was definitely the Sharpe series, on audiobook as read by William Gaminara

I’ve mentioned, a while ago, I was not taught to honor those who serve in the military, even though my father and brother both did so. When I started digging for the truth about myself, I learned I had no clue about honor. I spent a month doing research. One of the books I read was Marcus Luttrell’s “The Lone Survivor.” Changed me forever.

I’m glad we’ve progressed beyond the Napoleonic era in caring for our military. But from much I see, we still have a long way to go.

I’m with you on the Sharpe series, of course!

I have to agree the Sharpe series is at the top of my list. The treatment of those who fought against Napoleon is absolutely shameful. We’ve come a long way, but this Air Force brat knows we still have a long way to go.

Elena, I agree. We have a long way to go. I just heard on the radio that Veterans who appeal a denial of benefits face a wait of over 600 days for their case to be heard. That’s two years!!

Louisa, how many of us learned to love the Napoleonic soldier through Sharpe?