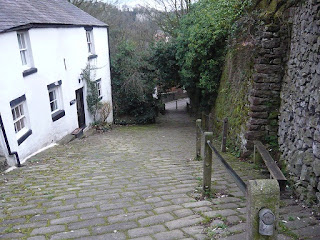 The country village of the Regency era was much more self-sufficient than it is today. Local farmers’ wifes produced butter and and eggs, which they would sell at the local market and most households would spin their own yard and knit stockings. A whole community would get together when it was time to kill a pig and everything would be done in one day, cutting up the meat, curing it and making the sausages etc. This was not the consumer society we know, but some things had to be brought in and fashion was beginning to make its mark.
For the Illegitimate Montague my heroine, Amber Hall is a clothier with a warehouse/shop in Castonbury and I have no doubt that she purchased at least some of her cloth from some of the many wholesale drapers in Manchester, which was only about 30 miles away. 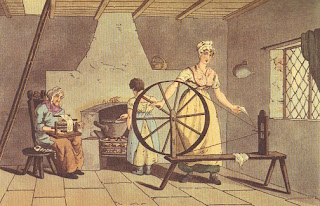 There were no dress shops as such in the Regency: those wanting new clothes would buy their cloth from a clothier, or if they lived in London they would have access to more specialised silk warehouses. The clothes would then have to be made, either by the women of the house, or those rich enough would employ a dressmaker or modiste. They would most likely copy one of the fashion plates from the Ladies Magazine, or La Belle Assemblée.
Country families who rarely came to London could appoint the proprietor of a London coaching inn to act as their agent for shopping and other business, and the goods they ordered would be sent back to them on the mail coach – the very first “mail order”! Many provincial shopkeepers would travel by mail coach to London to buy goods from the wholesalers. In the early 1780’s Elizabeth Towsey (who, with her sister Susannah kept a milliners in Chester) travelled to London twice a year to select from the new season’s fashions. When the goods arrived, she put an advertisement in the local paper, inviting customer to come and inspect them. (Susannah later married a druggist, Mr Brown, and their son carried on the millinery business, which became a famous department store, Brown’s, in Chester).
Some families did not have a London agent, but would rely upon the county carriers, whose waggons travelled from the larger towns to appointed London inns – this was slower than the mail coach, but considerably cheaper, too.
Now, all the above would apply to the wealthier families, but for most of the villagers, new clothes were a rare occurrence. I found some fascinating snippets of information about country life in a book written by Anne Hughes, a farmer’s wife who lived at the end of the 18th century (The Diary of a Farmer’s Wife, 1796-1797.)
Anne’s village was in Monmothshire, and probably a little more remote than Castonbury, but although she does a great deal of sewing and she talks of her mother-in-law knitting hose and her maid spinning yarn, the only mention of a new clothes is when her husband has been paid for his harvest and he buys her a new gown. Anne does not mention buying cloth or gowns for herself, although when she goes to market and sells her butter (for 7 pence a pound) she does buy a ribbon for her maid Sarah’s hair. 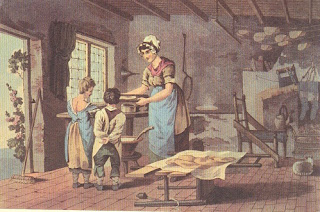 Clothes were passed down the social strata – the lord and lady of the manor passing on their unwanted garments to the villagers and farmers of the area – and no one is offended by this. When it is her husband John’s birthday, Anne says “…I did give him a pair of blue velvet britches, which my dear lady’s mother did give me in my parsell, and which pleased him mitilie, he liking the good small cloes to his leg covering.”
Anne also passed on some of her older clothes to her maid Sarah. When Anne and her husband are invited to the parsonage to drink tea, Sarah is invited too and doesn’t know what to wear …”so we up to my chamber where I did give her a purple velvitt out of my chest… It fitte her finely, so I did tell her to wear it with her warm cloke and nitted bonnitt.” In fact, it must have looked very good, because Sarah ended up marrying the parson!
When it is announced that Sarah is to be married, there is much talk of sewing sheets and linen for her chest, and Anne’s brother in law sends a package for Sarah, which contains “verrie fine linen for the making of sheets and damask for the tablecloths for her tables. And, as well, a verrie fine piece of white satin with a little blue flower upon it, and some fine lace for trimming.”
The satin was later used to make Sarah’s wedding gown “and it do look very nice, all trimmed with the fine lace and some at the sleeves and throat.”
However, before we think that village life in the Regency was a non-stop sunny idyll, there could be disagreements – Anne most definitely took against one Parson’s wife, a Mrs Ellis. She says that when they were walking to church together “Mistress Ellis…minsed along aside me prating of her new cloathes and that the gown she is waring cost so much, which I doe know is onlie her last yeres turned about and new bowes on for show. This I cappes by saying I will show her my new brockade which Jon bought me last market day….. After we had dined, I did take her to my sleepin chamber to showe off on her my best cloes; at seeing which, she begins to trump up about her new black sylk, which had cost so much and which I do know she did buy off Mary Ann, herself telling me so. Knowing this I could well afford to bring out my black sylk with the white spottes, what John did buy for me and which I had not put on. This did end her bounce so down again. It being two howers since she had fed, to tee drinken.”
And again, when Anne sees a “flighty piece in church” – “April ye 12 – We to church this evening….I did see Sarah Anne Plummer was there, tossing her head about, on which was a new bonnet, that I doubte be paid for: she being a shiftless body. I did also spot Mistress Jones….very high and mighty and aping the great lady, she wearing a verrie queer head covering, like a platter, albeit not so big, with great store of flowers upon it and ribbons adandering therefrom, in which she did look a sight to be sure. She did also wear a bright red gown of a cottony stuff, and not silk as I could see verrie well and she did throw off her cloak to show her finery, but la ’twas but trumperie stuff ….”
I do not know what Anne would have made of my heroine Amber’s warehouse – certainly Amber made sure her stock wasn’t “trumpery stuff” but I can imagine that the ladies of the village would have been vying with each other to look their best and more than one would have ribbons “a-dandering” from their bonnets!
Sarah Mallory
The Illegitimate Montague – #5 in the Castonbury Park Series 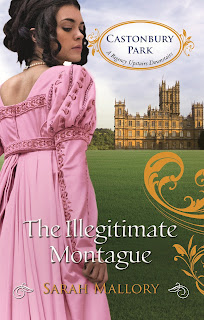 I’ve been longing to read The Diary of a Country Farmer’s Wife ever since I read a review of it somewhere–thanks for reminding me about it.

I’ve seen an ad. for a shop in Baltimore, MD in the period that advertised ready to wear clothes, but maybe that was only in America? I’d love to find out more. Since the fashions came direct from London I can’t help but think the ready to wear concept was something already familiar here.

And welcome to the Riskies

This is my first time hearing about this diary and I’m adding it to my list. I do love firsthand accounts.

Thanks for coming to the Riskies, Sarah!

I enjoyed your blog today and find the nuances of historical village life fascinating.

What an interesting post – I enjoyed learning more about the way clothing was acquired and thought Anne, the farmer’s wife was pretty funny in her comments about those that put on airs. 😀

Thanks for the informative post, Sarah! I’m definitely adding the diary to my list as well. And I am so enjoying the Castonbury series!

I live in a small village in England for three years as a child. It was in the late 60’s / early 70’s, but the village was still somewhat self-contained and I am so glad I got to experience it.

Great stuff, Sarah! Thanks for sharing it with us and for being our guest at Risky Regencies!

Lets try this again. The post was very interesting. Thank you for sharing.

Thanks for all the comments, everyone. I have been away for the weekend for a special family gathering – very village-like, too, Louisa! – so I am answering everything at once here. Janet – I have never seen an advertisement for ready to wear clothes here, but it is possible that some were available, but the concept of making over old gowns was the accepted practice – think how many costume books have gowns that have been re-worked and the original stitching lines are still evident. Of course, that was a lot easier when you had so much material in a gown – it wouldn’t work with a 1960’s miniskirt!

Thank you all for dropping by, it’s been great fun!

Fab post. It reminded me though, as one of 7 children, that we handed our clothes down and along quite a bit.

Thanks, Jayne and Marguerite. I was fortunate, Marguerite, I was youngest of four but the rest were boys, so very few hand-me-downs. However, I did grow up a tomboy, which explains why I like adventure in my romances!

Oh wow! I’ve just found a new, really cool blog! I know this will become a daily haunt for me.

Such interesting information and great pictures. Thanks so much for sharing. Love it!

Some things don’t change, Jo 🙂 And Connie, I agree. Risky Regencies is one of the best blogs around. I am honoured to be invited here.

I have a feeling Anne and I would get along quite well! She sounds like a tough and funny lady. I’m looking forward to “meeting” Amber in this new Castonbury book. 🙂