by Elena Greene
I was looking through a list of period dramas for DVDs to put on my holiday wish list and discovered that there is a film version of Georgette Heyer’s The Reluctant Widow. I wondered how I could have missed this, as I can’t remember discussing it here or with any other group of Regency fans.
Anyway, I did a little digging. The film came out in 1950 and starred Jean Kent and Guy Rolfe. Currently, it’s only available on Youtube although it appears to have been on sale at some point at www.lovingtheclassics.com. According to IMDB, it was renamed The Inheritance at some point.  The Georgette Heyer fan site (www.georgette-heyer.com) calls it a spoof, but after viewing the first ten minutes, I think it was an earnest attempt at making the story into a gothic romance. They’ve missed the humor in Elinor and Carlyon’s first meeting and it seems they were already deviating from the original plot.
Here is Part I. Watch it if you dare! And then someone please explain to me why Carlyon is wearing a military uniform.
One of the comments on this clip says that Georgette Heyer was so disappointed with this film that she made provisions never to have her books made into film again. However, back at www.georgette-heyer.com/movies.html it says that there are two production companies in the UK and the US that have the rights to her stories.
I found this in a 2009 post at http://www.wordcandy.net/3-25-2009-georgette-heyers-film-adaptations

“After some e-mail hunting, I received a response from the literary agent who handles Ms. Heyer’s work in the U.K. According to his letter, his agency has been trying to interest production companies in dramatizations of Heyer’s mysteries for a long time, with no success. He said production companies “mumble about the cost of period drama, and whether there is an audience for old-fashioned crime”! Thankfully, he assured me that they plan to persevere until someone sees the light….”

If you get a group of Heyer fans together then talk with inevitably turn to television and film adaptations or, more precisely, the lack of them. There is a film version of The Reluctant Widow, which came out in Heyer’s lifetime but apparently it appalled her so much that she refused to allow any more.

However, it now transpires that she badly wanted her books made into films and there’s even recently been a Cranford style version planned with three of her books given an intertwined storyline – I’m guessing it would be Regency Buck, Devil’s Cub and An Infamous Army maybe as they are already linked by common characters.

Intriguing, but why haven’t we heard more about this?
I also found a Dec 2011 campaign to encourage ITV or BBC to do this at heyercampaign.wordpress.com/. This site includes a poll as to which stories people would most like to see on film: 1st place—The Grand Sophy, 2nd place—Arabella, 3rd place—These Old Shades or Sylvester.
And there’s a more recent petition, begun in September of this year with 215 signatures so far at http://www.petitionbuzz.com/petitions/georgetteheyerfilm.
I haven’t had time to follow up any of these leads, but I’m tempted.  Much as I enjoy Jane Austen adaptations, there are so many good ones already! It would be so much fun to watch a sympathetic Heyer adaptation. I like the choices from the Heyer Campaign poll, but I’d also love to see Frederica, with its balloon ascension and the scene with the famous Baluchistan Hound.
So, am I the only one who didn’t know about the 1950 version of The Reluctant Widow?  Does anyone have any more recent news on Georgette Heyer films? Which book would you most like to see on film?
Elena
www.elenagreene.com
www.facebook.com/ElenaGreene
www.twitter.com/ElenaGreene7
P.S. www.georgette-heyer.com/movies.html also indicates that there was a German version of Arabella—however, they apparently made a few changes as this promo poster suggests! 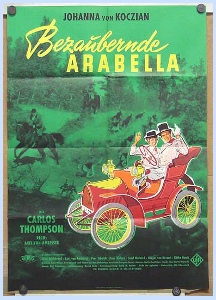 IIRC, Jane Aiken Hodge talks about the Reluctant Widow movie in her Heyer bio, and the impression I got from that was that it was dreadful…though I’ve always been curious!

If someone ever did good adaptations, I’d be happy….but I guess I’d rather have none than bad ones. Especially as bad adaptations can turn off many potential readers (who dislike the movie, and so never read the books….)

The Cranford-style idea is really intriguing….though surely they mean “These Old Shades” rather than “Regency Buck”? It would end up more like one of those saga things that were popular back in the 70s, rather than a Downton thing. (Or you could just take several of her novels, and find some similar characters, fuse them, and make it a Downtonish thing…that would be a fun writing challenge.)

As for what would adapt best, they could go plot-heavy and adventurey with These Old Shades; plot-heavy and comic with The Adventurers or The Unknown Ajax; or more for straight romance with Venetia. Or romantic comedy with Sophy or Frederica!

Okay, I watched that clip from The Reluctant Widow — not bad! Now I really want to see it.

BTW, the thing that struck me most about it is that there’s not a glass coach in sight! The first carriage is a proper chariot, and the second a coach (or landau? hard to tell.) 🙂

I’d never really thought of this before, but I would love a really good film version of any of Heyer’s work. That said, I agree with Cara that a bad adaptation would do more harm than good.

Cara, I originally thought the same thing about the series, but then I remembered that the hero in An Infamous Army is the younger brother of the hero of Regency Buck.

I agree, a bad adaptation would be a problem. But surely the talent is out there to do it well.

Cara, if you watch the rest, let us know what you think. I don’t have time to watch, now that I’m over my cold, but maybe the next time I’m sick.

but then I remembered that the hero in An Infamous Army is the younger brother of the hero of Regency Buck.

I can’t believe I missed that! It’s been years since I read either book, but still….wow.

Now I need to reread them!

I’d love to see ‘Behold here’s poison’ or ‘No wind of blame’made into a film – Why aren’t there any film versions of her books? We see so many adaptations of Agatha Christie novels – which I love, but I would equally love to see some of Georgette Heyer’s too!

Holly, I’ve read some contradictory things. One version I’ve heard is that Georgette Heyer tied up the rights so her books could never be made into film. Another is that there has been an effort to do so but hasn’t happened yet. If you follow some of the links in the post you’ll see what I found.