One of my Regency hobby-horses is the use of titles.  I’m afraid it makes me crazy if an author spends the time to write a novel set in our era and neglects the proper titles for her aristocratic characters.  Indeed, an author who’s writing I love has been known to make me wild by getting titles wrong book after book.  Come on, honey.  You should have figured this out by now.
I have had this rant before on other sites, so I will not take too much space with the ranting and, rather, devote this post with some advice about how to get it right.  It’s not that difficult.

Now, on to that right way.
A duke is “your grace” or “his grace.”  The same goes for his duchess.  His title is “Duke of Title.” For example, Peregrine Cavendish is the Duke of Devonshire.  He is never Lord Devonshire or Lord Cavendish.  His peers may call him Duke rather than Your Grace.
An earl is Lord Title, never Lord Surname or Lord Given Name.  For example, John Montague is the Earl of Sandwich and is addressed at Lord Sandwich..  Friends might refer to him as Sandwich.  His wife is the Countess of Sandwich and is called Lady Sandwich.  In a few cases, such as Earl Spencer, the title and surname are identical.
A Viscount is also Lord Title.  Edward Pellew is Viscount Exmouth and would be addressed as Lord Exmouth.  His wife is Lady Exmouth. 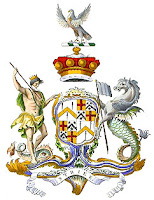 Barons are also referred to as Lord Title.  Barons, more frequently than other titles, may have titles that are the same as their surname.  For example, William Hawke is Baron Hawke and is called Lord Hawke. His wife is Lady Hawke (and may or may not be played by Michelle Pfeiffer). This is not always the case, however, and you should be sure that, whichever you choose, your title remains consistent.

So these are the basics.  It goes on from there.  Oldest sons of dukes, marquesses and earls usually take one of their father’s lesser titles as a courtesy title (if one is available) and would, thus, be Marquess, Earl, or Viscount of Whatever.
Younger sons of dukes and marquesses have the courtesy title of Lord, but they use their first names.  Lord Peter Wimsey is Lord Peter, never Lord Wimsey or Lord Denver (his older brother is the Duke of Denver).  And, moreover, his wife would be Lady Peter.  Cool, huh?
Younger sons of earls, viscounts, and barons are just “honorable” and are usually addressed as “Mr.”
Daughters of peers are Lady Given Name regardless of their birth order.  In Pride and Prejudice, Lady Anne Darcy and Lady Catherine deBourgh are the daughters of an Earl (which one, we’ll never know).  This applies to daughters of dukes, marquesses, and earls.  It does not, however, apply to the daughters of viscounts and barons.  Like the sons, they are just honorables and addressed as “Miss.”
Have written these down, I realize they don’t look as easy as I may have lead you to believe.  However, I have a couple of web sites for you that will make it much easier.
Laura Wallace created and maintains the fantastically useful British Titles of Nobilitywhich takes on all this stuff and more in an easy-to-understand layout.  If you bookmark this site, you need never wonder if you’re using the right title.  For something not as detailed or exhaustive (just the basics, ma’am), I give you the table of honorifics from the Jane Austen Information Page at The Republic of Pemberley.
So, there it is.  Yes, it’s a little convoluted but if you love your subject and your era, and you’re going to write about it, it’s not too much to ask that you get the details that are easily available to you. Right?  If you don’t know it, look it up.  Or ask a friend who does.
Here’s the final question.  Am I alone in being driven wild by misuse of titles?  Does this make you tear your hair out or are you able to overlook it and get on with the story?

I totally agree with you that titles must be correct – it’s research just like all the other stuff and must be accurate for the era. Thank you for the websites and the examples. In the throes of writing a scene that suddenly sweeps me along, I sometimes need to check and recheck on such details.

Ugh, I totally agree with you!! I just bought my future MIL a non-fiction history book about an American woman who married a British earl–an entertaining book, but the very title of it calls her “Lady Firstname”. I almost took it back 🙂

Other than reading a lot of regency romances, I’m no expert in titles. It does bug me when it’s really blatant. If even I catch it, it’s pretty bad 😉

What bugs me much, much more is when an author messes up simple succession issues. I read a fairly old Regency (can’t remember title or author) and the children of some Lord something were being neglected by their uncle who had inherited from their father. Except that there was a brother who had somehow NOT inherited.

Not as much as indiscriminate first name use!

I admit to stretching the limits regarding use of first names (Don’t hit me, Janet!!!!) but most often I try to find a surname or title name that lends itself to a normal sounding first name (If that makes any sense). But for modern readers, I think sometimes it makes sense to revert to first names in some cases.

Because I write for the UK branch of Harlequin, I consider it essential to get titles correct and I cannot understand why any writer would get it wrong when it is so easy to check the right way.

I can get past title errors, especially if they’re not keeping company with other inaccuracies–like foxhunting in the summer or courtesans invited to ton parties. But the basics aren’t that hard, so I’m not sure why some authors don’t bother.

It’s such an easy thing to get right that if the author gets it wrong I lose faith in her ability to get anything right. The barest minimum of reading about or in the period will result on one’s knowing instinctively how it all works, but in any case there are such good, easy to find guides that it’s unforgivable to get it wrong. It’s hardly obscure!

Although I’m by no means an expert, I know enough to notice when an author gets it wrong. I read a book recently that featured a duke, and I was going a bit crazy with all of the inaccurate ways the author referred to him, although I liked the story.

I agree, Phyllis. Errors in succession are equally enraging. And, Janet, I’m not quite as bothered by use of first name as you are. Naturally, I prefer name usage to be accurate to the period, but I also want it to read smoothly for a modern reader.

Barbara E, I suspect you and I might have read the same story or, sadly, stories by the same author. The hero kept strangely morphing from Duke of Title to Lord Title to Lord Surname and back again. It was confusing and infuriating and yet the author is other wise very engaging.

Myretta, you hit the nail on the head for me! I hate it when authors get titles wrong, it takes me right out of the book. I also hate it when authors use real Dukedoms for their heroes, even though that’s a simple thing to check as well. Certain dukedoms are famous, Richmond, Westminster, Devonshire, Grafton. There is no excuse whatsoever for making a hero the Duke of Devonshire, unless you are writing about the real dude.