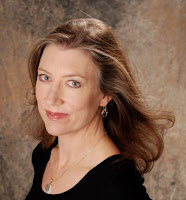 Be afraid … be very afraid. Christmas is coming but Kate Dolan is here to guide us through this darkest part of the year. Kate is a prolific writer of many hats, and today’s hat is that of the writer of not quite politically correct Regencies for Cotillion Press. And she’s giving away a free download of each of her holiday releases, The Bride of Belznickel and Change of Address. Take it away, Kate…

Back before we had the option of watching “Elf’ or “A Christmas Story” every night for a month before Christmas, we humans satisfied our need for entertainment by sharing Christmas stories around the fire. There is an ancient tradition of telling “winter tales” that included fantastic or paranormal elements inspired by our fears of the dark. Some say this practice died out during the medieval era and others say it continued unabated, but there is no doubt that the tradition of telling scary tales was being revived by the later Regency period. 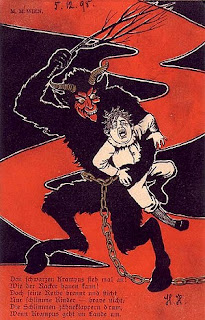 With whips and chains.

That could make for a very scary Christmas if you’ve been bad.

The Belznickel was generally depicted as dark, with the figure of a man but the horns of a goat. He carried a whip to chastise, and chains to confine or remove miscreants.

Some believe stories of the Belznickel derive from the vindictive Germanic god Woden, whose name in older dialects was Pelzmartel. According to legend, Pelzmartel and his wife would come to earth each year from December 25 to January 6 and they were welcomed with bonfires. In mumming tradition, the evil Belzickel figure is always portrayed by a man while his companion, the good and generous Christkindl, is always potrayed by a woman despite the fact that the name translates to Christ child and should therefore be male. This suggests that the “Christkindl” character is just a Christianized version of Woden’s wife, who was said to be as good and kind as Woden was nasty.

Others trace the Belznickel tradition to the popular stories of St. Nicholas, a bishop who lived in around the year 300 in an area now part of modern Turkey. Nicholas supposedly put money in a girl’s shoes one night to keep her from falling into prostitution. From that came the custom of putting gifts in stockings or on the floor. In some places, it was expected not only for  the Belznickel to threaten punishment but also to scatter candy and treats on the floor to reward well behaved children. If they reached down to pick up the goodies while he was still there, they risked getting hit with a whip or switch.

Stories of a mischievous or macabre “helper” for St. Nicholas vary according to different cultures. In Switzerland, for example, the helper “Schmultzli” was said to threaten to put bad children in a sack and take them to the Dark Forest. There are even tales of him drowning particularly naughty offenders.

The Belznickel tradition took on a new twist in 19th Century America. A Pottstown Pennsylvania newspaper article from 1826 calls him a Christmas “marauder”  who created havoc every night leaving the streets strewn with lumber debris. The newspaper describes the Belnickel as short and “chunky” with a long beard and clothed in a black bearskin cap, red plush breeches and moccasins “the same worn by the Chippawa Nation.”

Often those dressing as Belznickel blacked their faces, and that became such a part of the tradition in the U.S. that by 1905, at least one journalist speculated that the entire Belznickel legend originated with African-American slaves performing at Christmas.

The black face disguise goes along with another part of the Belznickel tradition that seems to fit Halloween better than Christmas. Troupes of men would go from house to house in costume, play up the part of the Christmas demon, and then be treated to drinks and food.  This is called “Belznickeling.” Even as recently as 30 years ago, a group of these revelers scared the heck out of one college student returning home for a visit with her parents. After the rest of the family had gone to bed, she heard noise outside and looked out the window to see the house surrounded by men wearing masks. She woke her parents and begged them not to open the door, but they did anyway and the men pushed their way inside and staggered into the kitchen, demanding drinks. Her parents tried to explain that this was an old European tradition.

In my experience, I would expect the college students to be the ones dressing in costumes, stumbling around in search of alcohol. Maybe the tradition of Belznickeling is still practiced more widely than we realize.

I found the Belznickel character so interesting that I used him for the basis of my traditional Regency Christmas story Bride of Belznickel, which has just been re-released as a standalone story by Ellora’s Cave Cotillion. In my tale, the heroine Hannah is forced to spend Christmas with cousins who ridicule her at every turn. To get even, she tries to scare them with tales of a Christmas demon. But then her stories start to come to life, and no one knows what to do about it, Hannah least of all.

Kate’s also giving away a copy of Change of Address. Amanda, her young sister and her unconventional mother move to a small house in a remote village just before Christmas—and discover it lacks furniture and everything else they need. Charles, son of the local squire, bursts in to rescue them when he mistakes smoke from the clogged chimneys as a house fire. When she realizes his father is their landlord, Amanda drafts Charles into helping them, and he willingly complies with the requests of the beauty. As the acquaintance between the families deepens, Amanda comes to realize that Charles may not be quite as bacon-brained as she assumed. When he rescues her from a drunken man, she then has to conspire with him to prevent worse consequences—all on Christmas Eve.

So … let’s talk about Christmas traditions. Does your family have a tradition of, uh, unusual folklore with or without whips and chains, or featuring scary stories?
a Rafflecopter giveaway

Very cool! A friend of mine who grew up in Germany says she remembers traditions like this fondly. I guess the kids were all in the know and treated it as we do Halloween. The story sounds like good fun.

My family is scary enough without crazy traditions. No, I take that back. We have one weird Lithuanian tradition. We make honey spice cookies in the shape of mushrooms. Yes, mushrooms. Some are frosted with chocolate to look like a prized type of edible mushroom and some are frosted red with white dots to look like toadstools, pretty but poisonous. I have no idea why we do this.

Elena, maybe the toadstool cookies are supposed to be poisonous and they’re for the bad children?

Hi Kate, great to see you here. I know that traditionally in English lore Christmas is a spooky time when ghosts often appear and I wonder why and how this myth evolved.

I’ve always loved the dark tradition of Charles Dicken’s, A Christmas Carol, speaking of ghosts and a bit of spooky Christmas tidings. Traditionally it is one of our family kick-off’s to the season (A Muppet Christmas Carol) and my 1970’s version of the musical Scrooged with Albert Finney and Sir Alec Guiness. Great post!

I read somewhere that ghosts are said to appear at Christmas for the same reason they’re supposed to appear at Halloween – the distance between this world and the next is at its shortest, maybe because of the long nights. Long nights certainly set the mood for scary stories!

“Bride of Belnickel” was not available yet on Amazon when I sent in my post, but it’s up now although it is listed as the second in a series, which it isn’t, and something having to do with fallen gods, which it doesn’t. But maybe that will sell better with mythology fans…

Welcome, Kate! I love the premises of both these stories!

And I love your description of Amazon woes.

All I can think is how scary it must have been to be a child in earlier times, to be in fear of being chained and put in a bag and whipped! Poor things!!

Very interesting, Kate. I had not heard of Belznickel.

Sometimes, though, I think the lack of those fears today could be the cause of some behavior problems in schools…

I first heard of Belznickel during Christmas festivities at Riversdale, the historic site where Janet is a docent. So I owe a debt of gratitude to whoever did the planning for the event, probably Ann Wass.

I’ve never heard of Belznickel either. Guess he’s been hiding under the bed!

Hi Janet and Kate!
Great post. I have never heard of the story of Belznickel. I grew up with the stories of a jolly fat man in a red suit, and I have to say, I prefer those stories. Growing on a border town of Mexico,my friends tried to scare me with stories of La Llorona, the crying beautiful woman who walked the streets late at night screaming for her lost children. [She killed them]. During Christmas vacation, we would seek out of our beds and try to find her. Of course, we never left our yards… too dark… too scary.LOL Give me a fat man and his red nose reindeer anyday.

I that is Krampus in the picture, not Belsnickel. It’s Krampusnacht today in fact.

I think the two characters are probably the same, actually, based on what I’ve read about them. But I heard about Belznickel first so I’m sticking with that name. And yes, St. Nicholas Day is today, so this is the time these bad guys would often make their visits! Watch out, everyone…

Nancy, was La Llorona especially active during the Christmas season or did she cry out for her children all year?

No dark and scary traditions in our family. Christmas has always been a time of happiness. Our son has gotten lumps of coal in his stocking over the years. Now he appreciates it, he is a blacksmith.

I have never heard of frightening Christmas traditions. They seem so out of step with the “spirit” of the season.
I’ll stick with the comfort and joy themes.

Hope you have a great Christmas with or without Belnickel.