Susanna here, rejoicing that it’s Friday at last. I’m hard-pressed to think when I’ve been more eager to see a week come to its end.

I’m currently reading Consider the Fork: A History of How We Cook and Eat, by Bee Wilson. It’s a fascinating look at the history not of food, but of the implements we use to cook and eat it. I’m only about a third of the way through, but I’ve already learned so much. For example, 19th century vegetables weren’t anywhere near as overcooked as you’d expect based on the long cooking times advised in early cookbooks, because cooks were advised to simmer vegetables rather than cook them at a fast boil, and also because they’d pack a lot of vegetables into a small saucepan rather than a smaller amount in a larger pot like we do today. 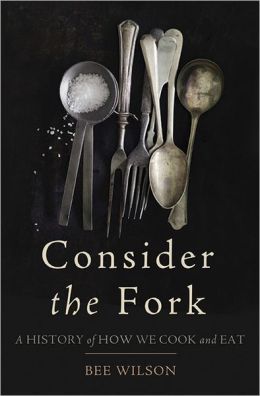 And here’s another fact that surprised me tremendously: You know how most people have a natural overbite, and if you don’t, your orthodontist will work to give you one? Apparently that’s a recent development in human history, and isn’t the result of a genetic change–it’s developmental, based on how we eat. When you look at older skeletons, you generally see incisors that meet edge-to-edge. The overbite starts to emerge 200-250 years ago in Europe, but 800 to 1000 years earlier in China. In both cases, the change happened first among the upper classes.

The probable explanation? Forks and chopsticks. Once people started carrying food to their mouths already bite-sized rather than tearing it apart with their teeth, their incisors started to grow in differently.

I’ve long been fascinated by culinary history, and I’m starting to incorporate it in my writing. In my July release, A Dream Defiant, my heroine is a naturally gifted cook. She’s a commoner, an ordinary English village girl following the drum in Spain with her soldier husband, and her dream for after the war ends is to take over the inn in her home village, which has a reputation for dreadful food, and turn it into a place all the travelers on the Great North Road will stop to linger over their dinners. And I have an unfinished manuscript I’m thinking of dusting off where one of the characters is a French chef I created to contrast with every fussy, melodramatic French chef ever written. The manuscript in question is a paranormal, so if you picture Anthony Bourdain, Vampire Hunter, armed with garlic and cleaver, you wouldn’t be far off.

What delicious things are you hoping to taste this weekend? I’m planning to bake cookies for the first time in ages.

Your upcoming release sounds intriguing–I like the variety of having characters not of the aristocracy–but Anthony Bourdain, Vampire Hunter??? This you must write.

This weekend is so over-scheduled there will be little cooking. But I have some leftover mulligatawny with lentils which will help tide us through. Mmmmm…. Have fun baking those cookies!

Yeah, I’m becoming more and more convinced I need to go back to that story. The plot as I originally imagined it had some problems, which is why I set it aside, but I think I have enough distance now from my first idea to fix it.

Fascinating. Mmmm… cookies… I hadn’t planned on cooking, but I may do so now. I find it a great way to inspire writing.

To me it’s something of a brain refresher because it’s such a different form of creativity than writing.

That is soooo interesting! Must find that book (and you need to write Anthony Bourdain Vampire Hunter NOW)

Well, I’ve got a couple of other commitments I’m sure my editor would rather see me address first, but it’s getting closer to the front of my mental queue…

Definitely fascinating–I always like books that make me take a second look at aspects of life I take for granted–like forks.