Today is Memorial Day in the USA, a day of remembrance that began as Decoration Day, a day freemen (freed slaves) decorated the graves of Union soldiers. The holiday eventually became a day to include remembrance of all who have died in defense of our country.

Most of us do not know first hand what soldiers face when they are sent into combat. We suppose their valor, their fear, their willingness to face enemy fire. We imagine it and recreate it in books (Most of my heroes are soldiers or former soldiers) and movies. 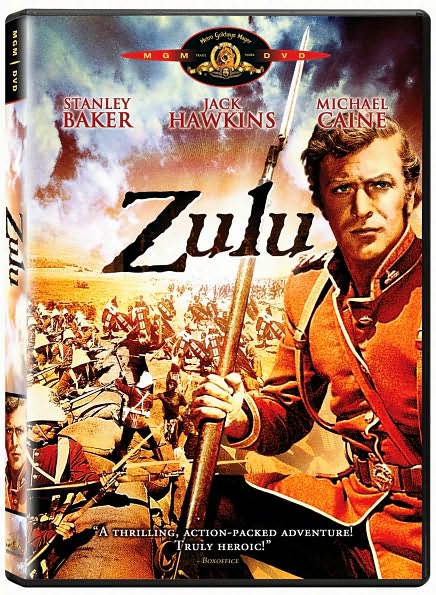 One of my favorite war movies is one released in 1964, Zulu. Zulu tells the true story of the Battle of Rorke’s Drift on January 22, 1879.

The British had invaded the Zulu lands in South Africa under the direction of the British Governor General, but without the sanction of the Government, as part of an attempt to unify the area under British rule. On January 22, at Isandhlwana, a British force of 1700 men was attacked by the Zulu and defeated, leaving only 400 survivors. One Zulu reserve corps of 3,000 missed the battle, but wanted to partake in the glory of victory. They attacked a British store depot and hospital at Rorke’s Drift.

There was only a tiny British garrison of 140 men at Rorke’s Drift. Many of them were sick or wounded. They were commanded by Lieutenant John Chard of the Royal Engineers, who outranked the one infantry officer present, Lieutenant Gonville Bromhead (played n the movie by a very young Michael Caine), whose company had been assigned to guard the station.

The 140 men at the station fought for 12 hours to repel repeated attacks by the 3,000 Zulu warriors. Queen Victoria’s government rewarded their heroic defense by awarding 11 Victoria Crosses and 5 Distinguished Conduct Medals.

What I loved about this movie was its depiction of the valor and dignity of both the British soldiers and the Zulu warriors. I loved that bravery and sacrifice was celebrated.

It turns out that my favorite two scenes in the movie didn’t really happen, but they still depict soldiers at their best.  Here is a YouTube video of those two scenes.

And here is to the valor of soldiers. We remember them today.

Come visit the Pink Heart Society today for my blog on Male on Monday. I’m giving away a signed copy of A Reputation for Notoriety.

My winner for last week’s giveaway of A Reputation for Notoriety is….bn100. Congratulations, bn100. Email me at diane@dianegaston.com with your mailing address.

I haven’t seen this movie in ages! I need to find it on DVD. It was one of my favorites when I was in college. I interviewed my father about his service in the Army during the Korean War for a high school history project. It was the one and only time he ever talked about what it was like on the battlefield. Even over thirty years later he was haunted by it and completely mystified by the awards for valor under fire he received. He always said “You don’t reward a man for doing his job.” I think his experience in Korea was the reason he got out of the Army after six years and spent the next twenty-five in the Air Force.