Like other Riskies, I’m recently returned from the RWA conference. I stayed a few days extra for a family reunion, so I haven’t had much time yet to digest what I learned. The second leg of the trip turned unexpectedly adventurous, too–on Sunday while on the way to the Six Flags amusement park with some of the family, including my 9-year-old daughter and 10-year-old grand-niece, we had an abrupt flat tire in our rental car. While on I-20. Fortunately we were able to make it over to the shoulder safely, and we had enough fuel in the car to keep the AC running while we waited for AAA to come to the rescue. And that rescue was worth every penny of AAA membership fees we’ve paid for the last DECADE, as far as I’m concerned.

Once we finally got to Six Flags, we only had two hours or so to enjoy the rides before this happened: 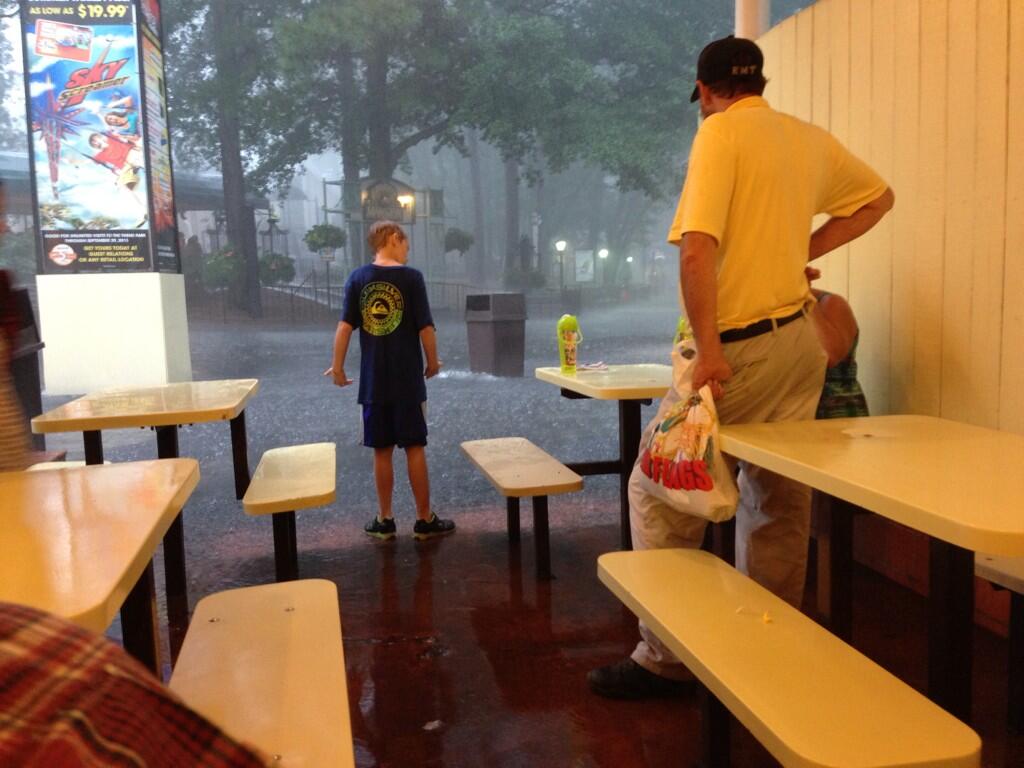 We knew it was going to storm, just not quite so…vehemently. That trash can with what looks like waves breaking against it had already drifted five or six feet from its original spot, and within a minute floated out of sight entirely. Once the rain let up even a tiny bit, we sloshed back to our car and drove to my nephew’s house through an hour of rain that alternated between driving and merely heavy. Not the best amusement park excursion ever, but at least the barbecue we stopped for during a heavy rain phase was delicious.

Then when we finally got back to Seattle on Tuesday and started up my car, which we’d left parked at the airport, to our dismay its low tire pressure indicator came on! Since we could see one of the front tires was visibly flatter than its mate, rather than risk a repeat of Sunday’s experience, only on I-5 during rush hour, we located the nearest tire center, five minutes’ drive from the airport, and went straight there. Which was smart, as it turned out. There was a tack in the tire, and a good chance it would’ve gone entirely flat before we could’ve made it home and taken it to the dealership for a check the next day. So, props to Les Schwab Tire Center for patching the tire for free and to Google Maps for finding the closest one. I love my 21st century technology! But I also love writing about the lower-tech world of 200 years ago. My latest release, A Dream Defiant, hits virtual shelves this coming Monday.

It’s a risky book on several levels. It’s my first-ever novella, so the shorter length was a learning curve for me–less than 30,000 words while my previous books have averaged around 90,000. So I had to ruthlessly cut the plot down to cover a shorter time range and resist the urge to go haring off chasing subplots or elaborating upon backstory. And I ended up enjoying it. While I don’t plan to give up full-length novels by any means, I have at least one more novella in the pipeline, a holiday romance whose title and release date remain TBD, but will be coming from Carina in late 2014.

But the biggest risk I took was writing a black hero. I was inspired by everything from a brief reference to Sudanese soldiers in Napoleon’s army in John Elting’s encyclopedic history Swords Around a Throne to the black soldier visible in the 1822 painting Chelsea Pensioners Reading the Waterloo Dispatch to Ta-Nehisi Coates’ blog posts about black soldiers in the Civil War.

Still, I hesitated for a long time before starting this story. Who did I think I was to create such a hero, when I’m not just a white woman but one with Southern roots and a Confederate soldier for a great-great-grandfather? And maybe I took too great a risk–though now it’s in the hands of you, the readers, to judge. But I ended up deciding it was an important, little-known aspect of history that was well worth exploring–and also that who my great-great-grandfather was shouldn’t determine what I can and can’t write about 150 years later.

I’m giving away a copy of A Dream Defiant in the electronic format of your choice to one randomly selected commenter between now and Sunday at 9 PM Pacific Time. So tell me about your own travel adventures, wonderful or otherwise, or let me know what risks you think Regency authors should and shouldn’t take.

I don’t know. I somehow think it is only fitting you, as a Southern woman with a Confederate soldier as a great great grandfather, are the perfect person to write this story. The relationship between black and white people in the South is not a simple matter of, well no pun intended, black and white. It’s complicated. Messy. Ugly. But also at times touching and one of deep understanding. I often think we actually had an easier time at integration, believe it or not, because we lived so closely together and because we saw things in much clearer terms than people in other parts of the country. I think your novella is an idea whose time has come.

Despite having lived my adult life in the North (in Philadelphia and then in Seattle), I honestly don’t feel that qualified to compare the regions on race relations, mainly because the only South I know intimately is the small town and rural one. Philadelphia and Seattle are different worlds for reasons that have nothing to do with region.

I’m excited to see this release and have already preordered it.

Re: race etc. Let’s face it. There are many, many works of fiction written by authors with no personal experience and yet they still write meaningful works. You are an early 21 st c woman writing of the common soldier’s experience in then peninsular war. The problem that we have in the US is that race is a particularly charged issue and there are deep animosities and deliberate misunderstandings from both sides. This makes it daring to be an outsider writing about the minority experience. I commend you for sharing a side of the war that has been little recognized. ‘Course I tend to be pragmatic and interested in the little peoples’ experiences most. My current read is American Civil War letters written by a female soldier. Maybe your next work could be of a woman hiding in the ranks… It happened.

Thanks for preordering, Dee! I hope you enjoy it.

One of these days I definitely mean to write a woman disguised as a man to join the army or navy. It’s showed up in some of my unfinished manuscripts, a few of which I’d like to go back to someday.