I’m in the middle of 1) finishing a novella by Friday, and 2) packing my 1000s of books for a move (ugh!).  But I’m also over at the Pink Heart Society blog today for a Pets And Their Authors post, talking about my bossy Poodle Abigail!  In honor of that, and to save my sanity, I am reposting a blog from August 2009 about some famous dogs in history.  My question still stands–how do I get rid of Pug hair???

I wasn’t really sure what to blog about today! I’m still working on the same projects I was last week (“Irish book 2,” etc), I couldn’t find anything interesting that happened on this date in history (though I’m sure there must be something somewhere!), and the heat and humidity of August has me stupefied and seeking the arctic AC of movie theaters and shopping malls (tax-free weekend on clothes last week, woo-hoo!). Then I found some interesting websites on famous dogs in history, and since I love dogs I decided to talk about that! 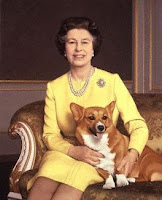 Mary Queen of Scots was well-known for her love of animals, bringing several small dogs with her from France when she returned to Scotland as a young widow. She had greyhounds and spaniels, as well as cages of songbirds. Her most famous pet was a Skye terrier named Geddon, who was devoted to her in her last years and accompanied her to her execution. Her cousin Elizabeth I was also fond of spaniels (her father, Henry VIII, had tried to cut down on the stench of his palaces by banning all dogs indoors except for ladies’ lap dogs–and monkeys). Elizabeth II, of course, is well-known for her love of Corgis. (A friend of mine has one–they are adorable, but they shed like crazy! I always wonder if the queen has someone following the dogs around Windsor with a ShopVac…) 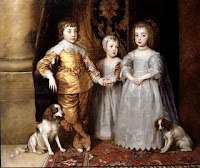 Charles II loved his little spaniels so much that they are now named for him–Cavalier King Charles Spaniels. (He even passed a law saying these little dogs could go into any public place, even Parliament! I’d love to see if that is still in effect).

In later years, the Duke and Duchess of Windsor were well-known for their troop of Pugs (11 altogether, including Dizzy/Disraeli, Davy Crockett, Trooper, Winston, etc) who traveled with them equipped with their own jeweled collars and silver, monogrammed water bowls. 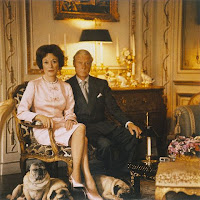 (Pugs have always had their champions! Prince William of Orange was said to have been saved by his Pug Pompey when the dog barked in the night to warn him of the approach of the Spanish in 1571. His descendents William and Mary brought Pugs with them to England when they assumed the throne in 1688. And an aunt of Catherine the Great, Princess Hedvig Sophia of Sweden, had 16. I cannot imagine the amount of Pug hair there must have been in her palace)

No other British monarch was as well-known for their affinity to dogs than Queen Victoria. Starting when she was a princess and she acquired her first dog, a spaniel named Dash (a gift from her bete noir Sir John Conroy–the puppy didn’t improve her opinion of him, but she adored Dash, and was heartbroken when he died in 1840), she always had a troop of dogs following behind her. She owned about 15 different breeds–mastiffs, border collies, greyhounds, Pugs (Bosco was her favorite Pug), greyhounds, Japanese chins, Skye terriers named Islay and Cairnach, a Scottie named Laddie, etc. Her favorite dogs were Pomeranians. Poms were actually introduced to England by Queen Charlotte, who brought them with her on her marriage in 1761.

Queen Victoria bought her first Pom on a trip to Italy in 1888, a red-sable named Marco (who later won Cruft’s). Her last Pom was Turi, who comforted her on her deathbed. 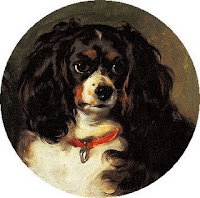 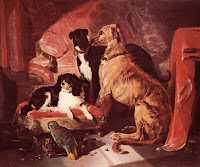 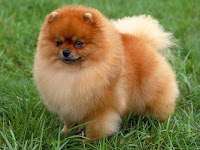 Poms were also beloved by many other figures in history. Michelangelo had one (who watched him paint the Sistine Chapel from the comfort of its silk cushion!), Isaac Newton, Mozart (whose dog was named Pimperl), and Chopin (who did not have one of his own, but loved a friend’s dog so much he wrote “Valse des Petits Chiens” for it).

And Marie Antoinette always had a coterie of little dogs trailing around Versailles behind her, including the Poms! She also adored Poodles, Papillons (including one named Thisbe), and Pugs (such as the famous Mops, an Austrian Pug who was taken away from her on her entry to France–but later returned).

Madame de Pompadour preferred the elegant and tres French Papillon, and had two named Ines and Mimi who went with her everywhere.

(I adore this breed, and if I had room in my house for one more dog–which I definitely don’t!–I’d have this one).

As it is, I have a Poodle (who doesn’t shed at all, but who is very bossy and opinionated), and a Pug (who is laid-back and agreeable, but sheds like crazy and eats a lot). I’d love to have footmen and parlor maids to clean up after them and their cat siblings, as Queen Victoria and Marie Antoinette must have!

What are your favorite dogs, either in history or in your own house? And do you have any tips for getting Pug hair off the sofa???

Well, I have a Mastiff (who I guess is basically a giant pug) and he sheds like MAD! Nothing–I repeat NOTHING–gets his hair off the sofa. I’ve given up. It’s the most expensive dog bed I’ll ever buy.

Prinny was also known for his dogs. He had Spitz/Pomeranians (Fino and Tiny) that were painted by Stubbs (his mother had them as well, painted by Gainsborough, who of course had his own who was featured in many of Gainsborough’s paintings), as well as a rough coated dog that looks rather like a Portugese Water Dog or an Otterhound.

I have also given up my couch to the pets! There is just no sitting on it anymore, sigh. But they like having their own space. 🙂

I have a book of Georgian dog paintings, and just spent a happy hour looking through it (it’s research!! Really!)

It is hard for me to say what is my favorite breed of dog, because I’m such a cat person. My sister has 4 Yorkies, but I can’t exactly say they are my favorites. I’m rather fond of the Newfoundland next door–or she is fond of me…And my friend Helen’s rat terrier loves my husband.

Friends of our have a big, friendly dog named Dante. He’s a mutt, probably part German shepherd. We went on a camping trip with a bunch of people and the kids put on a play by the campfire. They needed a big scary wolf and Dante obligingly played the part, wagging his tail the whole time. So cute.

My mother had a pair of pugs for YEARS – Elvis and Priscilla. They had little outfits, but for the most part they lolled on the futon in the den until it was time to go to bed and then scrambled under the covers with my mother when she went to bed. Elvis lived to be seventeen and Priscilla (perhaps the most airhead dog ever to draw breath!) lived to be nearly nineteen. They were the sweetest dogs. She has a Pom and a tiny chihuahua now.

I owned a series of deaf Great Danes, the last – my Glory-girl was one of the most amazing dogs ever born. She was a great ambassador for the breed and because she knew about fifteen signs in American sign language she was a great inspiration to deaf children. She was a little over nine years old when I lost her and that short lifespan is the reason I don’t have large breed dogs now – just chihuahuas and miniature dachshunds and a very obese basset hound.

King Charles spaniels are particular favorites of our family as we got one when we were kids in England and he lived long after we returned to the States. They are just adorable dogs!

I grew up with a wonderfully well-mannered Scottish Terrier named Piper and his bad tempered little sister, a West Highland White Terrier called Drummer… My sister and I followed our Piper everywhere! He was well-loved by the family and the whole neighborhood too! He lived til he was 15. Now I have my own lovely scamp of a mutt named Rigby. He looks just like Snowy from the Tin Tin cartoon.