This Christmas is exceptionally busy–and not with Christmas things! So I haven’t even been Christmas shopping yet. So today I went looking for an old Christmas posting and I found one! 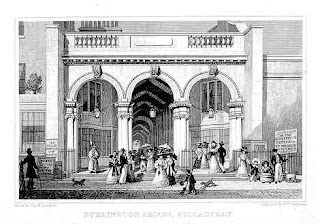 Here’s what I said I’d purchase for my family and friends back then. Seems just as good to me now….If the year were 1819 and I was shopping in London.

If in Regency England, first place I’d go would be to the mall–The Burlington Arcade, I mean.

The Burlington Arcade is a covered shopping area behind Bond Street on what was formerly the garden of Burlington House. Lord George Cavendish, younger brother of the Duke of Devonshire owned Burlington House and wanted to do something to prevent ruffians from throwing trash and oyster shells into his garden. He hired architect Same Ware to design the arcade which had spaces for 72 enclosed shops. The arcade opened in 1819 and was an instant success. It is still the place to go for fashionable shopping in London.

On my London trip this September 2014, I walked through the Arcade and glanced at the windows of all the lovely shops still doing a thriving business.

If I can’t find all the gifts in the Burlington Arcade, I can shop at a department store–Harding Howell and Co, which sells everything from lace and every kind of haberdashery, but also jewelry, watches, clocks, perfumery and more. Harding Howell and Co. was opened in 1807 in Pall Mall, but it closed in 1820, so I couldn’t visit it on my recent trip.

Dear Husband: He likes gizmos. And he loves clocks. I think I’ll buy him a French clock. But he’d like a gizmo toy, too, like some kind of automaton.

Dear Daughter: She’s a music lover. I might buy her the latest piano sheet music from the music seller in the arcade although guitar is her instrument of choice. Maybe she’d play the harp in the Regency.

Dear Son: He’d probably want the latest in dueling pistols. Or the best hunting whip, although in today’s world, his shooting would be confined to video games and his vehicle accessory would probably be a GPS or cell phone holder.

Dear Daughter-in-law: (she wasn’t on that 2011 list, but I must add her now) She is an artist, so I would purchase art supplies from Thomas Hewlett Oil and Colourman near the Egyptian Hall, like Jack did in Gallant Officer, Forbidden Lady.

Dearest Grandson!: (also not on the 2011 list – he’s only 17 mos. old, after all) Grandson loves cars and trucks, so I suppose in 1819, he might like a toy horse and carriage from Mr. Hamley’s toy store on High Holburn Street, the toy store where Anna and Brent bought toys for Brent’s children in Born To Scandal.

Dear Sisters: for one I’ll have to go to Jermyn Street and buy her some fragrance from Floris (where she and I shopped this past September!). The other might like a pretty new bonnet–I’d get her a Yorkshire terrier puppy (she has 3 already) but the breed won’t exist for a few years yet.

Dear Friends: Oh, I know what I’d buy them. BOOKS!!! Perhaps in 1819, I’d buy them two books in one. Northanger Abbey and Persuasion, published in 1818. Sadly the author died in 1817, but she is our favorite author.

What gifts would you buy for friends and family if you were shopping in Regency England?

And, are you as ill-prepared as I am this year?

For Mom – a cookbook of some sort. She loves cooking new and different dishes, although she draws the line at eels and haggis.

For Brother #1 and his wife – a hamper from Fortnum and Mason as they love gourmet foods.

For Brother#2 – the latest Manton fowling piece as he loves to hunt. For his wife a new bonnet or a shawl.

For Dear Nephew – A telescope or some other scientific tool.

For Dear Niece – Perfume from Floris and ribbons for her hair.

For Dear Grand Niece – A tiny saddle so she might ride my brother’s huge pit bull. The dog dotes on her and insists on taking naps next to her on a pallet and sleeping under her crib at night. And perhaps am India rubber ball for the two of them to play with in the garden.

Many years ago I gave up trying to think of thoughtful, clever gifts. I tended to fail more often than not. Nothing’s worse than giving someone a gift, and watching the light die in their eyes.

Now, I only give hampers, granted, hampers that I myself put together, as the commercial hampers are well and truly overpriced.

I raid my local gourmet shop and snag items (Like fig-flavoured vino cotto) when they’re on special.

The light ignites in the eyes of those I gift with a hamper. That makes gift-giving worthwhile.