A little over two months ago now, my husband, my daughter and I boarded this plane–a LONG direct flight from SeaTac to Heathrow–for the beginning of our European adventure. I thought that over my next few blog posts, I’d share some pictures and stories from our journey, focusing on those of most interest to Regency readers. 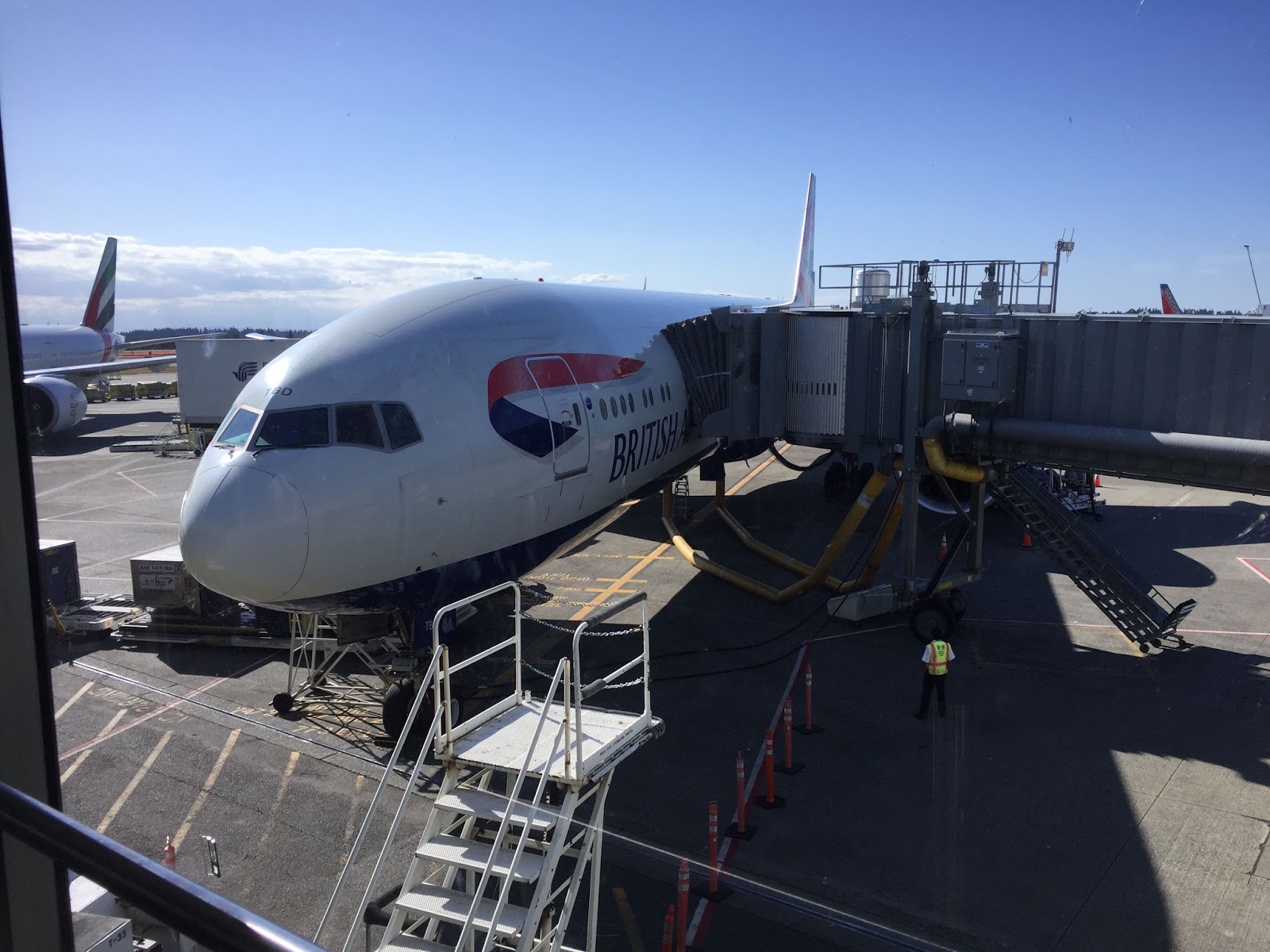 If your vacation is going to focus on history, what better place to start than a TARDIS? (When we asked Miss Fraser what she wanted to see in London, her immediate response was “the TARDIS.” Mr. Fraser was able to track down a blue police box still standing, doubtless just for the sake of photo ops like this one of my two nearest and dearest.) 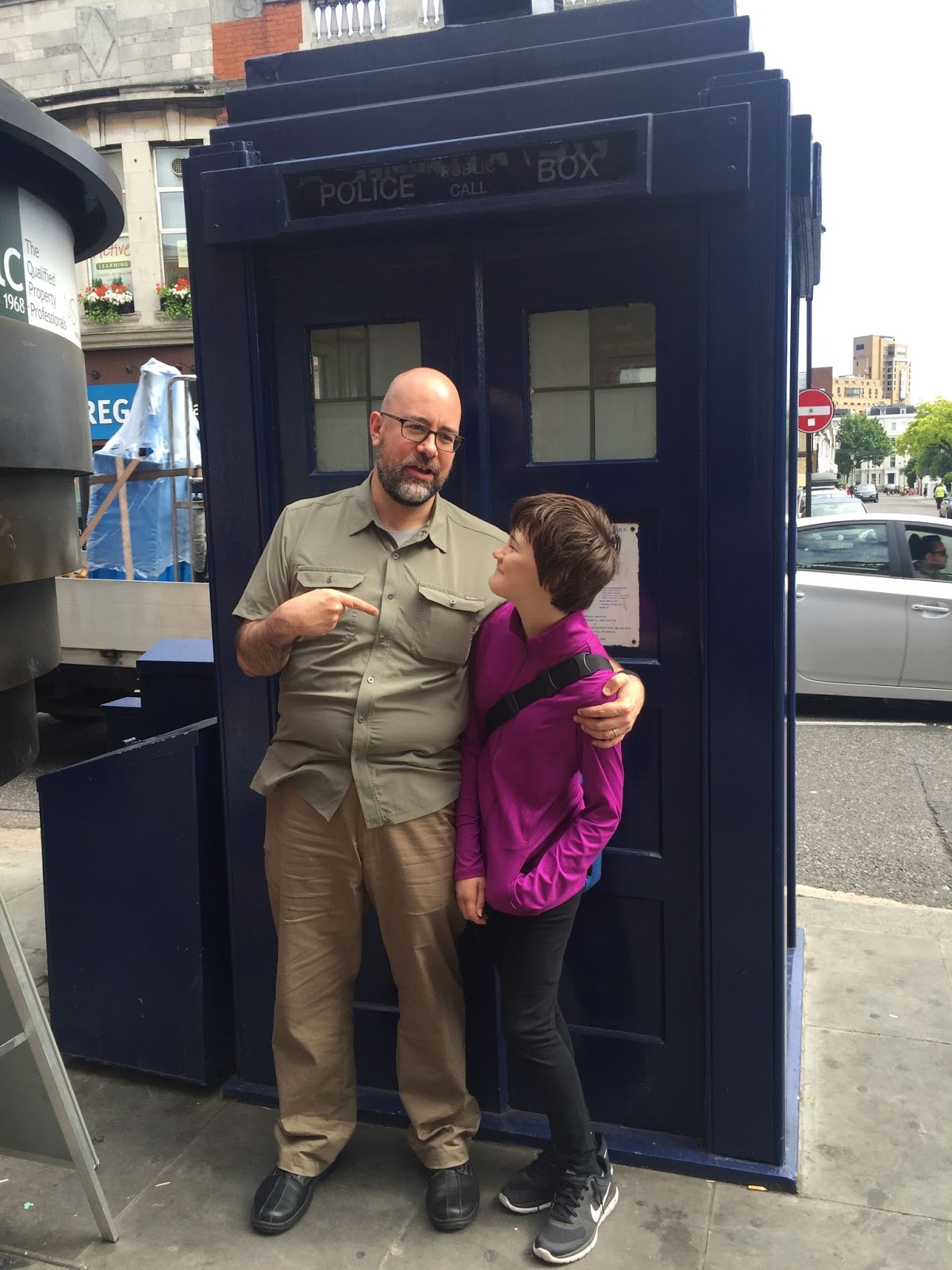 While in London we also stopped by Trafalgar Square, where we saw Nelson atop his column, and Hyde Park Corner, home of a handsome equestrian statue of my beloved Duke of Wellington. 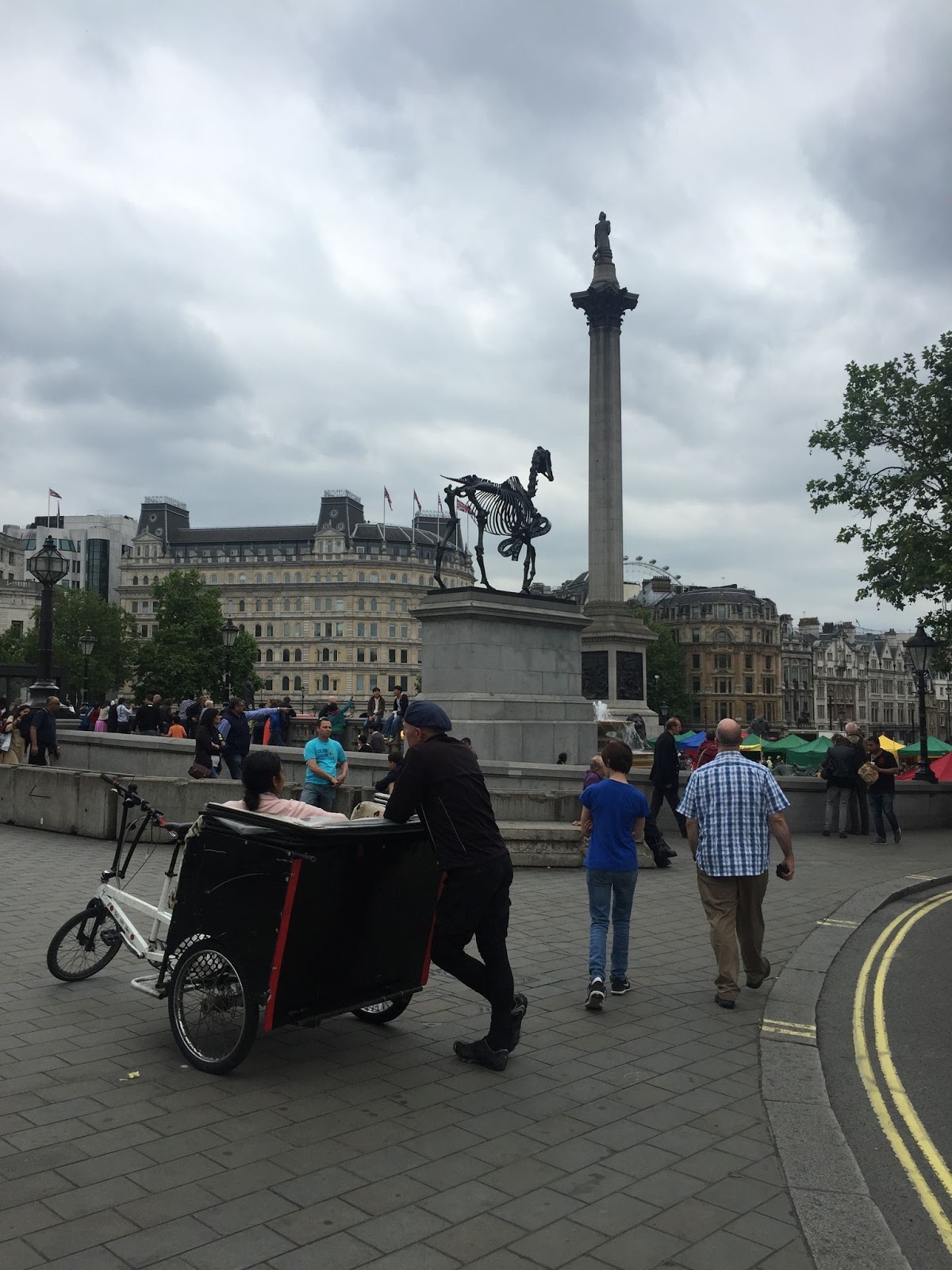 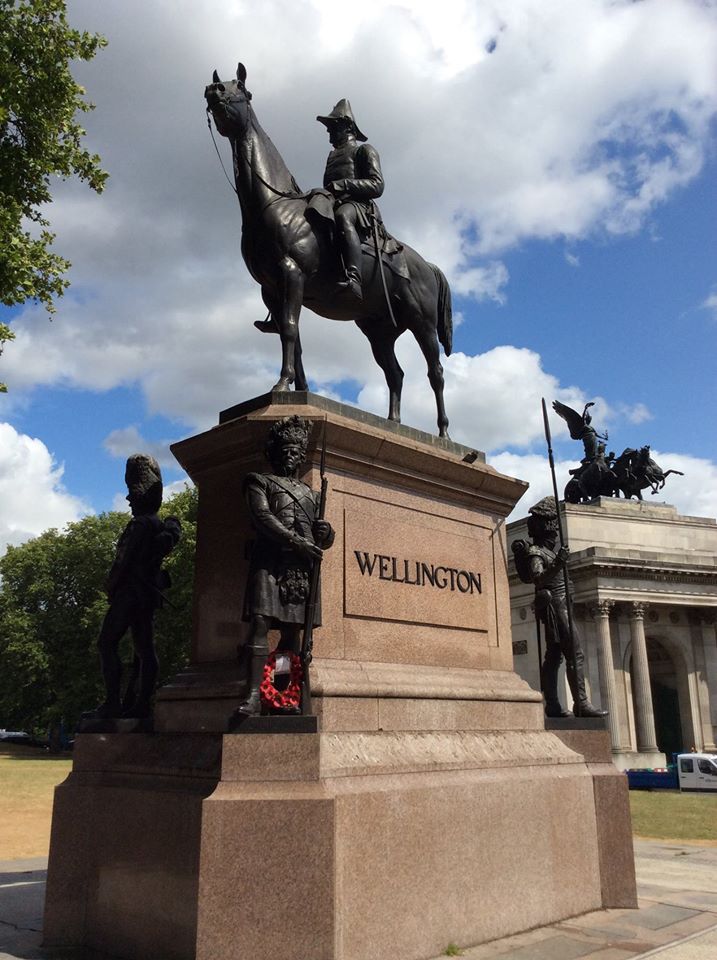 Along the way we visited St Paul’s, where I spent some time in the crypt to pay my respects to Nelson and Wellington at their tombs, but as photography is forbidden in the cathedral, I have no pictures to show for it. Sadly, the same is true of Apsley House, the Great Duke’s impressive London home (my bored daughter’s understatement: “this IS a really fancy house”)…foiling my plans to take a selfie with the outsized and grandiose nude statue of Napoleon contained therein.

I do highly recommend Apsley House for any Regency fan visiting London, incidentally. It’s not one of the Major Big Deal Sights–which means it’s less crowded and you have more time to linger over all the portraits (many of which will look SO familiar to you if you’ve read nonfiction of the era at all), the furnishings, and the general sumptuousness of it all.

But after only a few days in London it was time for Brussels and the Waterloo reenactment. Our entire family loved Brussels. Compared to London and Paris, it has a parochial, small-city feel (despite the whole EU capital thing), and since we didn’t have tremendous expectations for it, almost everything was a pleasant surprise. It’s beautiful, in an echoes-of-antique-grandeur sort of way: 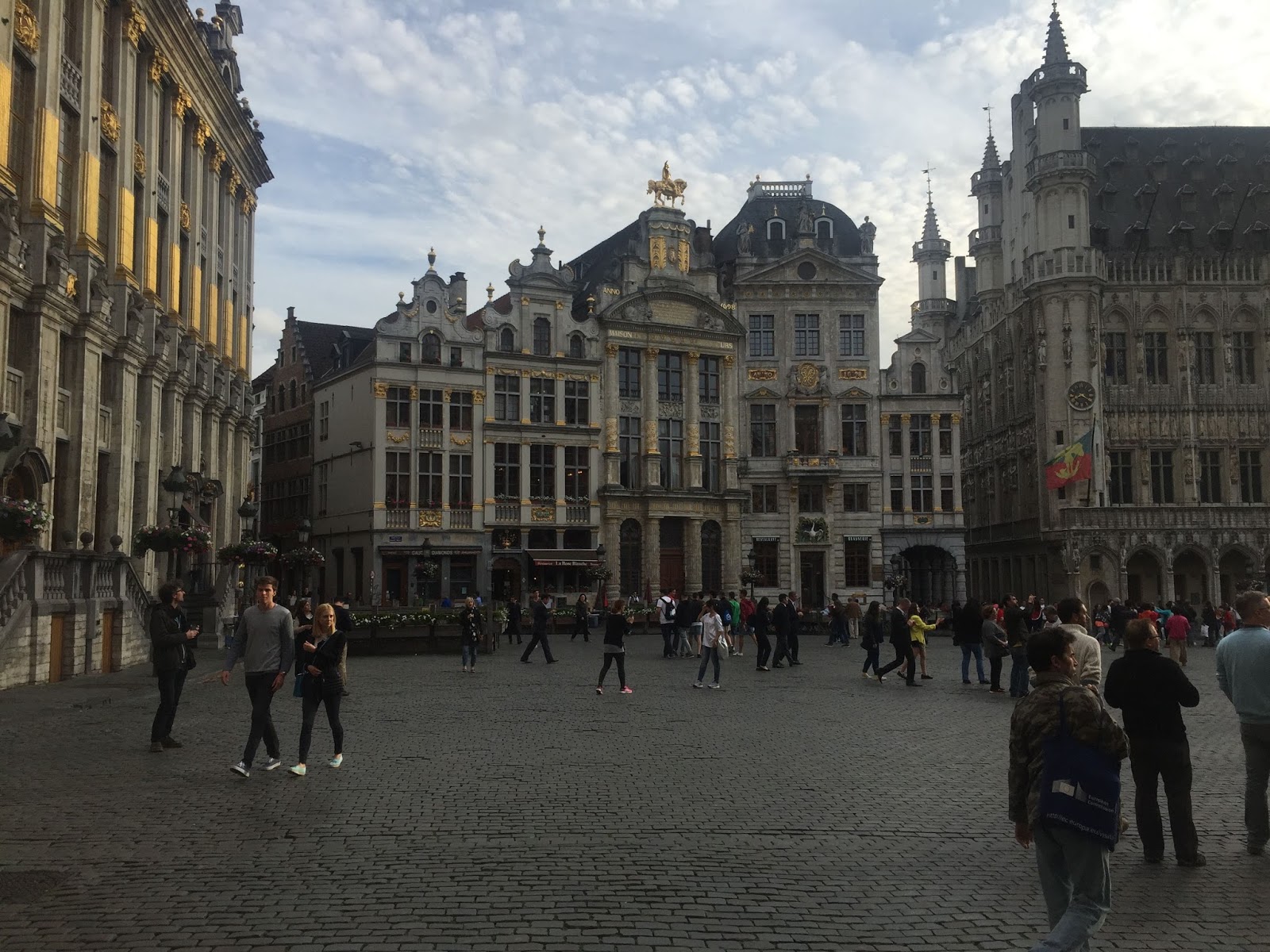 And Belgian chocolate? Even better than you’re imagining. AMAZING. When people ask Miss Fraser what was her favorite place in Europe, she always says, “Belgium, because of the chocolate,” and I can’t really argue that point. (That our Brussels hotel had excellent and reliable wifi doubtless raised it in her estimation too.) I also fell in love with the frites, especially the ones in this little storefront place across the square from our hotel with the tourist-trappy name “Belgian Frites.” I wouldn’t have tried it if I hadn’t noticed the long lines of local teenagers my second day there–after which I had frites with mayo as lunch or an afternoon snack four days in a row.

The Waterloo reenactment, however, didn’t quite live up to all my expectations. It might’ve been better if we’d been part of an organized tour with a guide to show us around. As is, it was a bit chaotic and challenging to navigate and understand what was going on.

The actual anniversary of the battle fell on a Thursday, but the organizers held the reenactment on Friday and Saturday evenings. I wanted to have the experience of standing on that ground two hundred years to the day after the battle, so on the 18th we schlepped out to the battlefield by train, bus, and long walk, and visited the Allied reenactor camp. 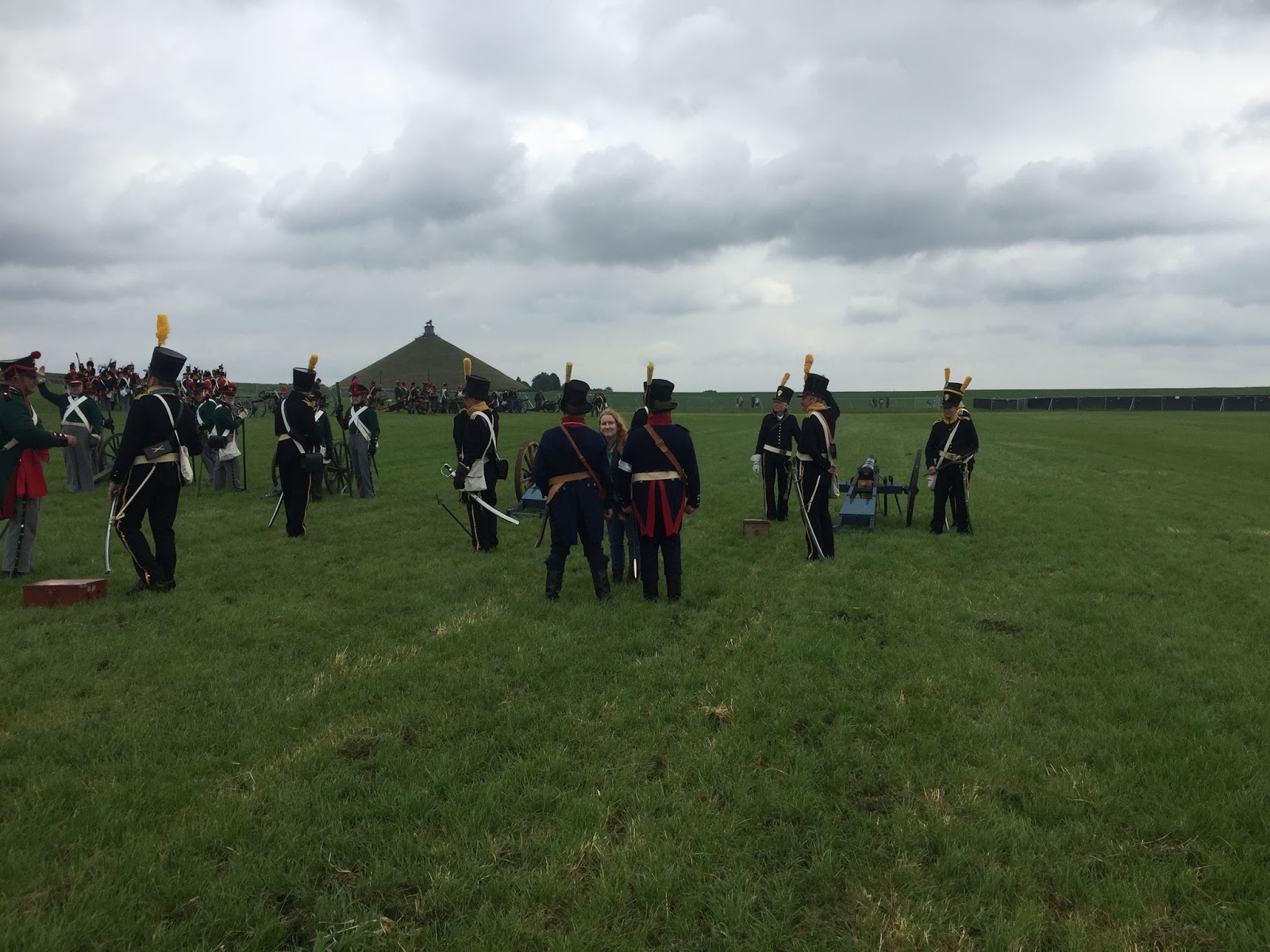 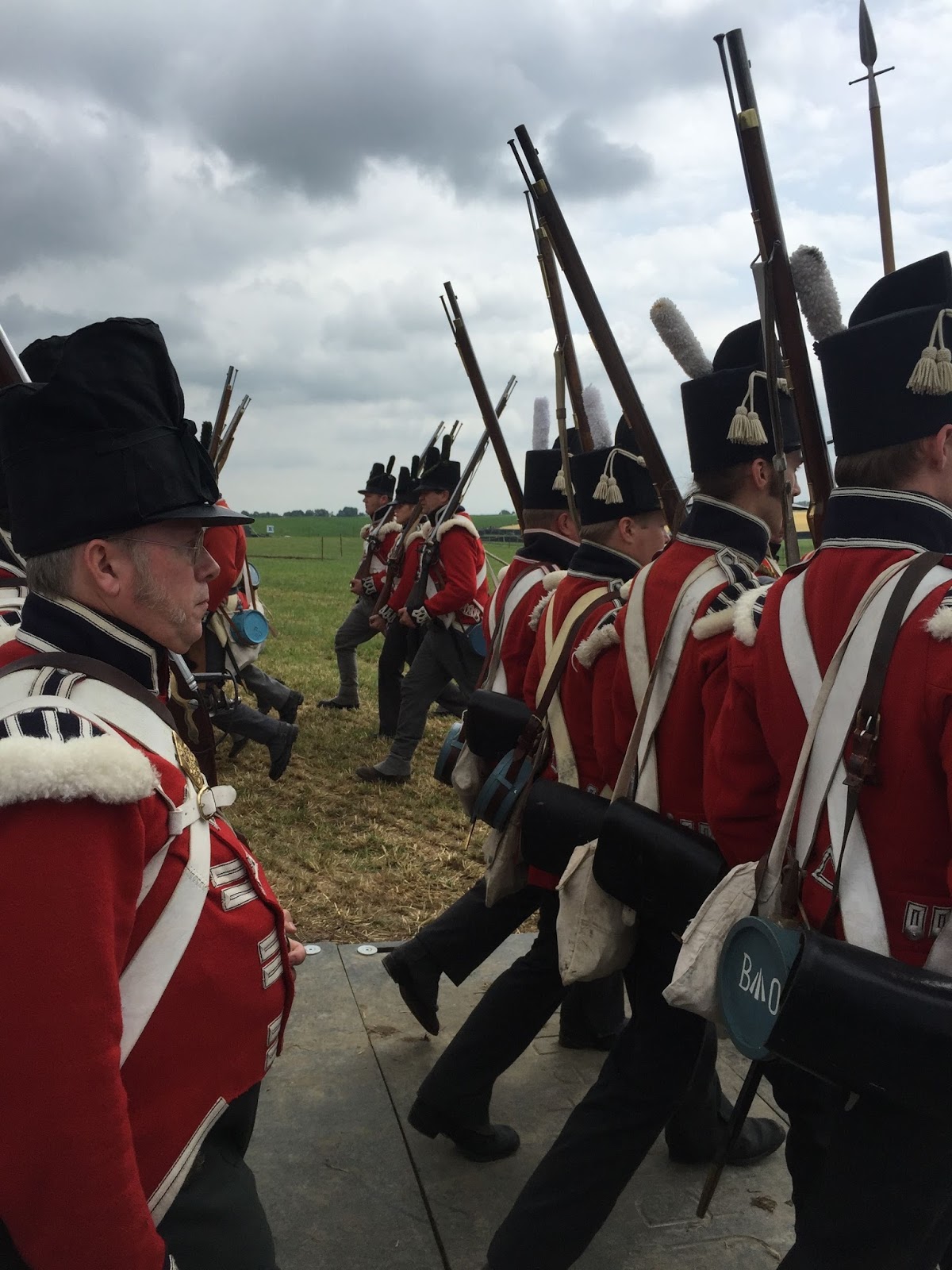 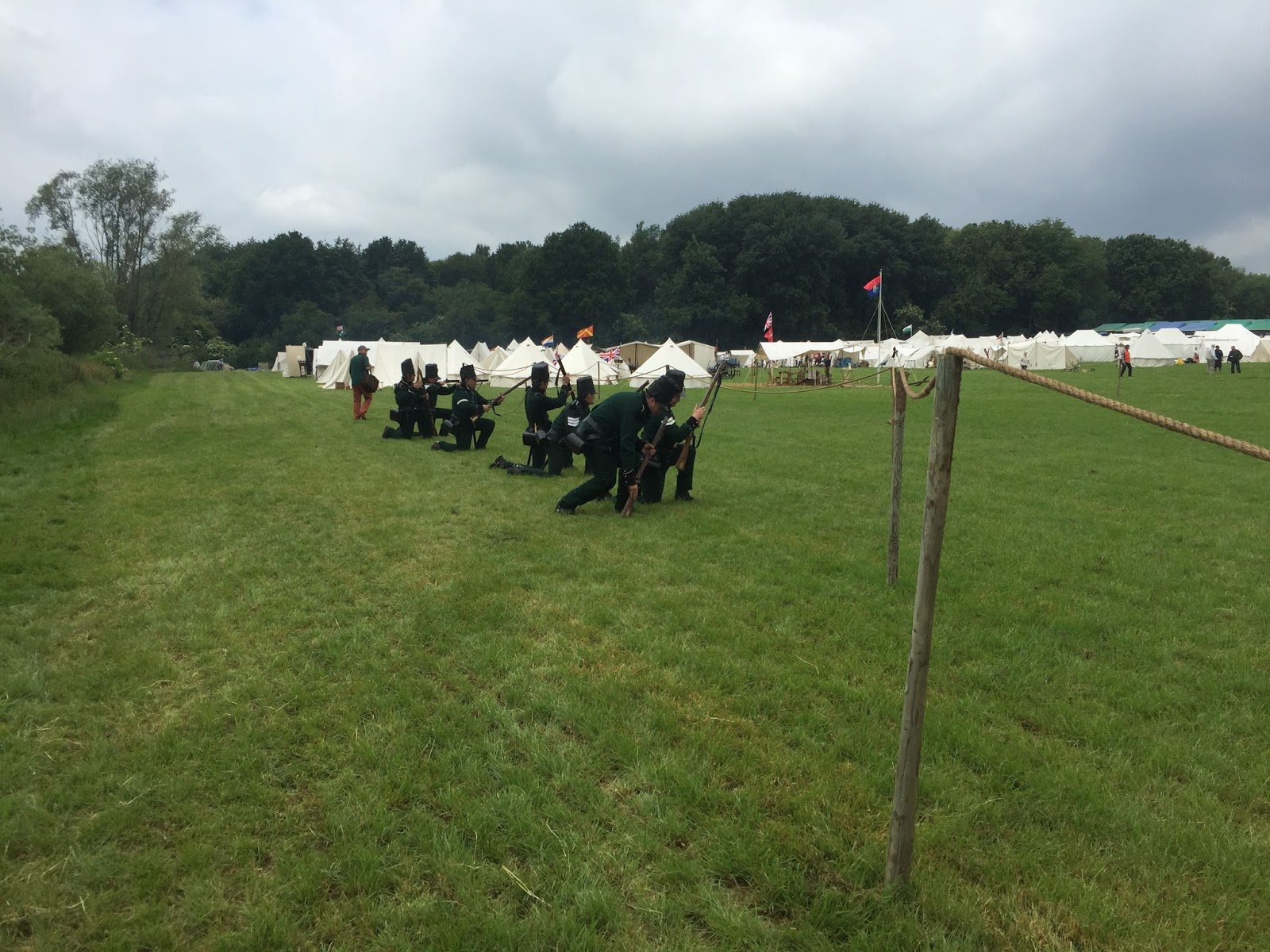 We didn’t get the opportunity to actually hang out with reenactors, somewhat to my disappointment–the handful of times I’ve visited reenactments in the past I’ve gotten to heft the muskets and chat with the people who carry them. Maybe it was just because the Waterloo anniversary was SUCH a big deal, but there wasn’t the same kind of approachability there.

As for the reenactment itself, it was a bit of a challenge to follow the action, even for someone like me who pretty much knows the course of the battle backwards and forwards. That said, it did give a good sense of how very smoky and confusing Napoleonic-era battlefields were: 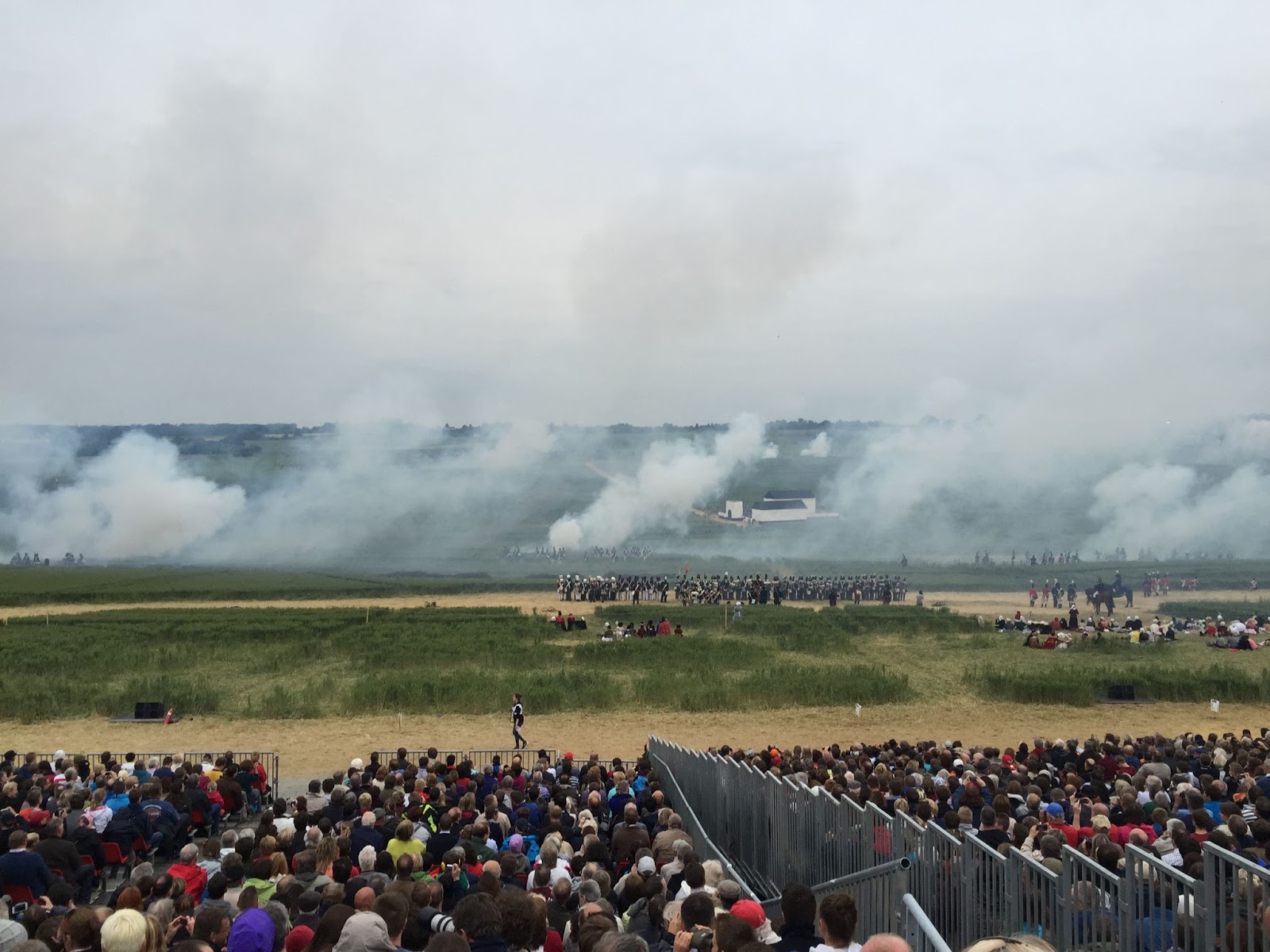 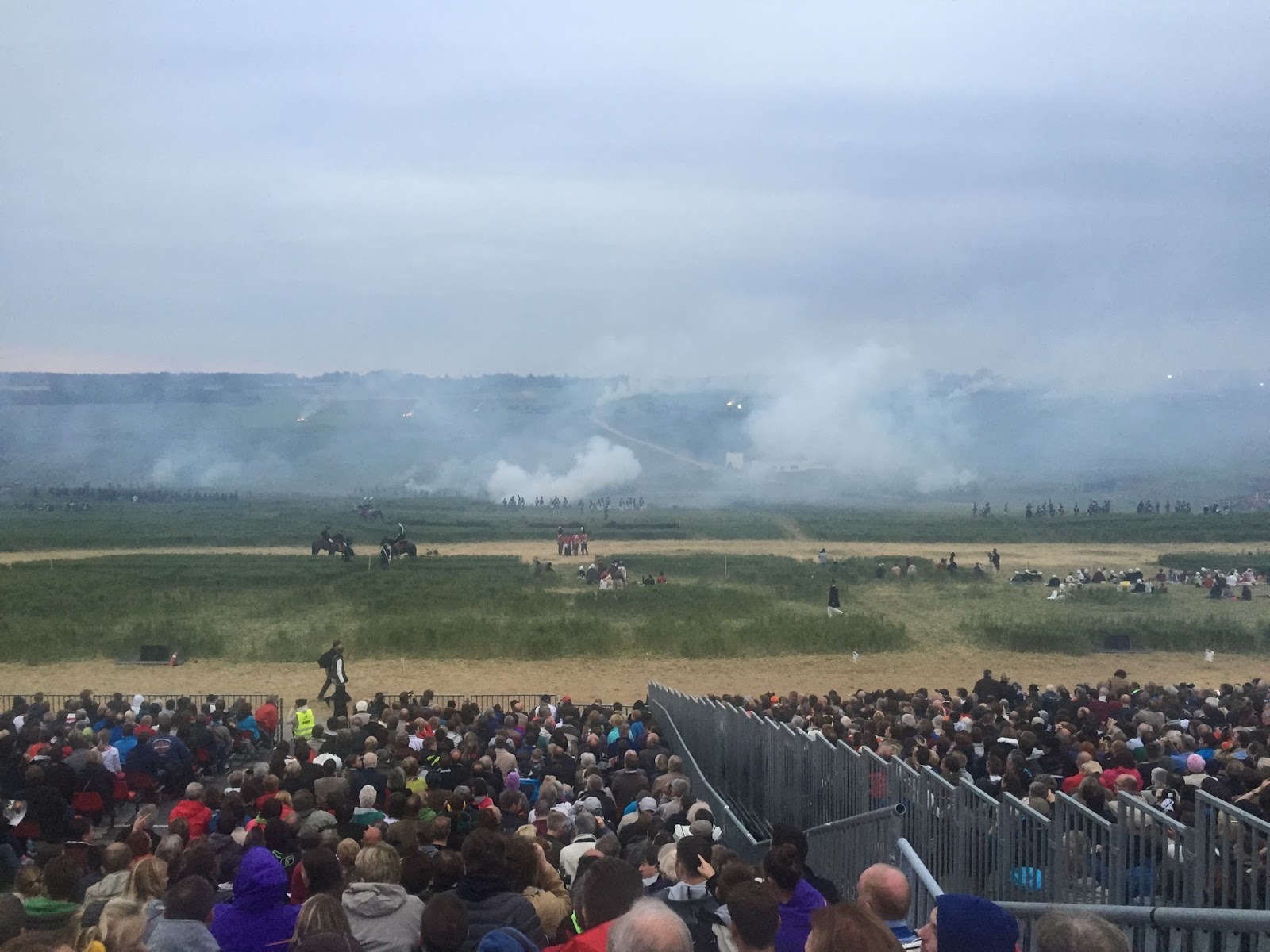 And this was just 5000 reenactors out there for three hours or so. When you imagine what it must’ve been like 200 years before, when between the three armies involved there were almost 200,000 men engaged…whoa.

Even though the reenactment wasn’t everything I’d dreamed it would be, I’m glad I went. When I read or write about Waterloo from now on, I’ll have that much clearer a picture in my mind’s eye for having walked some of the ground and seen all those impeccably costumed reenactors. And, let’s face it, if it weren’t for Waterloo, the odds are I never would’ve gone to Belgium, and I would’ve missed out on that chocolate and those frites…

What about you? Have you traveled anywhere exciting this summer? And do you have travel tales of places that either exceeded or failed to live up to your expectations?

Next time I’ll post about our week in Paris (which exactly met our expectations–it really is that amazing). Expect lots of Napoleon…

Thanks for sharing these pictures. I’ve heard good things about Apsley House. Your recommendation has cemented my desire to talk my husband into visiting it next time we’re in London.

In general we had the best time at lesser-known sites. There’s so much awesome to be seen in Europe that it’s worth seeking out places where you don’t have to battle through a herd of other tourists.

Oh, I envy you your trip, Susanna! And I’m sorry the Waterloo reenactment didn’t meet expectations. Glad you could console yourself with frites and chocolate!

We’ve gone NO WHERE this summer. NO WHERE.

Believe me, after all the vacation time and money we spent on this tripe, we’ll be going NO WHERE for some time to come…

Sorry to be so late to the discussion–I’ve been on the road a lot, taking one daughter to college for her sophomore year and the younger on several college tours.

It sounds like you had a wonderful time, despite the limitations of the reenactment. Thanks for sharing the pictures! Wish you could share the chocolate, too. 🙂