What To Give An Earl

At this time of year many of us are engaged in a holiday ritual–what gifts to buy that special man in our lives. I’m here to help. Of course, you must first transport yourself to Regency England to discover what you might purchase for that special Earl in your life. 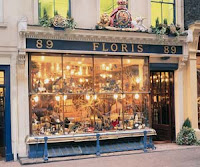 You could go to Floris at 89 Jermyn Street in Mayfair and ask them to create a special scent for your man?

The Floris Shop was founded in 1730 by Juan Famenias Floris. England from his native island of Menorca to seek fortune. Shortly after his arrival in England from his native Menorca he secured premises in Jermyn Street, where the shop still uses the mahogany counter that was purchased directly from the Great Exhibition at the Crystal Palace in Hyde Park in 1851. Beau Brummel used to discuss scents with Floris. Mary Shelley sent an order to Floris to send her two brushes and a toothbrush during her time abroad when she wrote Frankenstein.

Perhaps your dear Earl is a studious sort of man. He might prefer a book from Hatchards, the oldest surviving bookshop in London. Hatchards, on Piccadilly since 1797, has served such famous historical figures as Wellington, Byron, Queen Charlotte.

What book would you buy him? Endymion: A Poetic Romance By John Keats, perhaps? Or something educational, like The History of England: From The Earliest Times To The Death of George II by Oliver Goldsmith. 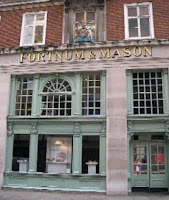 Maybe you cannot give your dear Earl such a personal gift such as scent or a book of poetry. You can always fall back on the holiday standby. Food. He might delight in some tea or spices or preserves from Fortnum and Mason, right next door to Hatchards.

Fortnum and Mason have been selling quality foods since the 1700s, started by a footman to Queen Anne, who enterprisingly remelted and sold the candle stubs, supplementing his income.

I can hardly believe we have to start thinking of holiday gifts! I don’t know about you, but I wish I could be doing my Christmas shopping in London. I’d look in all three of these shops, which I never fail to do when in London, and then I’d visit the Buckingham Palace Gift Shop. Instead, I’ll probably settle for surfing Amazon.

Where in the world would you like to shop?

(a version of this blog originally appeared in 2010)

Fun post, Diane! Now I’m imagining a bookish hero I’d surprise with the perfect hard-to-find book. Easier in fiction than reality! In reality, I find gift-shopping for others stressful and when receiving gifts, I’m often more grateful for the thought than the actual item. I’m trying to downsize and declutter, and there are only a few people who really understand my taste. So I’m all about exchanging easy consumables like chocolate, wine, candles, etc… For myself, I enjoy shopping in antique, secondhand, and thrift shops. I would love to go back and do that in the UK sometime!

Diane, I visited these stores when I was last in London, far too many years ago!! Your post made me start craving another visit –wish that was in the cards for me anytime soon, but alas, tis not to be!! I’ll have to keep visiting vicariously through my characters. Great ideas for what to give an earl!! Fun post.