I Wished for White Christmas

Recently Buffalo, NY (where my mother grew up) had a historic snow storm of 80 inches falling over four days, so much so the Buffalo Bills game had to be played in Detroit. No wonder my mother never wanted to move back to Buffalo! Here in the Washington, D.C. area we’re mostly lingering in the 50s F still. But as I looked for inspiration for my blog today, I came across an old Risky Regencies blog of mine from 2009 when we had our own record-breaking December snowstorm. We managed two feet of snow, but that was more than enough to shut down the whole DC/VA/MD area.

In the past three or four years (ever since I bought a snow blower) we’ve had very little snow. But we’re now in the Christmas season and, though I’m not ready for it to be cold now, it really would be nice to have a white christmas.

In that spirit, I’m adapting that 2009 blog for today. 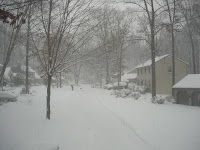 One nice thing about snow is it covers all the dirt and darkness in a blanket of pure white, everything becomes quiet and life, of necessity, slows down. Here’s a photo of that 2009 snow, taken from my upstairs window.

One can almost imagine what it would be to live in the country in Regency England when it snowed, to take walks through the wood, perhaps even to go skating on the pond or zipping over to your neighbor’s house in a horse-drawn sleigh. 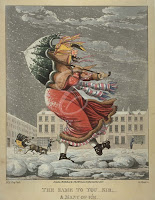 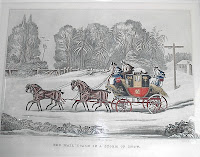 Extraordinary Instance of the Sagacity of a Dog.—Mr. T. Rutherford, of Long Framlington, was, about a fortnight ago, overcome in a snow storm, near Alnwick, and fell. In this state he was exposed to all the horrors of the night, till seven o’clock in the morning. His faithful dog at this time observing a shepherd at a small distance, used every exertion to attract his attention, such as howling, going from and returning to the spot where his master lay. This induced the shepherd to follow the dog’s motions. Mr. Rutherford was found, (then covered by the snow,) carried to a neighbouring publichouse, and, after five hours’ exertion, life was restored, and he is now quite well. 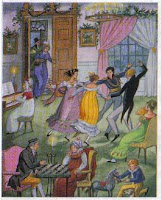 On the other hand, one might have a lovely Regency Christmas, eating Christmas pudding, drinking wassail, playing Christmas music on the pianoforte, dancing or playing cards.

Tell me, do you also pine for a white Christmas?

I wish all my fellow Riskies and everyone else a very happy holiday season!

Heap on more wood! – the wind is chill;
But let it whistle as it will,
We’ll keep our Christmas merry still.

Posting this comment partly as a test of the new website changes! But I agree with you, Diane, about snow for Christmas. There’s just something lovely about it. If only it didn’t have to be cold! LOL.