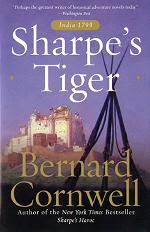 I have a confession to make. With the Sharpe series, I broke my own rule about reading the book before seeing the film adaptation. I started out by reading SHARPE’S RIFLES, saw the film and then just continued watching the series. Just couldn’t help myself, I guess! 🙂
Now I’m making reparation by reading all the books, starting with the earliest. I just finished the first three which are set in India: SHARPE’S TIGER, SHARPE’S TRIUMPH and SHARPE’S FORTRESS. I just loved these books. I find the military history fascinating and Cornwell does a brilliant job recreating scenes I’d read about in WELLINGTON IN INDIA by Jac Weller. But most of all I love the character development. Sharpe starts out as an ex-thief, pretty much a knuckle-dragging, musket-toting goon with few aspirations and even fewer morals. But you also see his potential. These books show the early stages of transformation from the sort of soldier Wellington called the scum of the earth into a hero. I also enjoyed the depictions of Wellington (which felt very real to me) and the fictional character of Colonel McCandless, a mentor in Sharpe’s “hero’s journey”, a grown-up version of Jiminy Cricket helping to keep Sharpe on the path of honor. 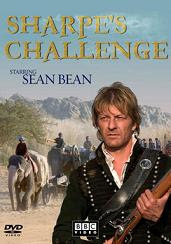 I also watched SHARPE’S CHALLENGE, the film in which Sharpe returns to India several years after Waterloo on a mission to find his missing buddy Sergeant Harper. Elements of the three India books were recast to fit the new time frame. For that very reason, I found the film disappointing. I missed the early character development and also didn’t appreciate that they killed off Lucille to allow Sharpe this last adventure. The romantic elements were scanty, after all. I don’t know why Sharpe could not have completed his mission and returned to Lucille. But that’s why I’m a romance writer, I guess!

Pluses of the film: evocative views of India, another chance to see Sharpe and Harper in action and a truly horrible villain played by Toby Stephens.

Has anyone read these books or seen the film? What did you think?

And if all this talk of India and Sharpe make you feel hot for any reason, do go ahead and refresh yourselves with a visit to Candice Hern’s new collection of Regency era fans. They are very lovely!