Today, I’ll be with family, celebrating my granddaughter’s first birthday. In the Regency, modest celebrations on birthdays were the norm, unless you were royalty, in which case BIG celebrations might be in order. Non-royal families would celebrate with a cake or some special treat, but not the big party with lots of presents and balloons and lots of cake and ice cream that we think of when we think of birthday parties. That’s what we’ve planned for the cutest granddaughter ever.

But we will also be celebrating Labor Day. 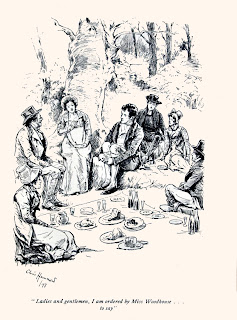 Today’s picnic is a leisure pastime for the ordinary people, a chance to grill hot dogs and play outdoor games, but during the Regency, a picnic was a fancier affair, and the working people of the period may have experienced it much differently than we do today.

In the early nineteenth century, picnicking was a way for the privileged classes to commune with nature, all the while consuming a feast assembled to minimize inconvenience and to enhance the outdoor experience. A beautiful site was selected some distance away. Each guest might have provided a dish to share or the host provided all the food. Entertainments were provided. The idyllic interlude was a pleasurable respite from day to day life.
Except for the servants, for a Regency picnic required a great deal of work.
Servants had to prepare, pack, and transport the food, the furniture, the plates, serving dishes, cutlery, and linens. The whole lot would be loaded on wagons but the wagons often could not reach the exact site of the picnic, so that the food, furniture, etc. would all have to be carried the rest of the way by servants, who would then have to set up everything, serve the food, and attend to the guests in any way they required. When the picnic was over, the servants had to clean up, repack everything, and carry it back. 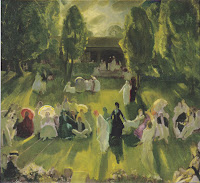 It wasn’t until later in the Victorian period, with the rise of the middle class and the ready train transportation that picnics became a less exclusive leisure activity.

The 1996 TV movie of Emma, the one starring Kate Beckinsale, shows the effort of the servants in providing the relaxing picnic enjoyed by the more privileged others.

On this day, then, while we celebrate our Labor day, let’s remember all those who labor so that we might lead more comfortable lives. Those people who make our prepared foods for our picnic. Those who build the cars that drive us to the picnic. Those who maintain the picnic areas. Those countless men and women who keep us safe. To all workers, let me say a heartfelt thank you!

Have a happy day!