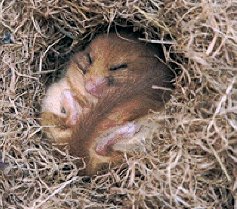 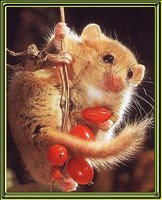 or, less high-falutingly, the aaaaw factor.
Isn’t this the cutest thing you’ve ever seen? Definitely cuter than Jeremy Northam, smarter than Orlando Bloom, more adept at drilling its way into hazelnuts than Sean Bean and the rest… Muscardinus avenallarius aka the dormouse, aka the hazel dormouse, dory mouse, sleeping mouse, sleeper, seven sleeper, or chestle crumb. Shown at left in one of its typical pursuits, the dormouse spends about three quarters of its time asleep, including a hefty hibernation from fall to spring.

The dormouse is native to Europe and in England lives mainly in wooded areas and coppices in the south. Because of changing agricultural practices and the destruction of ancient hedgerows, the dormouse is now a protected species. 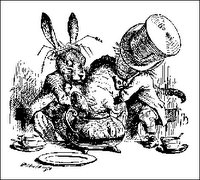 Lewis Carroll immortalized the dormouse in Alice in Wonderland at the Mad Hatter’s Tea Party, where the dormouse is subjected to various indignities (to keep it awake and either encourage or prevent it from speaking), including being stuffed into the teapot.

Byron (yes, this is the Regency tie-in) made this comment on life:
When one subtracts from life infancy (which is vegetation), sleep, eating and willing, buttoning and unbuttoning–how much remains of downright existence? The summer of a dormouse.

Inviting your favorite rodent stories and reminiscences, or comments on Shakespeare, St. George and dragons since I’ve just noticed the date and realized any of those would have been a more appropriate post!