One glance at a book and you hear the voice of another person, perhaps someone dead for 1,000 years. To read is to voyage through time.

This week, the arts and entertainment world has been buzzing with the accusations that Kaavya Viswanathan plagiarized from Megan McCafferty, Sophie Kinsella, and Meg Cabot in her book How Opal Mehta Got Kissed, Got Wild, and Got a Life.

The passages she allegedly copied are striking in their similarity, which begs the question of what the heck was she thinking? But when the story first came out, before I’d noticed the similarities myself, I was pondering what makes an original story. Is it the plot? Well, sometimes; certainly science fiction and fantasy authors create distinctive plots all the time. In romance, however? No. Our plots can be distilled to this: Female and male meet. There is a conflict to what seems like a perfect relationship. Bad things happen, good things happen, until the conflict is resolved and the female and male can be together.

I even had to admit to borrowing from others’ work, too; not in the open, Viswanathan way, but in inspiration (the picture below is of Calliope, the muse of arts and poetry). For example, in the last edit of A Singular Lady (the version that got it sold to Signet), I added an evil uncle whose cane dropped a piece of wood which my heroine kept in her pocket to remind her of what she had to do to save herself and her family. I thought of that after reading Judith Ivory‘s Starlit Surrender, where the heroine sees a red handkerchief she knows belongs to a woman in the hero’s past (plus Judith Ivory gave a talk on the Writer’s Toolbox and explained the whole concept of objects taking on additional meaning, which is when the epiphany struck). I remember somewhere Eloisa James saying she got inspired in her love scenes by reading Loretta Chase‘s Lord Of Scoundrels, which she keeps within easy reach of her computer when she’s writing. 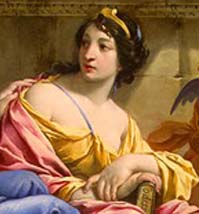 But what keeps most authors’ work from being labeled plagiarism is VOICE. That intangible thing that keeps us reading the same old story time after time. Voice is the way the author says things, which is why the plagiarism accusation cuts so deep; stealing someone’s VOICE is stealing someone’s way of saying things, not like Jamiroquai borrowing Stevie’ Wonder’s phrasings, or Christian Slater doing a Jack Nicholson impersonation, but stealing someone’s core personality.

I’ve been told that, for all my failings at plot and correct titles, I’ve got a good, distinct voice. I value those compliments; plot and title stuff can be corrected, achieving a distinct voice is a lot harder to do. My favorite authors possess their own, distinct voices–authors like Loretta Chase, Eloisa James, Anne Stuart, Mary Balogh, Julie Anne Long, Judith Ivory, Julia Ross, and I could go on and on (and that’s just in romance!).

So–when you read, do you read for plot or for voice? Do you savor the author’s voice? Which authors have the most distinctive voices?

Thanks for being vocal,

Thomas Chatterton, the anguished teenage poet, was one of the great fakers of the Romantic period–his short-lived and unsuccessful career, which started with him faking medieval poetry, ended with his suicide in an attic at the tender age of eighteen.

And plagiarization is something fiction writers are too often accused of…after all, all regencies are about fresh-faced ingenues and rakes, right?…aren’t they? Even though academic story analyses have proposed that all story-telling is derivative, and derive from a handful of basic plots, it’s something we are accused of far too often.

As a living example of how different writers can take a simple plot premise and work it into something different, visit Diana Peterfreund’s Great Blog Voice Experiment. Diana invited twelve writers for their contribution, and each is different and interesting. Why? It’s a question of individual imagination and individual voice–whatever voice is. It’s one of those difficult-to-define elements that distinguishes a writer’s work, and I hold the theory that the stronger the voice, the more extreme the reader’s reaction.

Can you define voice? Which writers have a strong voice, and what do you like/dislike about their work?