Brunel, bananas, and an apology 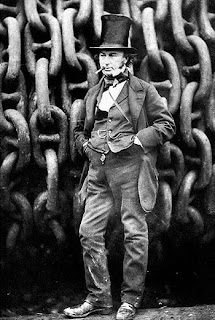 First, in the interests of encouraging others to waste time online, you can now find me on Twitter, not that I have anything particularly interesting to say there.

Today is the birthday of Isambard Kingdom Brunel, born 1806, possibly England’s greatest engineer, whose masterpieces like the Great Western Railway, the Thames Tunnel and the Clifton Suspension Bridge are still in use today. He was the inventor of the first propellor-driven ocean going iron ship, the SS Great Britain.

It is also–and I hope Megan wasn’t planning to blog about this exceptionally important date–almost the anniversary of another important date, April 10, when, in 1633, bananas first went on sale in London.

You can imagine–or at least, I can–the bemused discussions that took place regarding the fruit. I think we should throw the squishy part away, it’s probably gone bad…Too bloody expensive–quick, they’re not looking, put one in your codpiece…

The banana was first introduced to North American in the 1870s and an early, helpful publication, A Domestic Cyclopaedia of Practical Information stated: Bananas are eaten raw, either alone or cut in slices with sugar and cream, or wine and orange juice. They are also roasted, fried or boiled, and are made into fritters, preserves, and marmalades.

Banana marmalade? Jam? And it still doesn’t explain if you’re meant to consume the whole thing, the inside, or the outside, which I’d think would be the most helpful hint of all.

And now, I have decided to do an about face. I was wrong, I admit it. Jane Austen is a romance writer. I’ve been thinking about this for some time, and here are the points which made me change my mind:

Cowboys. There are many rural settings. Harriet Smith, in Emma, has a beau who owns at least one cow, (we know because it’s Harriet’s favorite). Therefore, Robert Martin is a cowboy. Yeehah. And Knightley himself, a powerful alpha male landowner, has to be a ranch owner. Pam Rosenthal blogged persuasively over at the History Hoydens that most of Knightley’s land has to be enclosed and is therefore grazing land. 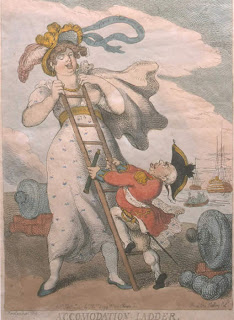 Navy Seals. Close and almost a cigar–Persuasion is rife with manly men in uniforms, the cream of the Royal Navy, muscles rippling beneath their skin tight uniforms.

Sex. Who can forget the torrid sex on page 47 of Mansfield Park?

TSTL Heroines. Catherine Morland (Northanger Abbey, with the added bonus of being a TSTL heroine in her nightgown).

Can you think of any other examples? Let us know!

In Praise of Bananas 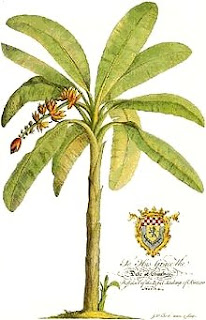 Today is the anniversary of the day in 1633 when bananas first went on sale to an amazed London public.

It’s a little-known fact that the Regency was a great banana-eating epoch, from the famed insipid banana cream pies at Almack’s to the overpriced bananas served at Vauxhall, sliced so thinly they were almost transparent. Delicate and expensive to import, bananas were a sure sign of conspicuous consumption.

As an art motif, they lost out to the gorgeously symmetrical and elegant pineapple, and although Byron mentions in several of his letters his epic work on bananas, the manuscript has sadly been lost to posterity. Wedgwood’s banana line of tableware was quickly discontinued after derogatory comments.

Gentlemen at White’s would frequently lay a banana peel on the pavement outside the famous bow window and make bets on how long it would take for someone to slip.

Beau Brummell introduced the famous banana pantaloons which were immediately banned by most hostesses for drawing room wear. 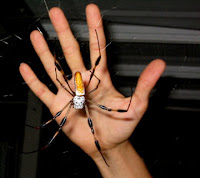 Sadly for the English, they were not blessed with such fauna as the banana slug or banana spider.

For more information on bananas, try this online museum, bananamuseum.com or join the forums at bananas.org. 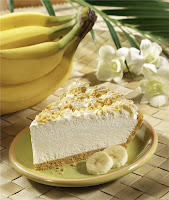