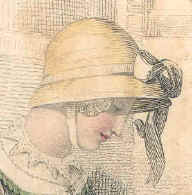 When I was putting together last week’s post on best and worst Regency dress fashions, I also ran across many…um…inspiring images of headgear. As with the dresses, some were gorgeous and flattering (just what we like to see on a proper Regency heroine) and some were downright ridiculous (let’s save them for comic villainesses, please!)

Some of my favorites:

Best #1 (upper left): 1810, from Ackermann’s. This style was called a “cottage hat”. I think it’s nice and simple and just the thing to go with the elegant dresses of the time. It also strikes me as a bit 1920’s ish, but I’m no expert on that. 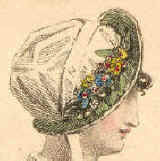 Best #2 (right): 1811, also from Ackermann’s. For me, this is the right way to use flowers. Not too many (even though it does look rather as if she has a bee in her bonnet!) and the asymmetry is cute. 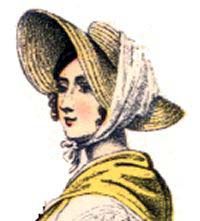 Best #3 (left): A gypsy hat, popular for country wear throughout the early 19th century. Nice and casual and, in the days before SPF 45, good protection for that delicate skin. I also saw a portrait of a somewhat older woman wearing one of these, and it looked great on her, too. 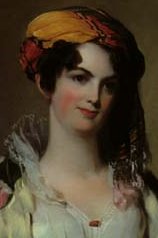 Best #4 (right): Gilmore’s portrait of Sarah Reeve Ladson, 1823. Turbans often look ridiculous to me, but this one struck me as kinda cool, exotic, maybe a bit Byronic. Not everyone could pull this off, but if you have this sort of sultry dark coloring, I think it works.

Now for the sublimely ridiculous…

Granted, some of these are caricatures of contemporary styles, but they give us an idea of the results of a trend gone wild! 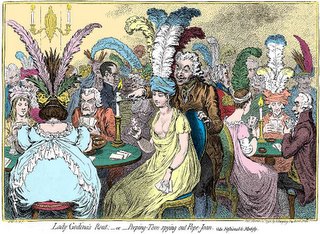 Worst #1: “Lady Godina’s Rout — or — Peeping-Tom spying out Pope-Joan. Vide Fashionable Modesty”, a March 12th 1796 caricature by Gillray. OK, this one speaks volumes on its own. But I’ll add that feathers do appear to have their use as a hiding-place. Also, perhaps, to balance out wide hips???? 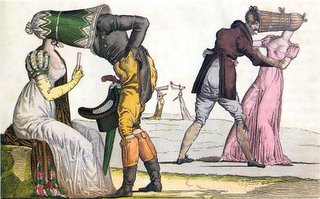 Worst #2 (right): French satire on the poke bonnet (“Invisible”); No. 16 in the series of engravings, “Le Suprême Bon Ton” from the second half of the 1810’s. More proof that outrageous millinery has its uses. Any guesses as to what they’re actually doing in there? But of course, these people are French. Need I say more? 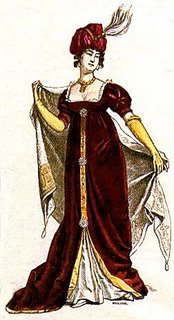 Worst #3 (left): 1810 turban. I’m rather surprised she can stand upright under that thing. Looks like she’s wearing a miniature beanbag chair on her head, and the feathers look like they came from an anemic rooster. If you’re going to wear dead bird feathers on your head, at least invest in some good peacock or pheasant! 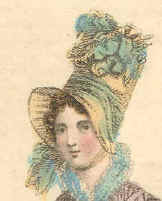 Worst #4: 1817, The Lady’s Magazine. Everything I’ve heard about carriages of the time indicates they were rather small. Did the lady wearing this have to crawl in on hands and knees? Just think about what she might have exposed in doing so! OTOH maybe this is a style adopted by petite women in a vain attempt to look taller. You’re not fooling anyone, dears, just embrace who you really are! 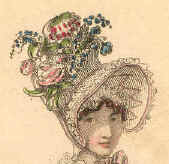 Worst #5: 1818, from La Belle Assemblée. These bonnets trimmed with a profusion of flowers and/or fruit make me wonder. Imagine you’re wearing the latter out for a drive with a rakish gentleman, and then unexpected weather drives you to seek shelter in some secluded cottage or barn (of course that never happens in novels!). Perhaps you could disassemble and eat it.

Actually, I have to admit this last one is kinda fun, the sort of thing that would be a blast to wear to a costume party, for laughs. I think it would be fun to wear a turban sometime, too, though most of them seem a bit . . . dowagerish. For now, I’d rather see myself as a stylish matron.

So, Riskies and dear guests, which hats do you like, or think you would most enjoy wearing?