A Piece of Cake

Lately I have been thinking about many things wedding (as well as many things deadline and many things revision-y).  My favorites so far have been dresses (of course!), and, since I have a terrible sweet tooth, cake.  I think I want to go for something chocolate, or at least white with chocolate filling, but haven’t made up my mind yet.  So today I decided to take a quick look at some cakes of the past.

In ancient Rome, a barley cake was broken by the groom over the bride’s head for good luck.  (Like so many other wedding things we do and don’t know why–it’s for luck).  In medieval times, there was something called a “bride’s pye” (one recipe of which calls for cockscombs, lam testicles, sweetbreads, oysters, and–thankfully–spices).  The traditional French wedding cake is a croquembouche, sort of like glazed profiteroles glued together with spun sugar) is said to come from another medieval tradition where the bride and groom had to kiss over a large pile of cakes.  Why?  Luck!!  (or superstition–much like the tradition of bridesmaids taking a piece of cake home to put under their pillow so they will dream of their own future husbands.  This sounds very messy to me)

Like so many wedding things, cakes became more elaborate in the Victorian era.  Sugar had become more plentiful and affordable, and after Victoria had a white wedding cake, white icing became known as “royal icing.”  In Carol Wilson’s article “Wedding Cake: A Slice of History” she says that elaborate whorls and decorations of icing and fresh flowers and columns were “a status symbol, a display of family wealth.”  (I tried to link to this, but it doesn’t appear to be available any longer).  I think this notion is still valid, considering how expensive cakes have become.  I have friends who have spent over $1000 for a cake; a new trend is having a cake made of styrofoam, with the guests served discreetly from a cheaper sheet cake.  (my own wedding is very small, so I probably won’t need to resort to quite this level of subterfuge…)

The queen’s daughter Princess Louise (the one who married a “commoner”) had a piece of her wedding cake sold at an antiques fair a few years ago for $215.  A bargain compared to the piece from the 1937 wedding of the Duke and Duchess of Windsor, which sold for $29,000.

The English traditional cake is a plum or fruit cake (which I think Will and Kate had at their wedding…), in the US we consider a white cake traditional.   When Elizabeth II married in 1947, her cake weighed 500 pounds; Princess Diana’s cake, encrusted with marzipan Windsor coats of arms, was 5 feet tall.  (I wonder if they served sheet cake on the sly??)

These are a few I am thinking about: 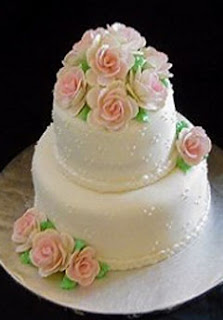 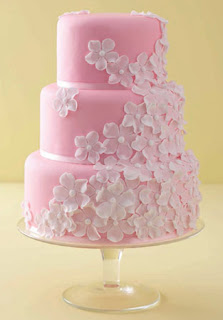 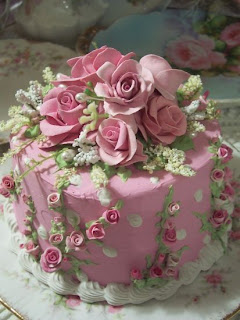 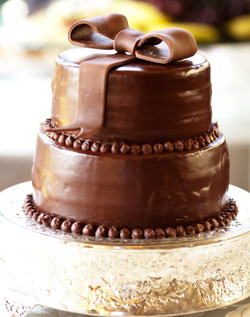 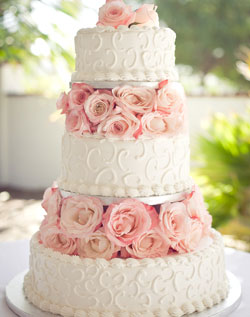 (The ones with pink roses look like my parents’ cake 40 years ago, so I was going to try and reproduce it for my own wedding…)

What is your favorite kind of cake??  What is the best cake you ever had at a wedding?