I am deep in “finishing a book” mode and coming up with an interesting topic for my blog seemed impossible. So I went back to some old postings I wrote and found one worth repeating. It was from 2008 and seemed apropos since many of us will be taking vacations and visiting museums and historic sites that tend to attract crowds (like the 4th of July holiday weekend in Washington, DC).

I opened one of my (newly rebound)Annual Registers and found this account from June 27, 1811, about what happened when the Prince Regent opened Carlton House to the public to tour the interior. I’m abridging it greatly!

(This is also apropos because I just wrote a scene where my hero walks by Carlton House with Marc Grenville from Bound by Duty!) 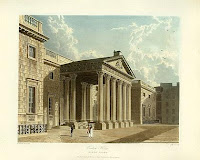 Yesterday being the last day that the public were permitted to view the interior of Carlton-House, the crowd from an early hour in the morning was immense; and as the day advanced, the scene excited additional interest….The gates were only opened at certain intervals and when this was the case, the torrent was to rapid, that many people were taken off their feet, some with their backs toward the entrance, screaming to get out….Lord Yarmouth and the Duke of Gloucester appeared, and announced to the public, that the gates would not be again opened…this, however, had not the desired effect….Those behind irresistibly pushed on those before, and of the number of delicate and helpless females who were present, some were thrown down, and shocking to relate, literally trod on by those behind without the possibility of being extricated. When at last the crowd got inside of Carlton-House gates, four females were found in a state of insensibility, lying on their backs on the ground, with their clothes almost completely torn off. One young lady, elegantly attired, or rather who had been so, presented a shocking spectacle; she had been trodden on until her face was quite black from strangulation, and every part of her body bruised to such a degree, as to leave little hopes of her recovery: surgical assistance was immediately had, but her life was not expected to be saved. An elderly lady had her leg broken, and was carried away in a chair; and two others were also seriously hurt, but on being bled, were restored to animation….The situation of almost all the ladies who were involved in this terrible rush was truly deplorable; very few of them could leave Carlton-House until furnished with a fresh supply of clothes; they were to be seen all round the gardens, most of them without shoes or gowns; and many almost completely undressed, and their hair hanging about their shoulders….

Can you imagine it?

Now there’s an exciting scene for one of our books.

Have you ever been in such a crowd where you feared being trampled? I’ve been at exhibits that were so crowded you couldn’t see what you came to see, but this Carlton-House visit was literally a crush!

Hope you all are enjoying your summer and I also hope no one trods on you!