I will begin with this confession: whatever I have done in the course of my life, whether it be good or evil, has been done freely; I am a free agent… My success and my misfortunes, the bright and the dark days I have gone through, everything has proved to me that in this world, either physical or moral, good comes out of evil just as well as evil comes out of good.
Casanova, foreword to his Memoirs 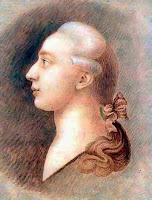 It’s the anniversary of the death of Casanova (Giacomo Girolamo Casanova de Seingalt) born in Venice, April 2, 1725, died June 4, 1798 in Prague. His name is synonymous with the archetypal male lover/seducer, but who was he really?

He’s a fascinating complex figure, full of contradictions and immensely talented and restless. In addition to the amorous activities for which he’s best known, he was also a preacher, philosopher, occultist, diplomat, soldier, spy, writer, author, librarian, and jailbreaker. He wrote extensive Memoirs but admits that he may not be altogether truthful–however, the Memoirs give a brilliant picture of life in eighteenth-century Europe. He has all the prejudices of a man of his times yet he has a remarkably modern voice. 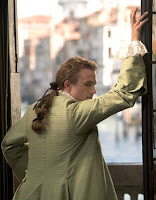 His adventurous, sexy life has been a favorite among film-makers, with a version starring the late Heath Ledger, and a BBC version with David Tennant (David who? Yes, that guy).

Fellini made a strange (which really goes without saying), stylized movie in 1976 starring a young and exotic Donald Sutherland, that perfectly captures Casanova’s sexual ambivalence and cool detachment. 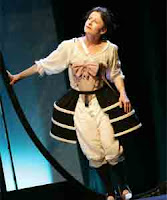 And, yes, Casanova apparently did like to cross-dress now and again. (Well, honestly, what did you expect?) Carol Ann Duffy, the UK’s first woman poet laureate, went a step further with her 2007 play in which Casanova is actually a woman. The Guardian reported: It is not sex but looks, food, music and language that are the agents of seduction. This Casanova gives everyone she meets their heart’s desire: Voltaire gets his ideas from her; Mozart gets music; and even a raging bull becomes as docile as a kitten when it looks into Casanova’s eyes. Hmm. 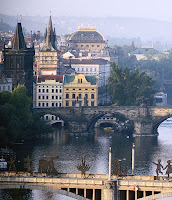 And talking of Mozart, yes, they did meet, along with librettist Lorenzo da Ponte when they were in Prague for the creation and premiere of Don Giovanni (1787). Casanova was an advisor for the libretto and part of the libretto exists in Casanova’s hand. Da Ponte, a former priest with a penchant for married women (I don’t think I’ve blogged yet about da Ponte, another fascinating character, but I will do so sometime soon) didn’t really need much advising in bedchamber matters. Another story: when da Ponte met Casanova another time, he was so embarrassed by his marriage and subsequent fall into respectability that he introduced his wife to the aging rake as his mistress. (The trouble is that although da Ponte and Casanova both wrote memoirs they are equally unreliable.) 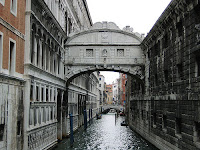 Casanova was the only prisoner to escape from the Doge of Venice’s notorious prison, which was accessed by the Bridge of Sighs, a gorgeous entrance to a human roach motel (you went in but you didn’t come out). That was probably true.

Have you tackled the Memoirs?–the prison escape is riveting, and Casanova rivets over 120 women in loving, pervy detail. Not to everyone’s tastes… Which movie of Casanova is your favorite?