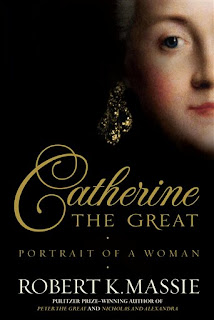 Happy Tuesday, everyone! I just realized that it is Tuesday. I got back from a weekend trip to Santa Fe late last night, and this morning rolled out of bed and went to see what was going on with the Riskies today….

On my trip, I started reading one of my birthday gifts, Robert K Massie’s new biography of Catherine the Great. I love Massie’s work–his Nicholas and Alexandra was what got me interested in Russian history in the first place, when I read it years ago, and this book was no less fascinating. Massie has the gift of making history come alive and feel immediate and real, and in the coomplicated, fascinating figure of Catherine he has the perfect subject.

Catherine was born Princess Sophia Fredericka Augusta of Anhalt-Zerbst, the daughter of a minor German princeling who had not much money or influence. But her mother’s brother had been engaged to Empress Elizabeth of Russia before dying on the eve of the wedding, and Elizabeth (an equally complex character!) had fond memories of him. Plus she wanted a young girl she could control who could give Russia an heir. She brought Sophia to Russia and married her to her nephew Grand Duke Peter, a disfigured, alcoholic obesessed with the Prussian military (a complete wackjob, in other words). But after years and years of a painful marriage, loneliness, and virtual imprisonment (which luckily gave her much time to read and plan) Catherine overthrew her deeply unpopular husband in a coup d’etat and became Empress in her own right. She reigned from 1762–1792.

Among other achivements, Catherine added 200,000 square miles to Russian territory (mostly at the expense of the Turks and the Poles), was a patron of the arts, literature, and education (she corresponded with French philosophes like Voltaire and Diderot, whose libraries she eventually purchased), opened the Smolny Institute to educate girls, wrote the “Nazna” (a code of laws), and tried to impose Enlightenment ideas on her vast empire (with mixed results). She also had at least 12 lovers, including the vastly gifted Gregory Potemkin. As she got older they got younger and dumber (the last of them, Zubov, was 40 years her junior)….

For more info on her complicated life, look here…

What have you been reading lately??? What books have sparked a love of history and historical heroines in your life?