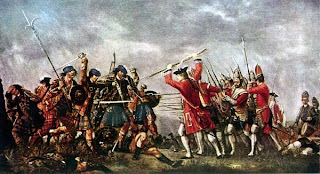 Today marks the 266th anniversary of the Battle of Culloden, the last pitched battle to be fought on British soil and the battle that ended the Jacobite Rebellion of 1745.

In 1745 Bonnie Prince Charlie gathered forces from Ireland, the Highlands and Lowlands to fight for the restoration of the English monarchy to the Stuarts. His forces, exhausted from a long march and short on rations met those of the Duke of Cumberland on the Culloden Moor on April 16, 1746. The battle was bloody and short, lasting only an hour. The Jacobite forces were decimated, the wounded slaughtered, and the survivors hunted down, imprisoned and executed. This harsh treatment of the enemy earned the Duke of Cumberland the name of “The Butcher.”

Bonnie Prince Charlie was pursued throughout Scotland with a price on his head of £30,000, but he managed to escape and make his way back to France. Subsequent to the battle, efforts were made to break up the clan system and highland dress was forbidden. 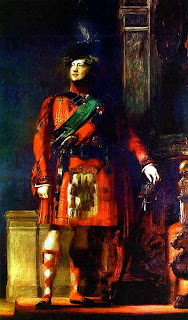 Ironically, it was a visit by George IV in 1822 that would restore a sense of Scottish identity and unify the Highlanders and Lowlanders in the common symbol of the kilt and tartan.

During the Regency there would still be a few people alive who endured the battle first-hand and others whose grandparents or parents were alive then. I wonder what the Regency era aristocracy knew of the battle. Did they think of it as we might WWII? What did the Scots think? Did they harbor resentment for what happened 60 years before?

I suspect for the Scots, emotions about the battle still ran high. A few years ago I mentioned to two friends of mine, both of Scottish descent and both writing Scottish Historicals, that my great great paternal grandmother was a Campbell. Well, this did not impress them at all. It turns out that the Campbells fought on the English side of the Battle of Culloden. My friends still considered them traitors.

What do you think Regency era Englishmen and Scots thought about each other and about the battle?

(Take a peek at my new bookcover and enter my website contest!)