Last week, during flooding in my local area, I ended up living several days essentially on an island. I live up on a hill, but the main road at the bottom of the neighborhood was closed, the power was out a conserve-and-boil-water order was in effect. My children and I talked about earlier days when no one had electricity, TV, etc… I toyed with the notion of whether this was giving me a taste of Regency life, but quickly rejected it. 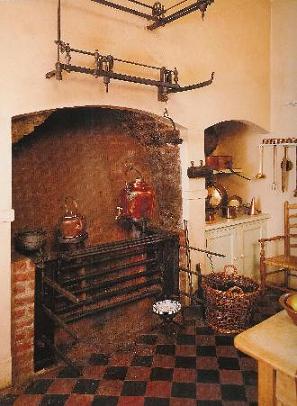 As we figured out ways to cook everything on a barbecue grill, I realized that in the Regency we would have had a wood, or more likely, coal-burning stove of some sort, as pictured here (the kitchen at Pickford’s House, Friar Gate, Derby, built after 1812). More importantly, I (or more likely, my cook-let’s keep it a proper Regency fantasy) would know how to use it. Instead of worrying about the food in the fridge and freezer spoiling, we’d have cellars or get fresh stuff from the home farm or local market. 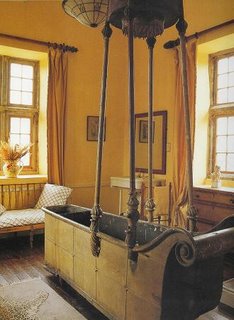 As far as personal hygiene was concerned, in my Regency fantasy I’d have a nice avante-garde bathroom such as the ‘bamboo bathroom’ at Plas Tag in Wales. The bath includes a shower with its own coal-fired water supply. Of course, I’d also have the means and the servants to bathe daily, as Beau Brummell is supposed to have done.

Inconveniences aside, the most striking thing was the feeling of isolation. We had only the radio to keep us advised as to the situation. Up on out hill everything was almost surreally normal–kids played outside, I did some gardening, lots of people were out grilling. It was just very quiet with no one driving in and out. Without the visual images on TV or a storm of Internet news, it was hard to grasp the extent of the devastation in lower areas. As it turns out, we were very lucky compared to some. Fortunately, there were very few fatalities in our area, but many people’s houses and businesses have sustained serious damage.

Anyway, after a few days of isolation, we learned that a somewhat roundabout, country road way of getting out of our neighborhood had opened up. We were expecting houseguests coming from Chicago, but they called, telling us the western routes to our town were still closed, so we arranged to meet them further to the north. We ending up “roughing it” together in a Fairfield Inn, conveniently located close to a children’s museum, a zoo, restaurants and boasting a pool. What I enjoyed the most, though, were the hot showers and hot coffee each morning. The best thing was getting home to find the power back on ahead of NYSEG predictions, our pet fish still alive and only moderately unpleasant smells from the fridge.

So I’ll admit it. I’m a wimp, I like my modern comforts and my Regency fantasy has to include all the most up-to-date conveniences of the time. And many, many servants. 🙂

Hope all my Risky friends and guests are safe and reasonably dry!