Yes, I’m at it again with the birds. It’s one of my many favorite nature subjects and—for me—a Mother’s Day thing. Our local nature center, the Waterman Center, often has a birds of prey demonstration on or near Mother’s Day.

Yesterday, we went to see a show presented by Jonathan Wood of the Raptor Project. Wood rehabilitates injured raptors and has a traveling show featuring an amazing collection of eagles, hawks, falcons and owls. 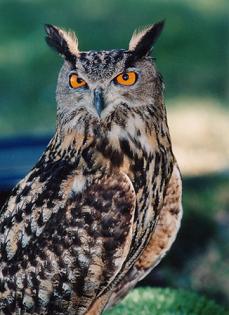 Some of the birds are in his “employment of the handicapped” program, having permanent injuries that prevent their release into the wild. But even with injuries, they can generate quite a bit of excitement during his shows. Yesterday, we were buzzed by a golden eagle (pictured above with Wood), a peregrine falcon and a snowy owl, among others. We also got to ooh and ah over a gawky/cute three-week-old falcon chick.

Here are some of the breeds Wood has shown that might appear in a European-set historical romance.

The Eurasian Eagle Owl is the largest owl in the world. Having seen it, I can believe the rumors that it can carry off small house pets. Check out the amazing orange eyes! 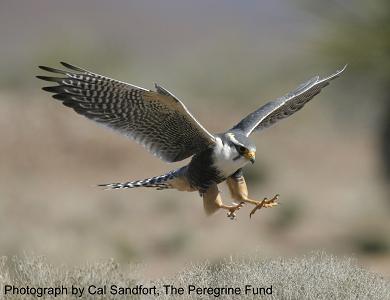 The Peregrine falcon has been used in falconry for many centuries, and is the fastest bird on record, capable of almost 70 mph in horizontal flight and a stunning 200+ mph in a dive. This picture is by Cal Sandfort at the Peregrine Fund. 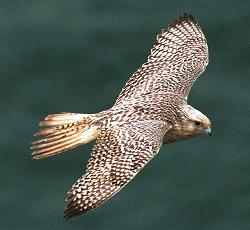 One bird that I didn’t see yesterday, but Wood has brought in the past, is the arctic gyrfalcon. When I saw it, I almost squealed in delight, for this bird, the largest true falcon, is the mascot animal in Laura Kinsale’s FOR MY LADY’S HEART. Gyrfalcons continue to be rare and valuable; according to Wood, they have sold for up to six figures!

Someday I want to learn more about the sport of falconry. Although not the most popular sport during the Regency, it was practiced, and it would be fun to include one of these beautiful birds in a story. FOR MY LADY’S HEART (set in the 14th century) is the only romance in which I can remember reading about falconry. There are probably more than that. Does anyone know of others?

In any case, be sure to check out a Raptor Project show if it ever comes your way. And happy Mother’s Day!