Tag Archives: Fashion: A History from the 18th to the 20th Century

No, I am not reviewing one of my fellow Risky Regency bloggers’ books–that wouldn’t be risky, would it?
Instead, I thought I’d write about a book I received from my dad, the Enthusiastic Bibliophile, as a birthday gift (note: my birthday was in August, but my dad just sent this. A Timely Enthusiastic Bibliophile he is not).
Anyway. For anyone who’s gotten interested in the Regency period because of the clothing (Amanda? Cara? And I bet the rest of us, too), this is a find. The book is titled Fashion: A History from the 18th to the 20 Century, and it is drool-worthy.

Before even opening the book, let’s talk about the presentation. Taschen, a company that’s produced many coolly chic coffee table books, produced this version of the book which costs a lot less than it did in previous editions–follow the link here to get the details. The book is compiled and collected by the Kyoto Costume Institute, which takes its show on the road to museums near you.

The volumes are soft-cover, but are contained within their own little holder, and the cover is just gorgeous. You can see it above, but to see it live is much more impressive. 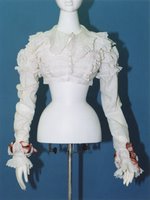 Then open the book. Volume 1, which is the volume relevant to us: 18th and 19th Century Fashion. Ohmyword. The pictures are huge, clear, and have succinct descriptions, with dates, to give you a clue about what you’re seeing. And you really SEE the clothes here, not just a little tiny picture pulled from some period magazine that doesn’t give you the FEEL of the clothes.

There are men’s and women’s fashions here, and you can track the gradual changes in fashion through the ages. The pictures I’ve posted here are primarily from 1810, although the reticule is 1815. The black outfit is a riding habit–imagine a heroine wearing that as she’s trying to beat the hero in a neck-or-nothing race. The red coat is a redingote, an outer garment that would doubtless keep the heroine (and her muslin gown) free of drafts when she was outside. 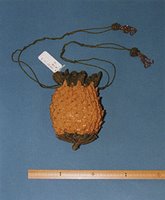 And in case you thought the current trend for short shrugs was just this century, take a look at the white jacket above–that is as short as anything I’ve seen in Mandee’s lately.
I haven’t spent a lot of time with this fabulous two-volume set yet, but I will be (thanks, Dad!), as much because I am a fan of fashion as I am of the Regency period. Just like our own books (you knew I’d get back there eventually, right?), the Fashion: A History from the 18th to the 20th Century books make the period come alive.

Something to look at when I’m wondering just which pair of jeans to don. What was your favorite period for women’s clothing? And is it because your figure is more suited to that style, or for more altruistic aesthetics?