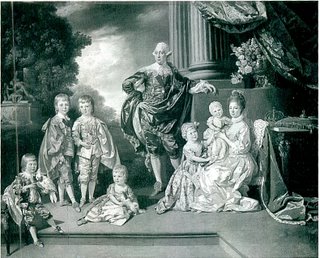 So, tomorrow is Father’s Day, and I still haven’t found a gift for my dad. He is the hardest person in the world to shop for–he already owns every electronic gizmo there is, plus every DVD and CD he might want he’s already bought for himself. I wonder if people in the Regency had this problem? Oh, yeah–they didn’t HAVE Father’s Day then. Lucky them. 🙂

Besides scanning the Internet for possible gifts, I’ve been trying to decide on a good theme for this post. In college, I once wrote a paper on fathers and daughters in Shakespeare. To borrow from that idea, here is a selection of fathers from Jane Austen:

From Mansfield Park, there is the uncle/father figure Sir Thomas Bertram. Now, he benevolently takes Fanny in and raises her alongside his own offspring, but Sir Thomas is really pretty distant in her life, a fearsome figure of authority. He is not outwardly affectionate, and is definitely highly concerned with outward appearances, but in the end he does acknowledge that he should have really spent more time overseeing his children and not left them to his lax wife and crazy Mrs. Norris.

From Pride and Prejudice, of course there is Mr. Bennet. He spends most of his time reading and hiding out in his study, which really who can blame him, but he also comes across as a bit careless to his family’s ultimate fate. With Elizabeth he is concerned and loving, but with his three younger daughters he lumps them together as the “silliest girls in England” (and again, who can totally argue with him?)

From Sense and Sensibility, I guess you can say there is Mr. Dahswood, who dies at the beginning. Yet it appears he loves his wife and daughters and wants to provide for them, hence he makes his son promise to take care of them. That the son breaks that promise isn’t really his fault, I guess…

From Emma, there is Mr. Woodhouse, the invalid. It’s said “she loved her father, but he was no companion to her.” He sees no fault in his daughter, and they spend a comfortable life together indulging each other in their whims and self-delusions.

From Northanger Abbey, we see Mr. Morland, a respectable, well-enough-off clergyman, with “considerable independence, besides two good livings.” But he is not much of a presence, probably because he has two livings and ten children. His wife appears equally distracted, leaving Catherine lots of time to do stuff like roll down hills and read horrid novels.

There is also General Tilney. He is very wealth-obsessed, boasting, annoying, and preoccupied with himself (when not meddling in his children’s lives). I sometimes wonder how Catherine is going to handle having him for an in-law…

And, from Persuasion, Sir Walter Elliott. He spends all his time reading the peerage and probably looking in the mirror. He loves his daughter Elizabeth, who is like a reflection of him in female form, but is quite indifferent to Anne and probably to Mary. “Vanity was the beginning and end of his character.”

And that is my thumbnail sketch of fathers to be found in Austen. They’re kind of a pitiful lot when looked at like that, aren’t they? 🙂 I thought of many other things that could go into this post–fathers in romance novels, fathers in the real-life Regency (btw, the picture is George III, Queen Charlotte, and their Six Eldest Children by Johann Zoffany. Thanks for the tips on uploading pics to Blogger!). But I really do need to get to the shops and find a gift for my own dad, who luckily is no Mr. Elliott or General Tilney. What are some of your favorite examples of fathers in books or histories? Or comments on Austen fathers, either fictional or Rev. Austen himself?