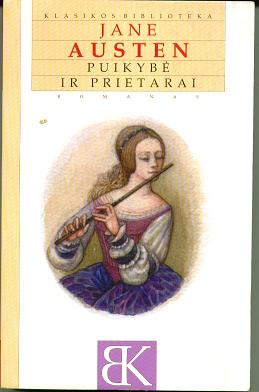 Don’t worry, this is still Risky Regencies and you have not been transported to some strange country.

Or only a bit strange—they have, at least, heard of Jane Austen. They even quite cleverly translated the title to keep the alliteration. This is Pride and Prejudice, a copy my mother brought back from her twice-annual trip to Lithuania.

Both my parents emigrated from Lithuania as children. Though I was born in the U.S., my first language was Lithuanian. In fact, I went to kindergarten knowing very little English. Perhaps not the smoothest way to integrate a child into a “new” country, but somehow I managed. I know that growing up bilingual has made other languages (perhaps even computer languages) easier. Still, I sometimes wonder if I can blame my occasional awkwardness with word choices and phrasing on this early linguistic confusion. Or maybe not. Maybe I’m just the Queen of Awkward Sentences, doomed to seemingly eternal revisions. 🙂

Anyway, I find this book and its packaging quite interesting. Though the title is clever the cover art is many centuries off. One would think they could have found something more appropriate. At least it’s not Victorian!

I read the back blurb, and was surprised to see that they gave the entire plot in a nutshell, spoilers and all. If, that is, there is such a thing as a spoiler for a book that’s been around since 1813.

Overall, it makes me happy people all over the globe can enjoy Jane’s genius. I wonder how she would feel about seeing her works in so many translations? Have any of you run across any other interesting translations? What have your experiences been with foreign languages? How do they affect your reading and writing?

Elena, hoping someday there will be Lithuanian editions of her own works
www.elenagreene.com
LADY DEARING’S MASQUERADE, an RT Reviewers’ Choice Award nominee