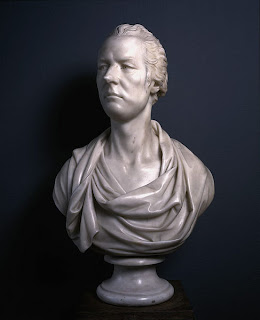 Pitt became the youngest Prime Minister of Great Britain in 1783 at the age of 24, finally accepting the post after King George III had urged it on him three times. He was ridiculed for his youth, even in a popular ditty of the period that called Great Britain, “a kingdom trusted to a schoolboy’s care.”

He replaced Charles James Fox, whom the king detested and who became Pitt’s lifelong political rival. Pitt resigned the office in 1801 when he clashed with the king over Catholic Emancipation.

Pitt became Prime Minister again in 1804, a stressful time due to the rise of Napoleon in France, and Fox’s continued opposition.

Pitt, who had suffered from bouts of ill health since childhood, became ill in 1806. He died on this date in 1806, probably from peptic ulceration of the stomach. Pitt never married.

Parliament passed a bill to pay Pitt’s debts and to honor him with a public funeral and a monument. It passed easily, although Fox opposed it. Pitt was buried in Westminster Abbey.

When I went on the Regency Tour in 2003, we visited countless country houses of the Regency period. In almost all of them a bust of Pitt was displayed.

When I discussed Sir John Moore last week, I mentioned that he sent his regards to that intrepid traveller, Lady Hester Stanhope, whom it was thought he would have married had he lived. Well, Lady Hester Stanhope was William Pitt’s niece. She designed his gardens and acted as his hostess for a time.

Do you have any interesting connections like that? Like knowing someone in one part of your life who also is connected to someone in another part of your life? For example, my husband, a government computer guy took a training class recently and sat next to someone, not in the government, who was an employee of my friend Pam Palmer’s husband. I’m not sure how, in a computer training, they got to talking about romance novels….