This is the day (third Monday in February) that we in the US celebrate our two greatest Presidents, George Washington and Abraham Lincoln, with a Federal holiday. The holiday used to take place on February 22, which was Washington’s birthday, but in 1971, it was combined with Lincoln’s birthday, Feb 12. Lincoln’s birthday used to be noted, especially in school lessons, but we didn’t get off work.

By combining the celebration of the two birthdays into one Monday holiday, we got a three day weekend and a perfect time for stores to offer great sales. We also improved the opportunities to hold formal celebrations of the Presidents themselves. 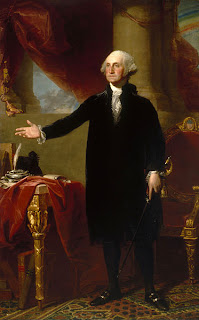 One wonders what people in the Regency thought of George Washington, who by then was a memory, having died in 1799. The British people had two close examples of populous rebellion, the American and French Revolutions, and both were still coloring their lives with the Napoleonic war and the War of 1812.

Napoleon and George Washington had two different takes on leadership.

Napoleon seized power whenever and wherever he could, declaring himself Emperor and invading other European countries. There was no doubt in the people’s minds that Napoleon wanted to conquer Great Britain, too.

Washington, on the other hand, provided a model of refusing power. Even though he had promised to resign his commission as Commander of the Continental Army at the war’s end, there were several of his generals who had pleaded with him to seize civilian power and declare himself king. He discouraged the Newburgh Conspirators from attempting a coup de tat. He refused a third term as President.

Mason Locke Weems, the first biographer of Washington, wrote of why Washington was greater than George III or Napoleon or other leaders. His The Life of George Washington was the best-selling book in the USA for 100 years, second only to the bible. Of course, several of the incidents related in Weems’s book are known to be fabrications even though some achieved the status of legend, like the story of the cherry tree in which the boy George tells his father, “I cannot tell a lie. I cut down the cherry tree.” 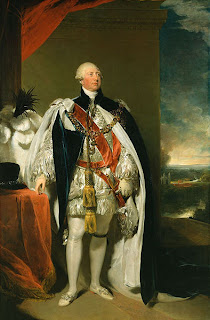 When hearing that Washington intended to resign his commission after the war instead of seizing control of the new nation, George III said to artist Benjamin West, “If he (Washington) does that, he will be the greatest man in the world.”

Napoleon seemed to agree, although in a characteristically competitive way. He said, “Posterity will talk of Washington as the founder of a great empire, when my name shall be lost in the vortex of revolution.”

Lord Byron contrasts Napoleon and Washington in his Ode To Napoleon, written after Napoleon’s defeat.

Of Napoleon he begins:

‘Tis done—but yesterday a King!And armed with Kings to strive—And now thou art a nameless thing

Near the end of the poem, he mentions Washington:

Where may the wearied eye reposeWhen gazing on the Great;Where neither guilty glory glows,Nor despicable state?Yes—One—the first—the last—the best—The Cincinnatus of the West,Whom Envy dared not hate,Bequeathed the name of Washington,To make man blush there was but one!