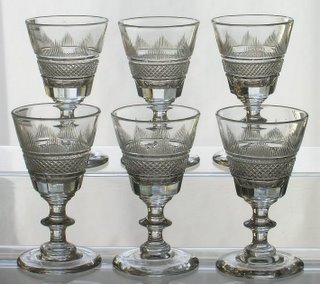 An Englishman liked his drink. Gin, rum, and brandy was the ordinary fare, found in pubs and taverns across England. One could not trust the water, after all, and water did not rouse the spirits half so well.

Gentlemen had to be more particular in their choice of drink–good wines and spirits did for him–although I imagine the effect was the same.

I thought it would be interesting to see some examples of the serveware that would have been used. Above is an example of six sherry or port glasses circa 1810 and at the left is a wine glass circa 1750–that is, if it is not an ale flute–I’m not quite sure of that, but it looks like a wine glass to me. 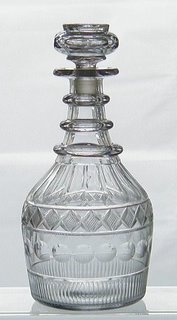 Following first is a decanter circa 1820. The quality seems quite fine; I expected to find more irregularities in the glass when I began this search, but it seems that there is quite a variety, I
suppose depending on the maker and the market the piece was intended for.

Next is a very nice etched wine glass 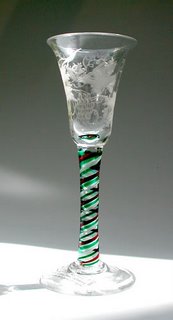 circa 1770 with a very inter-esting swirled stem. You may notice that the bowl is not very big; in formal dinners where there might be numerous toasts, one could not get “potted” after the first two.

Finally, there is a pair of cobalt decanters marked “rum” and “brandy” (1790) 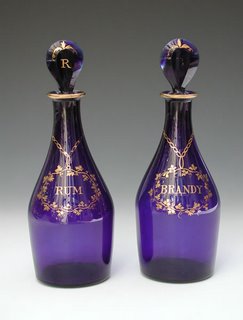 and a “rummer”–a rum glass of which it 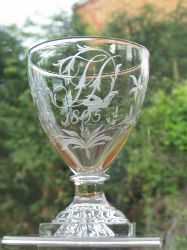 seems many have survived, since I found quite a few examples for sale on the internet.

Armed with this information, as little as it is, you can at least imagine what a gentleman might have thrown at his grate at the end of a rousing toast…or perhaps, in a fit of temper!

Glass enthusiasts–I am a novice in this arena and would love your input!