Gorgons and Hydra’s, and Chimera’s dire 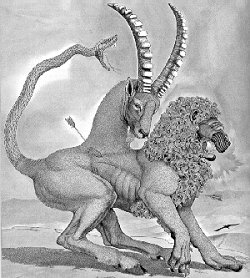 I am reading Paradise Lost (from which the title line is a quote) and enjoying many of the ideas in it, along with the erratic spelling and punctuation. Things like “smoak” for “smoke” and the use of apostrophes for pluralizing certain words. And Milton isn’t even consistent within his own work, as in the phrase I quoted. I’ll forgive Milton anyway! In the 17th century English certainly wasn’t as standardized as it is now.

But what’s our excuse? Here are a few notices I’ve seen while running errands over the past month:

“Attention, Patient’s. The office will now be open on Monday’s and Wednesday’s….”

“Parking for ACS Customer’s Only”

I have even (gasp) read notices from teachers to the effect, “Parent’s, please have your children bring a bag lunch on the day of the field trip.”

Apostrophes are used to make plurals ONLY in very specific cases. The rule used to be that they were used to pluralize acronyms, numbers and letters, but the most recent guides say they should only be used with lower-case letters. I won’t freak if someone writes “ABC’s” or “1990’s” since these are common forms and recommended in older style guides. I’ve probably used them myself, so anyone who freaks about them is obviously taking things too far. 🙂

But for every other plural, please stop the madness! Save the apostrophes!!!!

OK, the heat has addled my brain. But I think I was upset about this even before the heat wave. Do you have any grammar and punctuation pet peeves? What are they?