Sorry about this. I thought I’d take a look and see what was up at the Riskies, lateish in the afternoon, and realized it was Thursday, my day to blog. It doesn’t feel like a Thursday, you see. I’m at work…

So here’s a recycled post from a couple years ago which raised some interesting discussions then and might yet do so again. And next week, absolutely new content, I promise–an interview with a vampire. 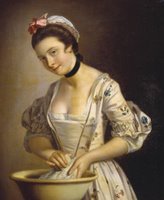 Or, you might go into service. Here’s another amazing statistic: in the eighteenth century, one-third of all the population (with the exception of the aristocracy) was in service at some time in their lives—usually until their mid-twenties. About one-third of London’s population was servants. Some people, working in the houses of the rich, rose in the ranks to enter the servant elite as butler, housekeeper, or lady’s maid; even though this illustration is from the mid-eighteenth century, you can see how well-dressed this lady’s maid is. Servants earned room and board, plus “perks”—for a ladies maid or valet, cast-off clothing they could wear or sell—or “vails,” tips from visitors usually given to footmen.