I have heard the mermaids singing 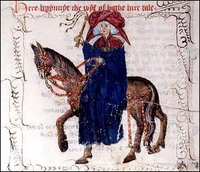 My post today is inspired by Elena’s topic yesterday about digging deeper into Prinnyland and it’s also something that’s been on my mind for a time. With no exceptions, everyone who wrote to me about Dedication said how much they liked the older hero/heroine—people seemed to love the idea of a pair of lovers who’d been around the block. And it got me thinking about how fiction treats the, ahem, older generation. The pic here is of the Wife of Bath. I’m not sure how old she was, but the average age during Chaucer’s time, thanks to warfare, the plague, and other rigors of medieval life, was in the early twenties. Aargh. Imagine a world where major decisions were made by fratboys.

First to Emma, where Mr. Woodhouse is described as being not old in years, but embracing the role of elderly hypochondriac with passion. Emma is twenty-one. So is my daughter. Mr. Woodhouse could be younger than me. Oh. My. God. (as we say in blogland). Now certainly, for women at that time, if by a certain age you hadn’t snapped up a husband, you threw in the towel, grabbed an unbecoming spinster’s cap and descended into middle age—just like Miss Bates. And, as I’ve mentioned before, Miss Bates could be the same age, or younger, than Mr. Knightley, who because he is male and rich is far above her on the status scale. Mr. Knightley’s single state is admired, not despised, because it’s seen as an act of generosity toward the nephew who will inherit his estate.

In Mrs. Gaskell’s Cranford Miss Matty is described as an old lady. She is fifty-five. No comment. Again, she’s damned by gender, income and circumstances.

So how do older people fare in romance? As you’ve gathered by now I’m not that well read in the genre. I appreciate that we don’t want to read about sagging flesh, wrinkles, gray hair etc. etc. But Sean Connery gets just, well, hotter as he ages (note extraneous pic of Mr. Connery in his prime). I once pointed out to someone in a critique group that her heroine’s wise, loving, cookie-baking, homely mom came of age during Woodstock. (Was there a special ingredient in the cookies to provide the appropriate feelgood warmth of category romance?)

A big hand to my friend Stephanie Feagan whose heroine (named Pink) has a 50-something mom who sports sexy black bras and has trouble with her A/C—the A/C repairman visits. A lot.

Prinnyland, as I remember it, is full of gracious, loving matriarchs who obsess with planning their offsprings’ lavish weddings—strange in an age where most weddings took place in the drawing room and took about ten minutes as far as I can tell. Fathers are too often dead, or if alive, embarrassing (if not to the heroine, certainly to the reader) buffoons, who invariably have screwed up the family finances or have expensive and eccentric hobbies. There also seem to be far too many Lady Bracknell knock-offs. Please, set me straight. Tell me about the many, many exceptions. Where are the hot, older men? And hot, older women?

Oh, and my next book has a subplot featuring the hero’s widowed mom and her wild fling. Her eldest son is thirty. Do the math.