I’ll tell you about the contests at the end of this post, so keep reading.

I’ve decided to rewrite something that was set vaguely in the late 18th century (a period I find much more interesting than the Regency proper with all it froufy dresses. Is froufy a word? I guess it is now) and set it in an imaginary world. I want to keep some of the elements of the imaginary world we have already created in the Regency, so here is my Top Ten Recyclables of History: 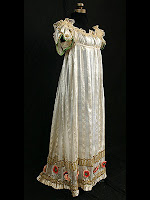 2. Battling superpowers because this makes for good conflict if Country A is about to declare war on Country B at any moment for the flimsiest of reasons.

3. Men have the power but women get the last laugh.

4. Great cities with universities and cathedrals.

5. A huge emphasis on manners and propriety beneath which buzzes wild passions and politics.

6. A changing social order where you can slip and slide from wealth to poverty and back again.

7. The beginnings of change with the use of steam and scientific enquiry.

10. Tight pants for guys. I’m sure this is something you don’t need a pic for because it’s already imprinted on your brain but I’m giving you one anyway. This is Napoleon, looking less short and fat than usual, and heavens, could that boy fill out a pair of pants, in the artist’s imagination at least. Maybe he was keeping a spare handkerchief, or battalion, or something there. (This is what happens when you do a search on google images for regency tight pants. Go on. Try it.)

So now it seems the question is what else do I need to make this a convincing world that is like Europe and the Near East in the late eighteenth century but different? Nope, no dragons or other paranormal elements. What would convince you? Or what have I missed out that you’d like to see?

I’m thrilled to offer an eARC of Julie Anne Long‘s next release A NOTORIOUS COUNTESS CONFESSES which comes out at the end of October. It sounds fabulous. So help me build my imaginary neo-Georgian world, or just stop by and say hello or whatever,  and your comment or question will enter you into a drawing. The usual restrictions apply. Contest ends tonight at midnight, EST.

And you can also hop on over to Goodreads to enter to win a signed copy (recycled tree product) of HIDDEN PARADISE which is being released in about a month’s time.

This was made on iMovie which comes with the standard Mac bundle of software and it’s an extremely nifty little program. All sorts of visual effects and you can fade music in and out and I recorded  the voiceover with the puter’s inbuilt mic when the guys next door weren’t using their power tools.

You can read an exclusive excerpt on Heroes & Heartbreakers and learn more about my inspiration for the book at the RT Daily Blog.

And the Top Ten Reasons to buy the book:

10. There’s stuff about Jane Austen in it. Really. (As well as the sex.)
9. There’s a lot of stuff about paint analysis (well, it floats my boat).
8. People dress up in Regency clothes (and have sex).
7. They eat authentic Regency food (and have sex of no particular historical period).
6. There’s horseback riding and boxing (and … you know).
5. Also country dancing (and, you guessed it).
4. Glimpses of downstairs life among the team of hot footmen (no, not like that, though probably it should have been, but you do get that elsewhere).
3. It’s funny sometimes (even during the sex. Did we mention the sex yet? Oh yes, we did).
2. And sometimes it’s sad (by the way, did I tell you that…)
1. Because you know you want it real bad.

And now the contest: I’m giving away two signed copies (US only) if you enter with a coherent sentence about … just about anything, and I’ll pick names and announce on Sunday. So if you’re not planning to visit on Sunday, leave an emasculated version of your email, eg riskies at yahoodotcom so I can contact you. Usual restrictions apply.

Last night I went to sleep knowing exactly what I was going to blog about today.

When I woke up this morning, the idea had gone entirely. Now, I knew this would happen. It’s happened so often. What I should have done was get up there and then and create the post, or at least scribbled the idea down on a piece of paper. If I’d been mid book and fallen asleep thinking about the book and forced myself out of bed to write it, it probably would have been something pretty darn good.

So where do ideas come from? Who knows. But there are certain tricks and techniques that can help so today, I thought we’d play a game. I grabbed a few items from my office (and you have to understand that my office is rich pickings at the moment. We are doing major work to the downstairs of our house and so everything is in boxes everywhere else. I can just about get into my office and sit at my desk). So here’s my impromptu still life–a shell, a bowl, a string of beads, and two pics, one a portrait by Elizabeth Vigee-Lebrun and the other an illustration of the cat who walks by himself by Rudyard Kipling. And it’s not just for writers: comment anyway, because you might surprise yourself and you don’t have to include every item. 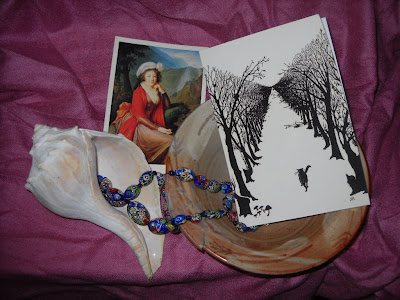 Tell me what these suggest to you.
What is the relationship between (all or some of) the items, how do they fit together?

THE PRIZE: Yes, there is a prize. A copy of my brand new release HIDDEN PARADISE, a sexy contemporary which has lots of sex and stuff about paint analysis and Regency clothes (on and off). It’s not coming out until the end of September and I have just received a big box of author copies (US residents only, must be over 18 and not related to me and all the usual stuff). You can comment here or on my FB author page Janet Mullany, Author. Let me know if you tweet it too, for extra points!

I’m also doing a blog tour for THE MALORIE PHOENIX, stopping today at MK McClintock’s Blog  and The Bunny’s Review. You can see all the blog stops here at Goddess Fish. Feel free to drop in and comment on earlier stops too. The prize is a $20 Amazon gift certificate.

So have fun and frolic online. Winners announced on Sunday July 22.