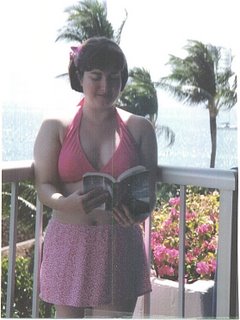 At, first, this week’s assignment confused me. Were we supposed to write about what we’re actually reading this summer, or what we woud take with us to our mythical private Risky Regency Beach. (Oooh, I bet that would be a fab place. Piles of books everywhere, buckets of champagne, trays of strawberry-dipped chocolates and mangoes. Cabana boys named Clive and Gerard and Orlando and Sean…)

Ahem. I digress. Okay, so I turned this into a two-section thing: what I am reading right now, this week, for my summer enjoyment, and what I would put in my bag to take to our lovely RR beach. And let Orlando read to me while he feeds me grapes…

Books I am Currently Reading: (and these could go to the beach, too–I’m certainly not averse to hauling a massive hardback biography across the sands if I have to!)

1) Bess of Hardwick: Empire Builder by Mary S. Lovell, who also wrote the riveting book The Sisters about the wildly eccentric Mitford sisters. Actually, these could be companion studies of dysfunctional families through the ages! Bess was born into the “upper middle classes” of Tudor England, but rose, though 4 advantageous marriages and much wheeler-dealering to be the second most wealthy woman in England after the Queen. She built several grand properties, including most famously “Hardwick Hall, more glass than wall.” She was close to Elizabeth and her leading courtiers, and had much to do with Mary Queen of Scots (her fourth husband was Mary’s main jailer, a source of high tension and stress that eventually drove their marriage into acrimony and separation). The book is full of wild family squabbles, spectacular marital spats, and an intriguingly wide view of Tudor society. I love it, and will probably read Arbella: England’s Lost Queen when I finish (Arbella, the ultimate rebellious teenager, was Bess’ granddaughter and a serious claimant to the throne).

2) The other book I’m reading is Julia Childs memoir My Life in France. In 1949, she married and moved to France with her diplomatic service husband, thus having the chance to experience the glories of French food for the first time. She attended the Cordon Bleu, started working on a cookbook with some friends, and the rest is history. Gorgeous meals, beautiful scenery, the general joie de vivre of France–it’s delightful. I would have so loved to party with her and her husband!

And now, what I would pack in my beach bag (paperbacks, so a little lighter than the two above!)
A Singular Lady by Megan Frampton (the blue cover would go so well with the sea, and the chick lit at Almacks tone is perfect for a vacation)
Code of Love by Cheryl Sawyer (because it looks interesting–I’m a sucker for intellectual skullduggery like code-breaking)
Runaway Duke by Julie Anne Long (because I’m also a sucker for dukes who don’t wanna be dukes–like they have a choice, poor things. Snort. And because I enjoyed her first book)
Rebel Angels by Libba Bray (the sequel to A Great and Terrible Beauty, which I just finished and loved. Historical paranormal YA, where the fate of the world and the Realms rests on the shoulders of a gaggle of Victorian 16-year-olds. Loved it!)

And that’s it, my vacation book list. Until I start adding to it. And BTW, the pic is one of the very few you will ever find of me in a swimsuit. Someone snuck up on me as I was reading on the hotel lanai in Hawaii. The last bikini pic of me was when I was 3 and had a flashy gold lame creation to wear in my wading pool… 🙂