A Word from Lady Cordelia 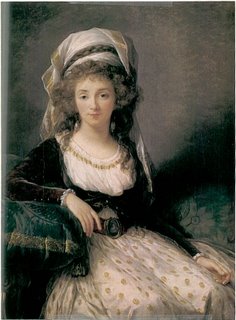 I have read with great interest my hostess’ recent missives on the life of a lady-in-waiting. (I have also been watching with equal interest the little irridescent circlets on the d-v-d machine while Miss McCabe is at what she calls her “job,” though I see little sign of something respectable like governessing. Some of these circlets purport to be living versions of Miss Austen’s delightful novels. I have much to say about them, though I will reserve commentary for a future letter). This missive concerns my own youthful days at Court, before I married my dear, departed husband. There is much time to muse on those delightful days now, as I still am residing in Miss McCabe’s rather untidy cottage. When she is gone, I cannot operate the rather mysterious contraptions here (and she became rather cross when I broke the whirling blades of the, um, blender. I only wanted one of those delightful fruit concoctions called smoothy-s, which are much like some of the sweets at Gunters, near where I once lived. Ah, but that is another tale. Anyway, how was I to know one must first remove pits from peaches?). Fortunately, there are many books to read (though some are quite shocking! Have you read a tome called “Dedication” by Miss Mullany?), and I have my memories to keep me company until I can discover the means to return to my own home.

When I was a young lady, my parents sent me to Court to serve as a maid-of-honor to dear Queen Charlotte (a most dignified and morally correct lady, no matter what might be said about her in less dignified circles. The young ladies in this incomprehensible twenty-first century could learn a great deal from Her Majesty’s sterling example. Why, my hostess actually goes about with men without a chaperone! But the less said about that…) My time at Court proved to be excellent preparation for my future life.

A typical day at my duties would run thus: I would rise at about six, and be summoned to the Queen’s dressing room at half past seven. The wardrobe women would already have completed the preliminary stages of Her Majesty’s toilette, and we would help her with the finishing touches. I would then return to my room for breakfast, attend to my correspondence, and perhaps take a short walk before attending to the Queen’s midday change of gown. This would often take two or three hours, leaving only a brief time before attending the Queen on her evening preparations and whatever events were scheduled for that night (a ball or concert, perhaps).

It is true that the hours were long and the rules many, and a few of my fellow Maids (whining wretches!) had little good to say about the great honor bestowed on them. Yet I met my dear husband at Court, and learned a great deal about honor and propriety which Certain People would do well to follow.

Now, I must go, for I hear my hostess’ strange horseless phaeton entering the strange stable she calls a garage. I have to ask her again how one operates the intriguing gadget that pours out coffee in such a neat little stream…

Last week, I started a new job. I think it will be all right, but right now I’m completely stressed out, trying to learn new computer databases, new procedures, and still find time to write at home! By coincidence, I’ve also been reading a book titled “Ladies-in-Waiting: From the Tudors to the Present Day” by Anne Somerset, detailing one of the few careers open to women (upper-class women, anyway) during the Regency–royal service.

Chapter Eight concerns the “Later Hanoverian Court”. In the summer of 1761, it was announced that the new king, George III, would marry his cousin Princess Charlotte of Mecklenburg-Strelitz. The king’s mentor, Lord Bute, was immediately bombarded with requests for places in her household for wives and daughters. On July 23, Horace Walpole wrote to Sir Horace Mann, “The new Queen’s family consists of…the Duchess of Ancaster, Mistress of the Robes and first lady of the Bedchamber; the others are the Duchess of Hamilton, Lady Effingham, Lady Northumberland, Lady Weymouth, and Lady Bolingbroke” (he missed one addition, Lady Egremont). The Countess of Dalkeith had angrily turned down a position when she heard she would have to work with the Duchess of Hamilton, who had been one of the famous Gunning sisters. The Duchess of Bedford was also insulted–she was left off the list altogether. The husbands of both these ladies soon went into Opposition. Coincidence? I think not. 🙂

Princess Charlotte herself had hoped to bring with her a large retinue from her own country, as royal brides had in the past (Catherine of Aragon, for example, brought many Spanish retainers with her when she married Prince Arthur Tudor). But the king decreed “the utmost she can bring is one or two femmes de chambre whom I own I hope will be quiet people, for by my own experience I have seen these women meddle more than they ought to do.” So, Charlotte brought two German ladies, Johanna Haggerdorn and Juliana Schwellenborg, who served as joint Keepers of the Robes. Haggerdorn proved to be ” a placid amiable ladylike woman”, but Schwellenborg was a different kettle of fish. In 1765, the king, irritated by her intrusiveness and arrogance, was only dissuaded from sending her home by the persistent entreaties of his wife! Among the other ladies she was seen as a petty tyrant. Novelist Fanny Burney, Haggerdorn’s successor, wrote that S. was “noxious and persecuting.” The Queen, however, adored her, calling her a “faithful and truly devoted…servant.”

Perhaps one reason for the queen’s dependence on S. was the fact that she was never really at ease with her sophisticated English ladies (and not encouraged to develop close friendships by her possessive husband!). The Duchess of Ancaster stayed at her post until her death, but in 1784 the queen fell out with the Duchess of Arrgyll (formerly Hamilton), who was flirtatious and unpunctual, as well as the mother of a scandalous daughter. The Countess of Northumberland (a “vulgar woman” who liked “show and crowds and junketing”) left way back in 1770. And Lady Bolingbroke had to leave when she and her husband divorced. I can’t imagine these ladies partiuclarly mourned leaving court (except for the chances for family advancement and prestige), as the king and queen were known to be deadly dull (until the king went crazy, that is!).

There are so many interesting things to say on this topic, I may have to continue next week! In the meantime, how do you think YOU would have fared as lady-in-waiting?

Since I found so much interesting info (interesting to me, anyway!) on the lives of Georgian ladies-in-waiting, I decided to do a Part Two this week, continuing from last Monday.

The Countess of Harcourt became a Lady of the Bedchamber to Queen Charlotte in 1784, and she also became one of the Queen’s few friends, staying with her until her (Charlotte’s) death in 1818. Lady H. recalled one occasion when she said to the Queen, “I should like to tell YOU something, but pray promise never to let the QUEEN know it.” The Queen laughed and answered, “Oh, no, SHE can have no business with what passes between us in our private unreserved conversation.” But these lighthearted moments were an exception in what was considered a very dull Court indeed.

The Queen would receive at Court only women of unblemished reputation, “proscribing from her society all females of bankrupt or even ambiguous character” (Anne Somerset, from “Ladies in Waiting”). I don’t think ladies of, shall we say, a more risky disposition could care too much about this exclusion. The Court was no longer a center of fashion, as it had once been, since the values espoused by the King and Queen were so far from those set by the leaders of fashion.

The Court was also bound by rigid, uncomfortable etiquette. Fanny Burney, the novelist and sometime lady-in-waiting, wrote after first visiting Court, “In the first place you must not cough…In the second place you must not sneeze. In the third place, you must not, upon any account, stir either hand or foot. If, by chance, a black pin runs into your head, you must not take it out. If the pain is very great you must be sure to bear it without wincing; if it brings the tears into your eyes, you must not wipe them off…”

Other rules include one forbidding anyone to initiate a conversation with the King or Queen, or to eat in their presence. Ladies could not leave the Queen’s presence of their own accord, and when they did leave they had to back smoothly out of the room (with a train!). No one could sit in the Queen’s presence, even if faint or pregnant.

Of course, their duties could have been worse. The Ladies of the Bedchamber didn’t have to wait on the Queen at meals or assist with her toilette, aside from ceremonial; duties such as fastening her necklace. There were six of these ladies, drawn from the highest reaches of Society, each on call for two months of the year, usually only for formal occasions. The more day-to-day duties were now divided between the two Keepers of the Robes and their assistants, the wardrobe women (a whole ‘nother article, I think!). Ladies of the Bedchamber were paid 500 pounds a year (rather unfairly, the hardworking Keepers got only 200, but they did have free accomadations). Though the King and Queen were always eager to reduce their domestic budget, the Queen, despite a reputation for parsimony, would never permit savings at the expense of her ladies. She even fought the Government’s efforts to reorganize financial arrangements in 1812, condemning their proposed cuts as “shabby.”

Now, last week I asked if YOU would make a good lady-in-waiting. This week I wonder would your own heroine (or the heroine of your favorite books) do well at Court? Or would they be too rebellious? 🙂