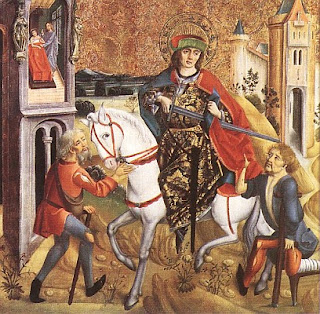 But November 11 is actually an older holiday, and rather an appropriate one, the feast day of St. Martin, patron saint of soldiers. The legend goes that he cut his soldier’s cloak to share with a dying beggar.

Martinmas was also traditionally the day on which hiring fairs were held, when servants sought new jobs, holding the symbol of their specialty–cooks held a wooden spoon, shepherds their crook, and female servants wore different colored aprons (e.g. for housemaid, nurserymaid). Hiring fairs were a great social occasion for servants, who, even if they were not looking for a new job, went to meet their friends and socialize, dance, and drink.

This was also the time of year when livestock was killed off for the winter and Advent, the run up for Christmas, officially began with a fresh meat feast. In Ireland, the feast began the previous night when the front door and four corners of the house were sprinkled with fresh blood from a slaughtered animal, and it’s still traditional on that night to have a roast pork dinner. The date was seen as a turning point in the year–rents and contracts were often due at Martinmas–and the official start of winter, and the time to traditionally eat goose. And here’s a useful hint for your Martinmas goose feast–take a close look at the breastbone. If it’s a fair, clear bone, then winter will be cold and frosty. A dark bone indicates warmer temperatures with snow and sleet.

Of course we’ve had Christmas thrust down our throats for months already, but what are your plans for Christmas? It’s getting close… how ready are you?

Jane Lockwood is guest blogging over at Romance Sirens. Come and say hello!