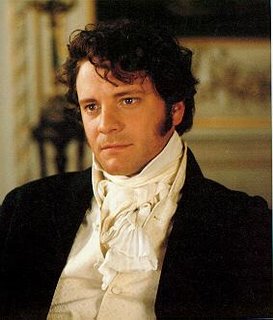 Last week, my father (who also doubles as my Regency research partner) was in Brooklyn for a visit. Friday night, he poked around my DVD collection and found the BBC version of Pride & Prejudice; he had just visited my aunt, his sister, and seen the 2005 version, and wanted to compare with the one he’d heard was truer to the text (my dad wrote a paper on Emma in college, so he’s up on Austen).
It was 8:30 by the time we sat down to watch, and I warned him this version was at least five hours long, and I knew neither of us would be up that late. We stopped watching at the end of the first DVD (of the two-disc set), right when Elizabeth refuses Darcy’s first offer of marriage.
Whew. It was really, really hard to stop watching right there, right at the emotional black moment of the film. But how perfect its placement was–right as you’re realizing Darcy has feelings for Elizabeth (courtesy of Colin Firth’s guardedly melting glances), and Elizabeth is piqued by Darcy, although not yet willing to admit it, even to herself, he proposes in his characteristic blunt Darcy way.
The scene closes with her telling him that he would be the last man on earth she would ever contemplate marrying, and he tells her he understands perfectly, and will never bother her again. They separate, leaving behind our palpitating hearts.
Austen’s build-up to that moment is magnificent, as is her gradual threading together of our hero and heroine’s lives. It’s hard to believe, only one DVD disc later, that Elizabeth and Darcy will ever get to a place where they can be together.

Do you agree with my analysis of P&P as having a Big Misunderstanding?
What examples of a GOOD use of a Big Misunderstanding can you think of? Do you mind them in your novels? Can you envision any situation with a Big Mis that would make as much sense as the ones in P&P? And don’t you feel sorry for my dad, who had to return to Cape Cod without seeing the second half?