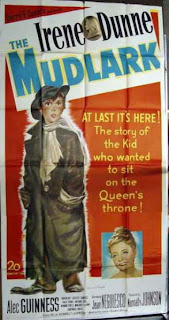 Megan said, “Monday is Blog Action Day; so far there are over 11,000 blogs participating, and on October 15, every blogger will be talking about the environment. Maybe your blog (speak for yourself, Megan! I am!) doesn’t have the hugest amount of visitors, but if every little voice joins together, we’ll create a magnificent din.”

Being such an energy and natural resource consuming society is a rather modern occurrence and confined to the more prosperous parts of our world, like the USA. It would have been much different in the Regency. In those times, the very poor survived on what we would throw away.

Janet has already taught us that our lords and ladies gave away their clothing to their servants who also had certain rights to recycle things like candle stubs and cooking fat. What the servants didn’t use was sold to the rag and bone man, the era’s answer to what we would call the junk man. The rag and bone man sold what he collected. 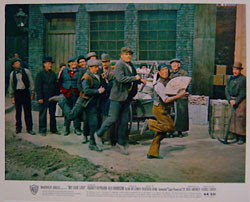 All the dust and ashes from the cooking fires and fireplaces also had to be collected and carted away. This was the work of the dustman. The dust was sold to brick makers and to farmers for fertilizer. In the musical My Fair Lady, Eliza’s father was a dustman.

Here is an article from the New York Times January 27, 1878, about London Dustmen: 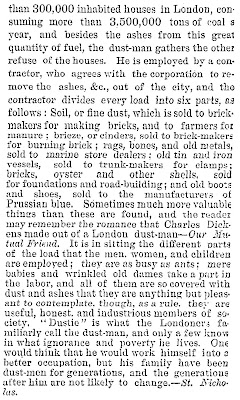 Another set of recyclers were the mudlarks, mostly women and children who scavenged around in river mud for items of value. In London the poor would scavenge in the River Thames during low tide, searching for anything they could sell.

A bit later than “our” period (1851), Henry Mayhew wrote about mudlarks in his book, London Labour and the London Poor:

“ THEY generally consist of boys and girls, varying in age from eight to fourteen or fifteen; with some persons of more advanced years. For the most part they are ragged, and in a very filthy state, and are a peculiar class, confined to the river. The parents of many of them are coalwhippers–Irish cockneys–employed getting coals out of the ships, and their mothers frequently sell fruit in the street. Their practice is to get between the barges, and one of them lifting the other up will knock lumps of coal into the mud, which they pick up afterwards…..
Some of them are old women of the lowest grade, from fifty to sixty, who occasionally wade in the mud up to the knees. “

You can read more of Mayhew’s book here.

Of course, raw sewage was dumped in the river and the mudlarks were exposed to cholera and other diseases, as well as really nasty things like dead bodies of people and animals.

The movie poster above was for a 1950 movie about a little boy, a mudlark who overheard someone say that Queen Victoria was mother to everyone in Great Britain. He took it to heart and traveled to London to see if he could sit on the throne.

I can’t sign off without mentioning my friend Delle’s book, The Mudlark. Read more about it here.

What do I do for the environment? I recycle glass and plastic and cans. And I drive a Prius, Toyota’s hybrid car! I’ve also been conserving water because we’re really having a bad drought. And I NEVER throw out a book.

What do you do?